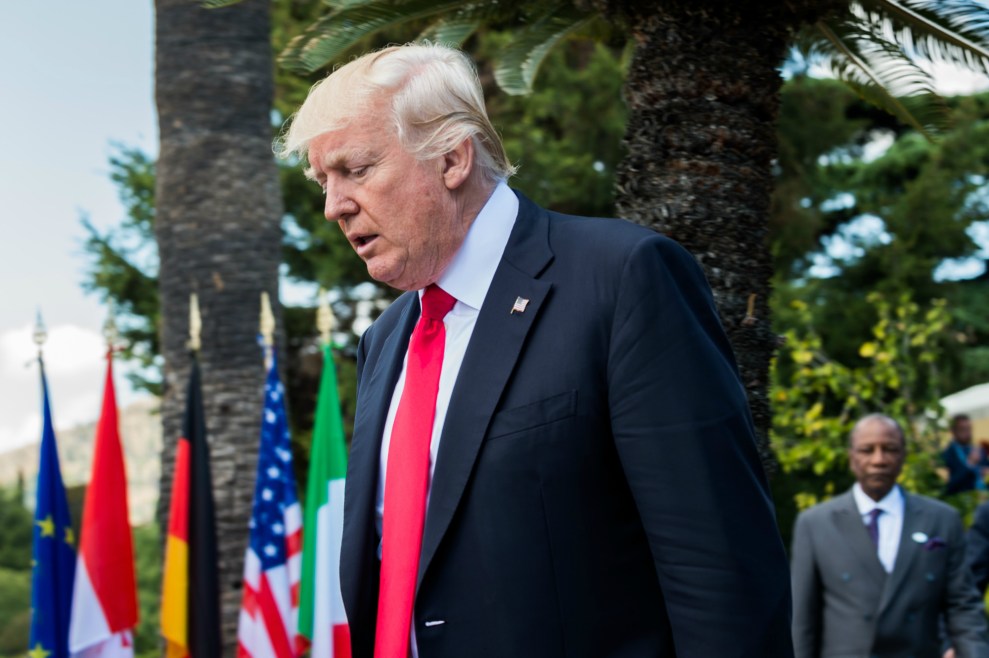 The negotiations leading up to the Paris climate accord involved years of delicate diplomacy and thousands of voices offering guidance. President Donald Trump’s handling of the decision to leave was the polar opposite.

Despite claiming that he’s been “hearing from a lot of people,” Trump doesn’t appear to have any more detailed knowledge of climate change or the 2015 deal now than when he first pledged to cancel it on the campaign trail. The “lots of people” he’s heard from include a disproportionate number of climate change deniers, even though there are far more leaders in industry and on both sides of the aisle advocating for the US to remain in the agreement. They have argued that the Paris deal is important to the US, not just for its environmental merits, but also so that the country is not excluded from the rest of the world, both economically and politically.

His months of hints and delays on a decision have drawn more than one comparison to The Bachelor reality show, but one with the highest of stakes. He recently went to the strongest US allies at the G-7 without a clear answer, leading the G-6 to isolate the US when it issued its communiqué that reaffirmed the agreement. As Washington Post columnist Greg Sargent noted, Trump’s nationalist case to exit Paris “does not allow space for recognition of what the Paris deal really is, which is constructive global engagement that serves America’s long term interests, as part of a system of mutually advantageous compromises.”

Trump doesn’t have any sense of the backlash that’s coming for him and the US now that he’s kickstarted the process of pulling out, which won’t be official for another three years. Two factors will especially hurt the US: First, the world has been dealing with the US as an unreliable partner on climate change for more than two decades, and leaders still well remember the other times the US reversed course on its promises; second, the world has never been more aligned in favor of action, making climate change a much bigger factor in the US relationship with its allies in non-climate related issues—from trade to defense to immigration—than it once was.

Trump officials might have taken note of the consequences of US inconsistency with the 1997 Kyoto climate treaty. President Bill Clinton signed the treaty, which had binding targets, but never submitted it to the Senate for ratification. In 2001, Bush officials declared Kyoto dead and withdrew the US from the agreement. International backlash ensued. Some in the Bush administration, which like Trump’s was split on how to handle Kyoto, came to regret how it was handled for the damage it did to the standing of the US in the world.

“Kyoto…was not handled as well as it should have been,” Colin Powell said. “It was a sobering experience that everything the American president does has international repercussions.”

“Kyoto—this is not talking out of school—was not handled as well as it should have been,” Bush’s Secretary of State* Colin Powell said in 2002. “And when the blowback came I think it was a sobering experience that everything the American president does has international repercussions.”

In her 2011 memoir, then-national security adviser Condoleezza Rice detailed the reaction Bush faced in meetings with European leaders. Because of the way the administration handled the abrupt withdrawal, “we suffered through this issue over the years: drawing that early line in the sand helped to establish our reputation for ‘unilateralism.’ We handled it badly.” Rice called it a “self-inflicted wound that could have been avoided.”

US withdrawal also shifted the power dynamics across the world and gave Russia, which signed the agreement, greater leverage in international affairs. Russia’s ratification became pivotal to the treaty entering into force, and in turn, it used its ratification to gain Europe’s backing to enter the World Trade Organization, even while the US still had outstanding concerns. President Vladimir Putin noted in 2004 that the “EU has met us halfway in talks over the WTO and that cannot but affect positively our position vis-a-vis the Kyoto Protocol.” Paris has already met the threshold needed to go into effect, but Russia is still pursuing a similar role and reaffirmed its commitment to the Paris accord today, seasoned with some light trolling: “Of course the effectiveness of implementing this convention without the key participants, perhaps, will be hindered,” a Kremlin spokesperson told CNN. “But there is no alternative as of now.”

We’re decades away from the Kyoto treaty now, but many experts expect a US exit from Paris not to weaken the world’s resolve in addressing climate change as much as it will create a power vacuum other countries might be eager to fill. Andrew Light, a senior fellow with the World Resources Institute, says it is “definitely going to hurt the US with respect to other countries sitting down and negotiating on anything the US is interested in.” Light, who was a State Department climate official in the Obama administration, argued, “We’re creating a vacuum in parts of the world where we have very clear security interests, not just climate, but security in North Africa, the Middle East, and Southeast Asia. It creates an opening that China, the EU, and even India can step in and fill.”

In a New York Times op-ed earlier this month, George Shultz, a former Cabinet member of the Reagan and Nixon administrations, and Climate Leadership Council’s Ted Halstead wrote, “Global statecraft relies on trust, reputation and credibility, which can be all too easily squandered. The United States is far better off maintaining a seat at the head of the table rather than standing outside. If America fails to honor a global agreement that it helped forge, the repercussions will undercut our diplomatic priorities across the globe, not to mention the country’s global standing and the market access of our firms.”

It’s little surprise that Trump’s own secretary of state, Rex Tillerson, agrees, preferring the US to retain a seat at the table.

To find the kind of momentum it eventually gained to enter into force in record time, negotiators in Paris had to bridge differences between developing and industrialized nations. “One of the great achievements of Paris, but sometimes overlooked, is it gave a very strong signal that climate change is no longer an isolated area of diplomacy,” Light says. For example, climate change and renewable energy became building blocks in the US relationship with India, leading eventually to a bilateral commitment on climate change in the run-up to Paris.

While the US retreats, other nations are going to be building bridges with China as it curbs its sizeable greenhouse gas footprint. That’s already happening: This week, the EU and China engaged in a climate summit where they signaled their “highest political commitment” to Paris, just as Trump pulls out. This will also not help the US president in his much-vaunted fight against terrorism. He’s losing goodwill not just with Europe, but with partners in developing nations that stood to benefit from the $3 billion commitment the US had made to climate finance—another commitment that Trump won’t deliver on. That means losing one of the main ways the US has built friendly relationships with countries that can otherwise be fraught with tension. Former EPA Administrator Gina McCarthy offers China as an example: “The South China Sea. Human rights. Trade. Currency manipulation. When U.S.-China relations are discussed we often ascribe these issues some level of tension. However, our countries’ cooperation has historically been more cordial and productive in one area: environmental protection.”

Union of Concerned Scientists’ Director of Strategy and Policy Alden Meyer, a longtime expert on the UN climate process, compared the US to the cartoon character Lucy in the Peanuts comic strip, always taking away the football from Charlie Brown at the very last moment. The rest of the world is likely to become weary of the US constantly taking away the ball when it comes time to negotiate tough issues like trade and terror, which Trump has sought to champion.

Or as United Nations Secretary-General António Guterres put it this week, countries all over the world have only two options on climate: “Get on board or get left behind.”