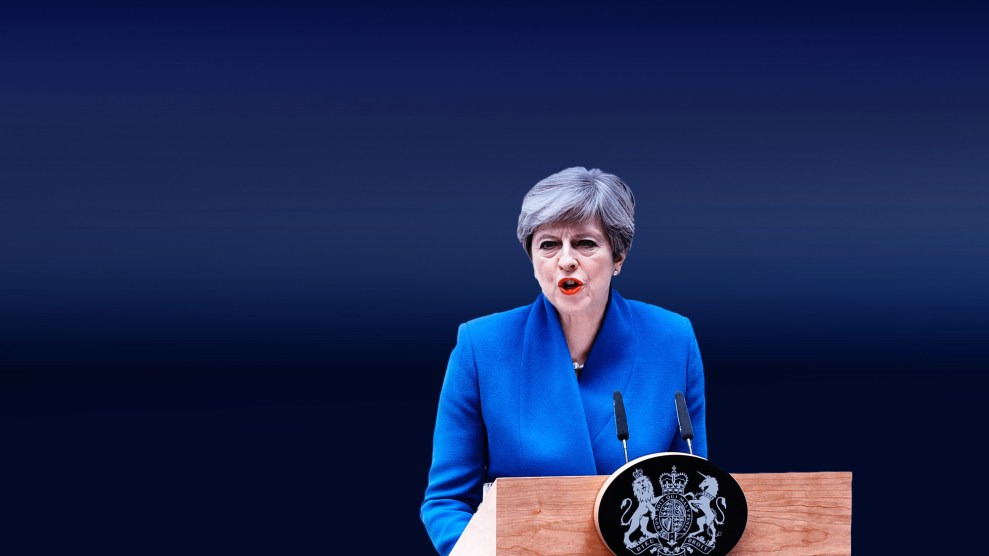 After watching her majority evaporate during in Thursday’s election, UK Prime Minister Theresa May today finds herself scrambling to form a minority government to stay in power. To do that, May is cobbling together an alliance between her Conservative party and a party in Northern Ireland known for a number of hardline views—including climate change denial.

May’s party ended up with 318 seats in Parliament; that’s eight short of the 326 needed for a majority but still more than any other party in Parliament. Despite mounting calls for her resignation after the shock hemorrhaging of votes to the Labour Party led by Jeremy Corbyn, May visited the Queen on Friday as part of a post-election ritual in which the leader of Parliament’s largest party asks for permission to form a government.

But to do so, she’ll need to be propped up by the Democratic Unionist Party (DUP)—a conservative Northern Ireland party that has now promised to guarantee May’s government can operate in Parliament (but has stopped short of entering a formal coalition.) The DUP will take 10 MPs to Westminster, potentially putting May in charge by the thinnest of margins.

The DUP was established in 1971 as a unionist party with traditional links to Protestant churches. It supports remaining part of the United Kingdom and opposes efforts by republican, predominately Catholic parties—such as Sinn Fein—to create a united Ireland. It continues to be populist and staunchly socially conservative, opposing abortion and gay marriage. Its founder once called homosexuality “immoral, offensive and obnoxious.”

As the Economist explained Friday, “The DUP is a movement rooted in conservative and ultra-conservative forms of Christianity” and consists of “a mixture of old-time religion and secular nativism.”

While May’s own climate advocacy has been somewhat muted, she said recently the US withdrawal from the landmark Paris agreement was a “disappointment” and that the UK remained committed to the 2015 deal. (She didn’t join other European leaders in a strongly-worded joint statement criticizing the US, however.) Her party’s election manifesto—the cornerstone document of the party’s campaign— commits the party to “lead international action against climate change.”

On the other hand, the DUP’s 2017 manifesto does not mention the words “climate change,” “global warming,” or “environment” at all.

The #DUP is stuffed with climate change deniers, homophobes and misogynists. May's alliance is a dishonourable coalition of chaos.

Your now hourly reminder that DUP politicians do not just deny science of climate change, but also evolution too.. https://t.co/hMnGNpTegT

The DUP once appointed an environment minister to the Northern Ireland Executive who has called climate action a “con” and denied the scientific linking warming to human activity. In 2008, then-DUP minister Sammy Wilson (who was reelected to Parliament Thursday night) told the Belfast Telegraph, “I think in 20 years’ time we will look back at this whole climate change debate and ask ourselves how on earth were we ever conned into spending the billions of pounds which are going into this without any kind of rigorous examination of the background, the science, the implications of it all.”

Wilson hosted a “Climate Fools Day” event in 2010, drawing climate deniers from around the country. According to the bio on his website, Wilson “believes that climate change is not man-made and the myth of climate change is based on dodgy science not proven. He is not a fan of the Green Lobby who try to scaremonger people with their alarmist views.”

Recently, Wilson sounded-off about the Paris climate agreement—while praising President Donald Trump for promising to withdraw from it.

DUP's Sammy Wilson described the Paris Agreement as 'a delusion … a piece of window dressing for climate chancers' https://t.co/tlmbzM6X88 pic.twitter.com/pCnG5OZiBr

“The Paris Agreement itself is a delusion,” wrote Wilson. “So pulling out of the agreement, which was only a piece of window dressing for climate chancers who wished to pretend that they were doing something about an issue which they can’t affect anyhow, is not the disaster which the green lefties are getting hysterical about.”

The DUP’s Michelle McIlveen also blocked the introduction of climate change legislation in the Northern Ireland parliament last December when she was environment minister, according to The Belfast Telegraph—making Northern Ireland the only place in the UK not to have passed its own laws to cut carbon emissions.

Wilson isn’t the only notable DUP leader to espouse anti-science views. Senior DUP officials have advocated for teaching creationism in schools. One DUP politician, Edwin Poots believes, in a “young earth” created 4,000 B.C. “You’re telling me that cosmic balls of dust gathered and there was an explosion,” he said during a 2007 debate. “We’ve had lots of explosions in Northern Ireland and I’ve never seen anything come out of that that was good.”