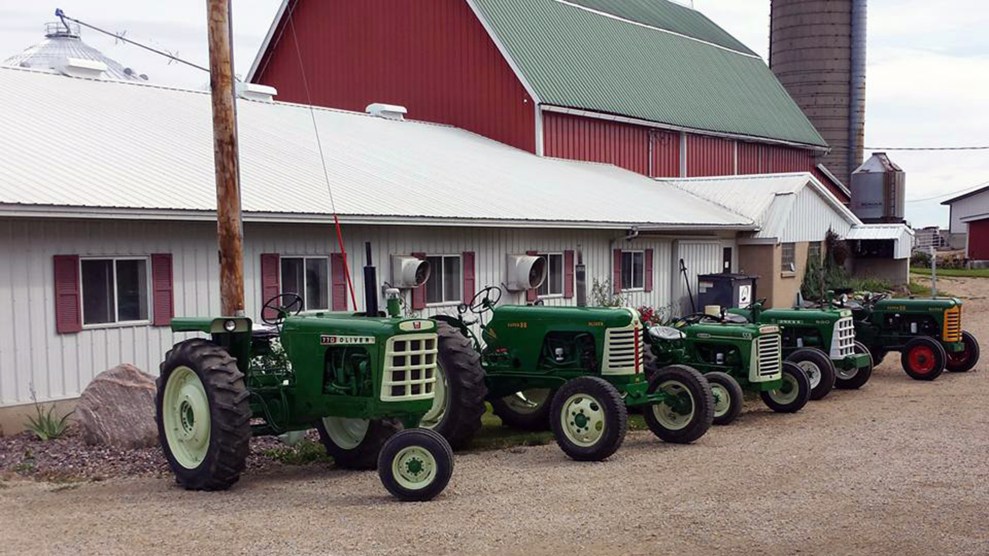 Not many people have jobs that are as physically demanding as Tina Hinchley’s. With her husband and four children, Hinchley, 51, milks 130 cows twice a day and works the corn and soybean fields on her family’s 2,500-acre farm in southeastern Wisconsin. To keep things running smoothly, Hinchley says the whole family needs to be healthy and strong. But like everyone else, sometimes farmers get sick.

That’s what happened to Hinchley about a decade ago. She began having intense headaches and blurred vision, but her family couldn’t afford health insurance, so she soldiered on milking the cows and working the land. “Typical farmer,” she said. “If it’s not bleeding profusely, hanging off, or something that you would treat if it’s an animal, we don’t run to the doctor.”

But Hinchley’s symptoms got so bad that she could no longer work in the barn, so her children had to pick up the slack, each of them milking dozens of cows before catching the school bus at 6:45 a.m. When she finally went to the clinic, the doctor immediately ordered CT scan, which revealed a brain tumor. She was scheduled for surgery right away.

Luckily, it went well: The surgeon removed the tumor, which turned out to be benign. But then the bill came: $187,000. Hinchley and her husband thought that maybe they would have to sell off their land. They ultimately scraped by, but Hinchley worried constantly. “When we don’t have health care, it’s scary,” she told me. “There is always the fear of: ‘If something happens, we could lose the farm.'”

So in 2012, when the Affordable Care Act went into effect, Hinchley signed up for insurance right away.

That decision may have saved her life. In 2013, Hinchley was diagnosed with another benign brain tumor as well as breast cancer. It was an extremely difficult time for the family, but having health insurance lightened the burden. “It was just an ease,” Hinchley said.

The worries that Hinchley had before she got health insurance are common among farmers. A survey (PDF) released earlier this month from the University of Vermont and the University of Chicago found that nearly half of farmers are afraid they will have to sell land at some point to pay for health-care-related costs.

Those fears make sense, because farmers have elevated health risks. The survey found that two-thirds of farmers have preexisting conditions. They’re also aging: The average American farmer is 58.

Most importantly, farming is one of the most dangerous jobs out there. Farming and ranching routinely make the Bureau of Labor Statistics’ list of top 10 deadliest jobs. (PDF) A Politico piece noted in April that farmers “are nearly twice as likely to die on the job as police officers are, five times as likely as firefighters, and 73 times as likely as Wall Street Bankers.”

Because their jobs are so risky, most farmers—90 percent—do have health insurance, the survey found—but many get it through an off-farm job. Lindsey Lusher Shute, director of the National Young Farmers Coalition, worries about that trend. She points out that as the current generation of farmers ages, younger people might not be willing to take their place if they know they’ll have to work an off-farm job for health care. “It’s hard enough to attract young people to farming, but to expect them to farm without health insurance is unreasonable,” she said. “There has to be insurance available. It has to be comprehensive and affordable. If those things are in place, we have some hope of attracting young people to farming. If they’re not, the situation is dire.”

The National Farmers Union has echoed those concerns. Last month, the group spoke out sharply against the Trump administration’s attempts to dismantle the Affordable Care Act. “It is critical that our health care policy protects those individuals currently working in the agricultural sector, especially those with pre-existing conditions,” NFU President Roger Johnson noted in his congressional testimony last month. “Of equal importance is ensuring that health care costs do not serve as a barrier for young and beginning farmers.”

“It’s hard enough to attract young people to farming, but to expect them to farm without health insurance is unreasonable.”

Hinchley, meanwhile, is back to milking the cows and tending the crops. Her cancer is now in remission, but she worries constantly about what could happen if she and her husband lose their health insurance. “I could get cancer again,” she says. “I could have a brain tumor again. We are getting older. I am more klutzy. I could easily hurt myself. We are not young chickens anymore.”

Her daughters are now in college, and she hopes that one of them will take over the dairy operation when she graduates. The farm has been in her husband’s family for generations, and she’d hate to lose it.

“We love what we do,” says Hinchley. “We can handle struggle. But you can’t do it with a missing arm. You can’t do it if your spouse is in the hospital.”