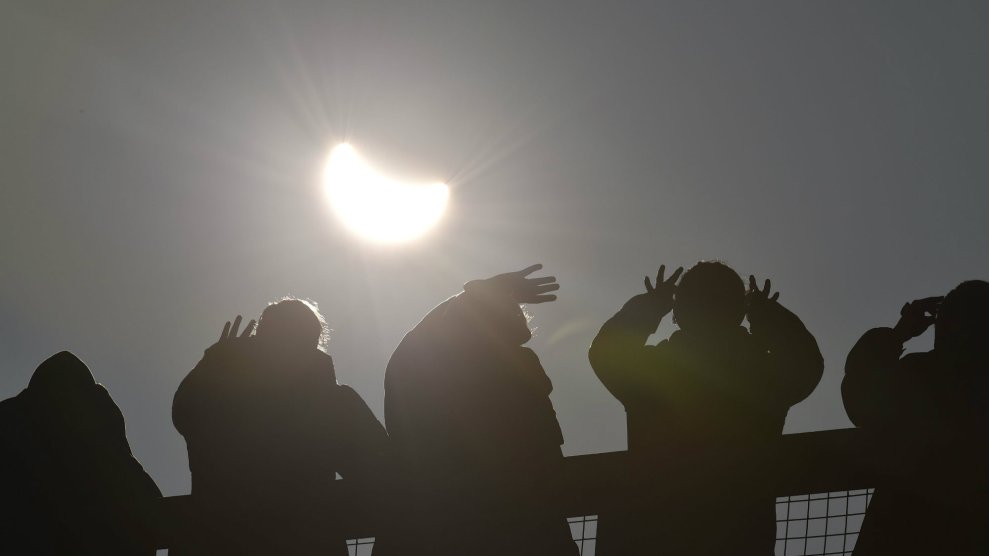 Many ancient cultures worshipped the sun and moon, or at the very least saw them as supernatural beings. In the sky, their movement proceeded with a constancy and regularity that gave people a sense of order in the universe. In these societies, which universally imparted great significance to the activities of these heavenly bodies, a violent and sudden darkening of the sun was a cause for alarm and foreboding.

That’s because a disruption of the sun and moon meant a disruption of the regular, predictable rhythms of everyday life. Ancients texts from China, Mesopotamia and Greece that mention solar eclipses, all suggest the phenomena “were just trouble,” says Ed Krupp, director of the Griffith Observatory in Los Angeles. “They represented a serious disturbance in the natural order of things.”

Different cultures have different ways of explaining why eclipses happen, but the stories generally share a theme of the sun being “devoured.” The Chinese word for eclipse, rishi, is composed to the characters for “sun / day” and “eat.” (The word eclipse itself derives from the the Ancient Greek root for abandonment, ékleipsis, which makes sense as the Greeks viewed the eclipse as the sun “abandoning” the earth, Krupp explains.)

Several East Asian cultures believed the eclipse was caused by a giant frog eating the sun, and in China, myths tell of a dragon doing the devouring, Ruskin says. In Norse mythology, the eclipse was the result of two sky wolves, Sköll and Hati, chasing and finally eating the sun, leading to its temporary disappearance, Krupp adds. (Some scholars doubt the veracity of that interpretation, however.)

Many cultures thought that such a disastrous event required their immediate action to help restore order. Ancient Chinese and Mesopotamians made loud noises to scare away the spirits or creatures doing the devouring. Hugh Lenox Scott, who at the time was a member of the U.S. Cavalry and later a superintendent of West Point, recorded his observations of the Cheyenne tribe during the solar eclipse of 1878. “They became very much excited when the eclipse began, shooting off guns and making every sort of noise they could to frighten away the evil medicine which they thought was destroying the sun,” Scott wrote.

“They became very much excited when the eclipse began, shooting off guns and making every sort of noise they could to frighten away the evil medicine which they thought was destroying the sun.”

The eclipse was a bad omen for many ancient civilizations, but how such an omen was interpreted varied greatly by culture. “An eclipse of either the sun or moon is looked upon as a terribly calamity, being sure to be the forerunner of disease or death,” wrote J.G. Wood on the beliefs of Australian Aborigines, in his 1870 tome The Natural History of Man. In Ancient China, solar eclipses were a sign that the emperor, viewed as partially divine, had done something wrong. In Mesoamerican cultures, they were occasions for human sacrifice to ward off evil, Krupp adds.

Sometimes, however, the event was explained away. In several references from China and Mesopotamia, royal astronomers interpreted the eclipse “as bad news for somebody else… some other king or country,” Krupp says.

Most of the records of the eclipse speak only about what happens during the celestial event, but usually the record ends there. As we all know, the sun returns after its short time away. Or, at least, it has to this point in history.

In light of the dread eclipses induced, perhaps people from several centuries past felt a certain sense of relief when the eclipse ended. As Scott wrote of the Cheyenne’s noise-making: “Their treatment was highly successful—the sun recovered.”