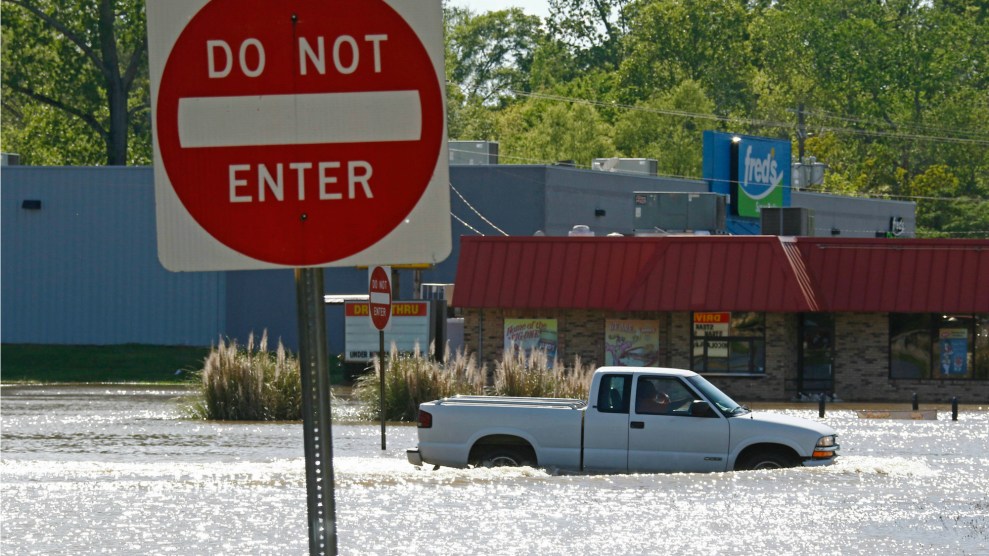 Update 4:48 p.m.: Trump signed his infrastructure executive order Tuesday afternoon at Trump Tower before making a statement and taking questions that mostly revolved around Charlottesville. “We are literally like a third world country,” he claimed in reference to the state of the nation’s infrastructure. Trump didn’t mention that the order revokes Obama’s flood-risk program.

In his latest executive order, President Trump is expected to tell the federal government to ignore the best science out there on sea-level rise and flooding and build infrastructure projects in risky, flood-prone areas anyway.

At a signing ceremony that will take place at his New York City Trump Tower on Tuesday, Trump will reportedly reverse an Obama-era policy from 2015 that directed agencies to set stricter standards for where roads, buildings, public housing, and other infrastructure projects receiving federal funds can be built. Before the 2015 order, federal agencies usually relied on historical data for predicting vulnerability to flooding instead of on future projections of sea-level rise. The order required higher elevation standards for road, bridges, and other infrastructure projects, with even stricter requirements for critical sites such as hospitals and evacuation centers.

Multiple outlets are now reporting that Trump’s impending order will tell agencies to revoke these standards. States and cities would still be able to pursue the stricter flood-risk requirements.

The president and his administration have designed most of their policies in spite of what federal scientists have to say about sea-level rise and climate change, but this reversal has already been characterized as especially ill-conceived.

“The fundamentals of the Obama policy were pretty simple: The taxpayer isn’t going to spend a vast amount of money to subsidize stupid things,” such as building vulnerable, flood-prone infrastructure, says Eli Lehrer, president of the R Street Institute, a group that advocates a libertarian approach to addressing climate change. “This is a terrible idea for taxpayers. Undoing it is likely to waste billions of dollars with no benefit to speak of for anybody.”

Sierra Club Executive Director Michael Brune added that Trump’s plan not only wastes taxpayer money, but puts people in danger. “This is climate science denial at its most dangerous,” he said in a statement. “Trump is putting vulnerable communities, federal employees, and families at risk by throwing out any guarantee that our infrastructure will be safe.”