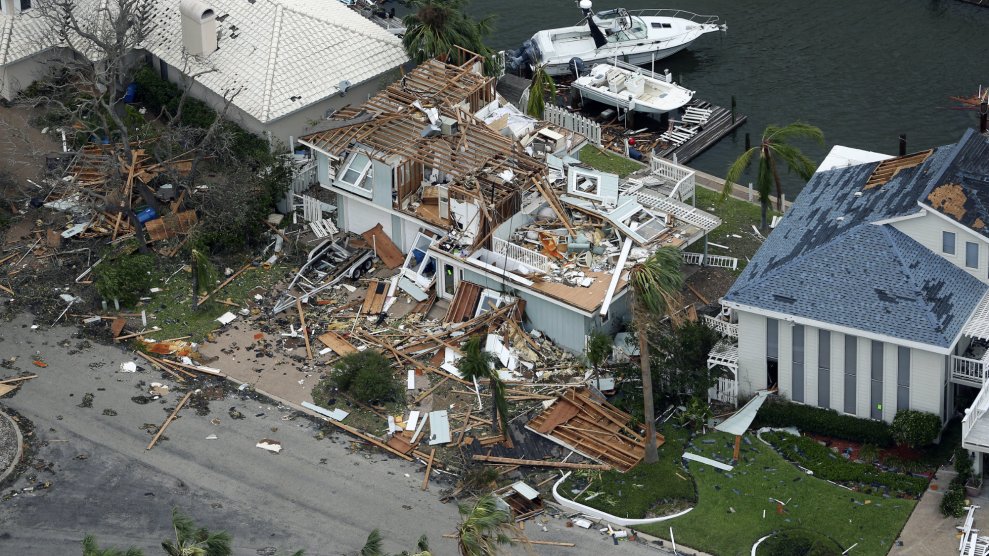 Right now, the Federal Aviation Administration has imposed a ban on drones flying over Houston, which is still weathering what some climatologists are calling the worst storm in U.S. history. But once the rains and the winds die down, that ban will be lifted, and hundreds of flying robots will ascend above the city and region to assess Hurricane Harvey’s damage.

More than 2 million people live in Houston, and as many as 13 million live in the wider region affected by the storm. That means millions will probably get paid out by insurance companies. But this year, instead of relying on insurance adjusters with hardhats and clipboards to climb onto claimants’ roofs and decide what they are owed, insurance companies in many cases will use drones to inspect the aftermath.

“This will be the widest scale event that we’ve used drones for to date,” said Justin Herndon, a spokesman for Allstate. Herndon says his company expects to conduct hundreds of drone flights per day after Harvey—thousands a week. Farmer’s, another major property insurance company, is also planning to deploy drones for the same purpose. The drones that most insurance companies will use aren’t huge; they fit in a medium-sized suitcase and are packed with high-resolution cameras that can take aerial images of roofs and property. It’s not always safe for a person to walk on the roof of a severely damaged building, and some areas are often impossible to assess until other parts are repaired or special rigging is used. Having a robot take those photos instead is safer, faster, and cheaper.

(Telecom companies also say they have drones on hand to inspect infrastructure after Harvey. Last year, in the wake of Hurricane Matthew, when the roads were too submerged for cars to drive, Verizon flew drones to check cellular site locations for connectivity and damage, which was more efficient than driving a boat with technicians to check each site individually.)

Drones mean that the insurance-claim professionals who will be assessing the damage won’t actually have to be there for the inspection. Allstate, for example, gets permission from the homeowner to ask if they’re OK with a drone conducting the inspection, after which it sends out technicians from a drone company with which it contracts to conduct the flights and take the high-definition images. Those images are sent directly to a claims specialist. And while that probably hugely expedites an otherwise-lengthy the process, it also means that the people who will depend on their insurance payout won’t necessarily meet face to face with the people adding it up.

Hurricane Harvey could leave Texas with as much as $30 billion in damages, according estimates from Enki Holdings, an analytics firm that spoke to the New York Times, though only 40 percent of that may be covered by insurance. Victims of Harvey who do have some form of a private safety net will probably want to get whatever they can to start rebuilding their lives. And for the first time, many are going to be asked if they’d like to have a robot come out and assess their losses—a potentially less precise and certainly less personal process, but at least a shorter one.