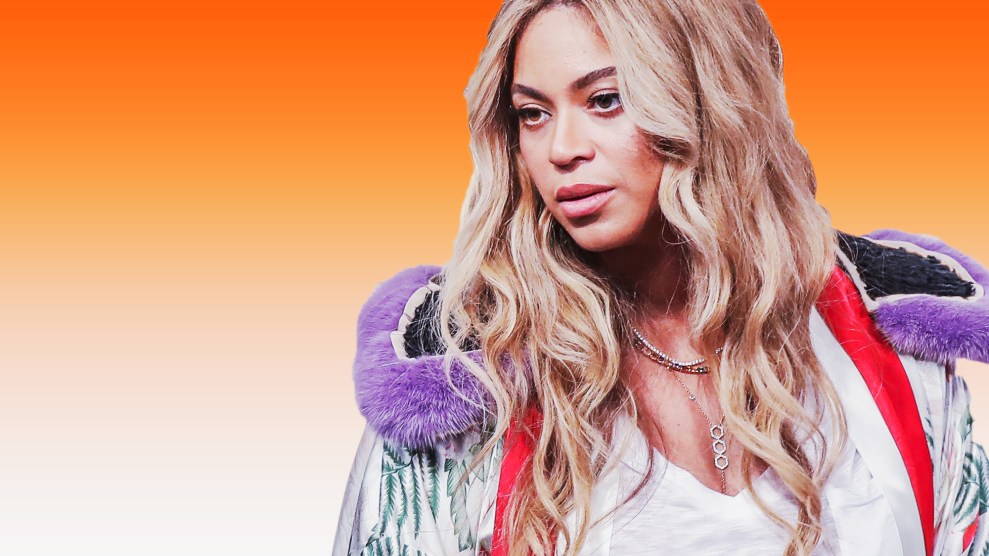 Beyoncé—Houstonian, pop superstar, feminist, essayist—joined other celebrities Tuesday to raise money for Hurricane Harvey disaster relief. During “Hand in Hand,” a telethon, Beyoncé took the opportunity to link the recent flooding in Houston and the catastrophic monsoon in India, to man-made global warming.

“The effects of climate change are playing out around the world every day,” the singer said. “Just this past week, we’ve seen devastation from the monsoon in India, an 8.1 earthquake in Mexico and multiple catastrophic hurricanes,” she said in a pre-recorded clip (highlights below). “Irma alone has left a trail of death and destruction from the Caribbean to Florida to the Southern United States. We have to be prepared for what comes next.”

An increasingly large body of scientific evidence shows that extreme weather is being made worse by man-made climate change. A more violent planet—wetter and hotter—likely super-sized Harvey and Irma’s destruction, writes our Climate Desk colleague, Eric Holthaus, this week. He points out that the US government’s Climate Science Special Report (leaked early to the New York Times for fear of censorship by the Trump Administration) confirms hurricanes are getting worse due to climate change: “Both physics and numerical modeling simulations indicate an increase in tropical cyclone intensity in a warmer world, and the models generally show an increase in the number of very intense tropical cyclones. For Atlantic and eastern North Pacific hurricanes and western North Pacific typhoons, increases are projected in precipitation rates and intensity. The frequency of the most intense of these storms is projected to increase in the Atlantic and western North Pacific and in the eastern North Pacific.” The same is true for the annual monsoons in India.

But earthquakes, like the one in Mexico? That science is not so clear, ‘Yoncé.

Bill McGuire, a climate professor at University College London, argued in his 2013 book, Waking the Giant, that climate change could produce more “extreme geological events”—earthquakes, tsunamis, and volcanoes. He contends that shifting water from melting ice caps and long-term extreme rainfall could disrupt the Earth’s delicate, interconnected web of tectonic plates. And while we don’t yet know enough about exact triggers of individual earthquakes, one example McGuire pointed to later was the Nepal earthquake in 2015: the weight and size of the South Asian monsoon might have caused a build up of energy around the Himalayan plates that grind together to produce powerful earthquakes. He put the phenomenon this way in The Guardian:

Across the world, as sea levels climb remorselessly, the load-related bending of the crust around the margins of the ocean basins might – in time – act to sufficiently “unclamp” coastal faults such as California’s San Andreas, allowing them to move more easily; at the same time acting to squeeze magma out of susceptible volcanoes that are primed and ready to blow.

Others have expressed some skepticism about McGuire’s thesis. Roland Bürgmann from the University of California, Berkeley, is quoted as saying “it would take a long time.” (A thorough and accessible review can be found at Yale’s “e360” podcast.)

Earthquake thing aside, Beyoncé still knows more about the science than most of Congress and the White House. EPA chief Scott Pruitt told CNN ahead of Irma that it was “insensitive” to talk about climate change while the storm hit. President Trump has previously called it a hoax. On Twitter, Beyoncé’s video was compared directly to President Trump’s response to Harvey:

Beyoncé has done more about climate change than the president.

This isn’t the first time I’ve shoe-horned Beyoncé into Mother Jones climate coverage. In 2013, record industry data suggested that releasing her self-titled fifth album online first, instead of as a CD, might have cut greenhouse gas emissions by up to 80 percent compared to a regular release.