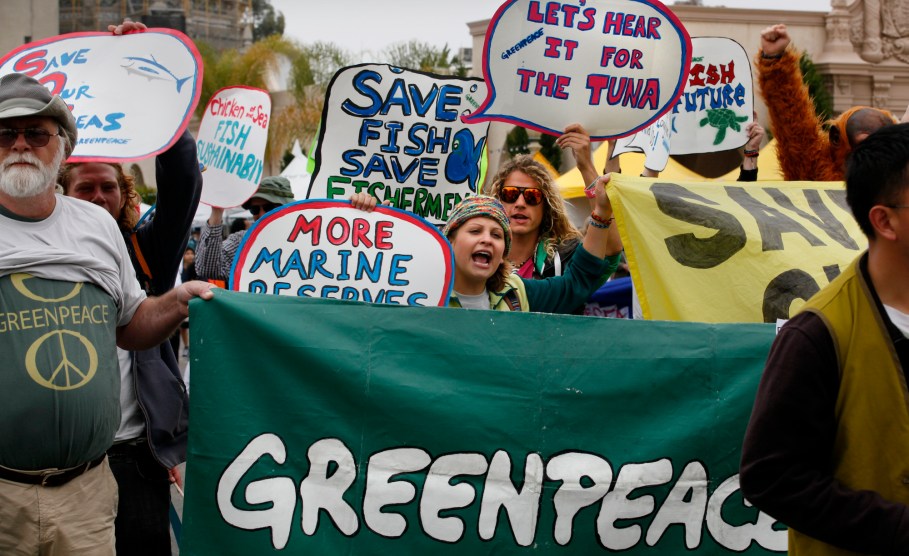 On Monday, a federal judge in California dismissed a case from Resolute, the giant logging and newsprint company, against Greenpeace and other environmental activists. This is good news for the international environmental organization that had $300 million at stake if it lost the lawsuit. But the nature of the case worries First Amendment advocates.

Increasingly, Greenpeace has become the target of major corporations that have argued its aggressive campaigning, which sometimes involves taking over oil rigs and raising protest banners on skyscrapers, constitutes “illegal enterprises” better suited to prosecution under a law that’s known for going after the Mafia. The environmental group has charged that the lawsuits constitute a threat to free speech and civil disobedience that are fundamental to the very existence of many activist groups—not just Greenpeace—meaning that billions of dollars could ultimately be at stake.

Resolute Forest Products used the Racketeer Influenced and Corrupt Organization Act (RICO) to accuse Greenpeace of “fraudulently” inducing people all over the world “to donate millions of dollars based on materially false and misleading claims about its purported environmental purpose and its ‘campaigns’ against targeted companies.” They argued that “soliciting money, not saving the environment, is Greenpeace’s primary objective, it has demonstrated time and time again that it will do anything to drive donations, including fabricating evidence.”

The conflict between Resolute and Greenpeace dates back nearly a decade to a campaign Greenpeace ran in Canada alleging that the company wasn’t honoring its obligations in an agreement to stop logging in the most sensitive areas of the boreal forest. Greenpeace and the forest advocacy group Stand.earth embarked on a campaign labeling the company a “Forest Destroyer.” Resolute sued Greenpeace for defamation in Canada, arguing there wasn’t evidence for the groups’ claims, and followed that pending case with a lawsuit filed in a Georgia court, which was later transferred to California. Resolute claimed it suffered a $100 million loss (in Canadian dollars) in business from Greenpeace’s activism. RICO authorizes much higher payouts than in other types of defamation cases—which can triple the damages.

Greenpeace argued in a motion to dismiss that the case was “an effort to muzzle protected speech,” and fell under California’s definition of a strategic lawsuit against public participation, or SLAPP. Not all states have laws protecting defendants from SLAPP cases, but California does.

Judge Jon S. Tigar agreed, and on Monday granted Greenpeace’s motion to dismiss the case. He found that Resolute failed to prove any of its claims of true harm, racketeering, or other specific misconduct. Tigar also noted that the Greenpeace campaign against Resolute “appear[s] to be shielded by the First Amendment as statements that are not ‘provable as false,’ or statements that ‘cannot reasonably be interpreted as stating actual facts.'”

Free speech advocates also consider the case to be another example of a SLAPP lawsuit. Using RICO against Greenpeace “is a novel theory and it poses a real threat to organizations and individuals who engage in advocacy and speech,” says David Snyder, executive director of the First Amendment Coalition. “Frankly, I think it’s a real stretch. It is an attempted end-run around the protections that the First Amendment provides for speech and advocacy.”

“Frankly, I think it’s a real stretch. It is an attempted end-run around the protections that the First Amendment provides for speech and advocacy.”

Since the judge found that the case applies to California’s anti-SLAPP law, then Greenpeace is entitled to recover some of its attorney fees. But the judge has left the door open for Resolute to file an amended complaint, so the company’s  effort to go after the group is likely to continue.

Resolute is not alone. Leonid Goldstein, a computer engineer in Texas filed a civil RICO complaint last year against what he called the “the climate alarmism bodies,” which included 40 organizations such as Greenpeace, Sierra Club, Climate Action Network, Ceres and more. A Texas court dismissed the case in June.

“The similarities are apparent and this underhanded playbook targeting free speech should be a cause of real concern,” Greenpeace USA General Counsel Tom Wetterer said in a statement.  “We’re grateful that the court has shown today it is a losing playbook, but that doesn’t mean corporate bullies like ETP won’t stop trying to use it.”

There’s at least one obvious connection between the Resolute and Energy Transfer cases. The New York law firm Kasowitz, Benson & Torres LLP is involved in both. Its founder, Marc Kasowitz, was Trump’s longtime personal attorney, who has distanced himself from the president only recently because of investigations into Russia and the Trump’s campaign. Bloomberg reported in August that Michael Bowe, the firm’s partner handling the RICO cases, is “in touch with other companies thinking of filing their own racketeering suits.” Bowe told Bloomberg, that he was aware of others considering impending Greenpeace lawsuits “and would be shocked if there are not many more.”

Climate change denier groups and right-wing sites have heralded these lawsuits against Greenpeace. But there is a double standard here: when environmentalists floated a federal RICO investigation into ExxonMobil regarding its years of funding groups that rejected the scientific consensus on climate change, the same conservatives argued that the lawsuits (which were never filed) violated climate skeptics’ free speech. “May free speech reign and scientific inquiry prevail,” printed Breitbart in 2016.

For First Amendment advocates, these RICO cases against environmental groups are a way of distracting from more serious questions of free speech.

“It’s now apparent that there are large companies that are willing to engage in this kind of gamesmanship with the RICO law to get it to apply in an area where I firmly believe it shouldn’t apply,” First Amendment Coalition’s Snyder says. “It’s out there now, and other companies may be willing to take the same kind of step that Resolute did and subject speakers to litigation on a tenuous-at-best theory that what’s really going on is unlawful racketeering activity.”

Even if these cases are ultimately all dismissed, they still impose a significant opportunity cost for Greenpeace.

“The main reason for them to do this is not to seek justice but to distract our campaigning and strain our resources,” Greenpeace spokesperson Rodrigo Estrada Patiño said in an interview before the case was dismissed. “Greenpeace is a prime target but it’s not just about us and it’s not just about advocacy groups. It’s a clear attack on free speech and democracy should be a concern for us all.”