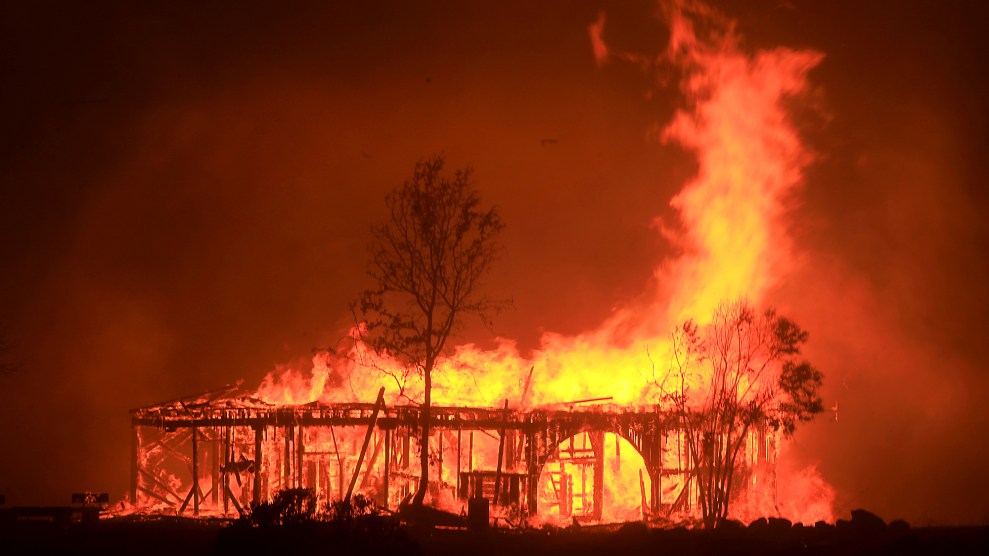 So far, the Northern California firestorm currently burning its way through Napa and Sonoma Counties has killed at least 15 people, torched at least 1,500 homes and other structures, and charred more than 100,000 acres of land. Fanned by strong and dry “Diablo” winds, the fires materialized in a matter of hours in the evening of October 8, forcing more than 20,000 people to hastily leave their homes. As of Tuesday afternoon, approximately 150 people are still unaccounted for in and around the burned out areas, and the fires continue to burn with little to no containment.

“We should be getting ready for bigger fire years than those familiar to previous generations,” wrote one scientist.

But what could become California’s one of most costly firestorms ever is only the latest in one of the country’s most destructive fire years on record. So far this year, fires in the United States have burned about 8.5 million acres of land, 42 percent more than the typical average of acres burned year-to-date over the last 10 years, and about same amount of land area as New Jersey and Connecticut combined, according to the National Interagency Coordination Center.

Climate change is a major contributing factor in the uptick of firestorms. As our planet continues to warm and weather patterns become more unstable—and as humans keep developing more land—experts expect that devastating fires like those currently searing across California’s wine country will become the norm, not the exception.

“Climate is really running the show in terms of what burns,” Park Williams, a bioclimatologist at Columbia University, wrote for a recent study. “We should be getting ready for bigger fire years than those familiar to previous generations.”

Indeed, in many places, fires are already becoming more frequent and intense. Since 1970, the average fire season length has grown about 78 days longer in parts of the American West and Alaska, according to the Natural Resources Defense Council. Earlier spring snowmelt has been linked to a dramatic uptick in western wildfire activity since the mid 1980s. And bioclimatologist Park Williams’ study, released last year, concluded that human caused climate change is responsible for doubling the amount of land burned in the American west since 1984.

By the end of the 21st century, scientists predict that more than 60 percent of the Earth’s land will be more vulnerable to wildfire than it is today, mostly in mid-to-high latitudes like the American West.

So why does climate change promote fires? One reason is that it’s just hotter than it used to be. Shorter cold winter periods and higher temperatures in spring and summer mean that vegetation and soil have more time to dry out than they have in the past, lengthening the time of wildfire season.

“What we’re seeing now is the lineage of bad decisions coming around, biting us, and threatening to devour us,” said one fire historian.

Sagara’s pendulum analogy describes exactly what’s happened in California over the past year. With roughly 90 inches of rain, last winter was officially the wettest rainy season on record across several spots in Northern California. The winter rains put an end to California’s five-year-long drought, and launched almost all of the state into most verdant spring in recent memory.

But the summer that followed was oppressively hot—the hottest on record in parts of Northern California that are currently burning, according to NOAA’s National Centers For Environmental Information:

Since the winter rains ended, much of California has been bone dry. Summer and fall are traditionally dry seasons in California, but this year has been drier than usual:

The winter rains promoted more vegetation growth, much of which dried out in the record heat and became kindling for the current fires.

The other big component to wildfire risk is the fact that humans continue to develop land in what’s called the “wildlife-urban interface,” defined where “human development meet[s] or intermingle[s] with undeveloped wildland,”  and “where wildfires have their greatest impacts on people.”

Across the United States, 99 million people live in WUI, largely in suburban developments built over the last 60 or so years, not unlike the ones burned to the ground on Monday in Santa Rosa, California. Higher population density means a greater chance of fires starting in the first place—some 84 percent of wildfires are caused by humans. And fires in these areas are often deadlier than those in wilderness areas because more people are exposed to the flames and smoke. What’s more, structures can serve as kindling.

Mike Davis, a journalist and historian who has written extensively about fire and land use in California, points out that while climate change increases the risk of wildfire, human growth into wildfire-prone areas exacerbates the issue even further.

“Climate change is so dangerous because we’ve put billions of people and trillions of dollars of property directly into harm’s way,” he said. “What we’re seeing now is the lineage of bad decisions coming around, biting us, and threatening to devour us.”