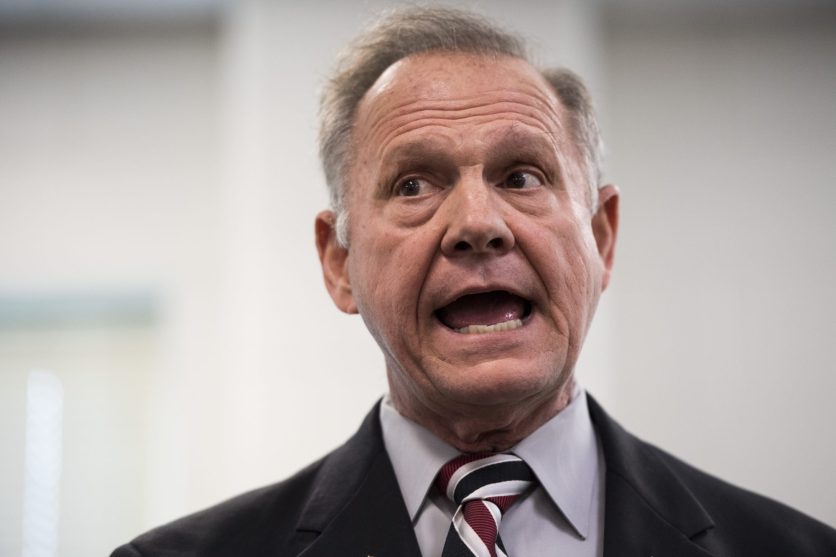 He’s written poems lamenting legal abortion. He wants to make gay sex illegal and overturn marriage equality. The former judge says he places “God’s law” above the Constitution, describes Islam as a “false religion” and has repeatedly defied federal orders to remove religious ornaments from his courtroom. He doesn’t believe in evolution, compares preschool to Nazi-style indoctrination and once said the Sept. 11, 2001, terrorist attacks were divine punishment for the United States’ godlessness.

But Moore has remained uncharacteristically subtle when it comes to climate change and environmental issues.

His campaign site calls for energy independence and stakes out the vague position: “Coal mining and oil drilling should be encouraged, subject only to reasonable regulations.” In July, he was the only candidate to refuse to answer questions about climate change for a Montgomery Advertiser story. Katie Frost, his spokeswoman, did not respond to multiple requests for comment.

The Foundation for Moral Law, the Alabama-based legal nonprofit Moore founded, has never taken a stance on climate change, a representative told HuffPost. And Alabama environmental law experts say he ruled on few, if any, cases related to environmental or fossil fuel regulations as a judge, leaving his thinking somewhat of a mystery.

“For Moore, climate and the environment have always taken a backseat to issues like religious expression,” Tammy Monistere Herington, executive director of Conservation Alabama, told HuffPost.

Moore, in a 2009 op-ed for the right-wing site WorldNetDaily, did refute the 97 percent of peer-reviewed scientists who say greenhouse gas emissions from burning fossil fuels, industrialized farming and deforestation are warming the planet and changing the climate. Moore argued against the Obama administration’s support for a bill that would have created a national cap-and-trade program to limit carbon emissions.

“Not only is there no constitutional authority for Congress to regulate carbon emissions, but the premise of ‘global warming’ and ‘climate change’ upon which such environmental theories are based does not have the support of a scientific consensus,” Moore wrote.

“Not only do scientists disagree on ‘global warming,’ but there is little hard evidence that carbon emissions cause changes to the global climate. But it appears that Obama and his liberal administration are not really interested in what the Constitution or the scientific community have to say when it interferes with their radical agenda.”

In fact, 97 percent of peer-reviewed scientists have found that climate change is a serious threat and is at least exacerbated by humans. And there are serious flaws in the studies published by the 3 percent of scientists whose research suggests otherwise. A research review published last November found errors in the methodologies, assumptions or analyses used by in those studies that, when fixed, put the findings in line with mainstream climate scientists.

That consensus is so strong that in 2005 one of the standard-bearers of the evangelical Christian politics in which Moore enshrouds himself planned to take a stance affirming the science. That year, the National Association of Evangelicals proposed adopting a new platform called “For the Health of a Nation.” The position paper called for protecting God’s creation and embracing the government’s help in doing so. But after receiving unanimous support by the board, the 30-million-member organization voted down the proposal, kickstarting a campaign by fossil fuel interests to transform the doubt over global warming into what Splinter, in a lengthy report published in August, succinctly described as “the word of God.”

This is a demographic Moore, who attends the Gallant First Baptist Church near his home, seems likely to tap. Alabama has the highest percentage of Baptists after Tennessee, with 31 percent of residents in the state, according to Pew’s 2014 Religious Landscape study. In December, The Baptist Press, the official media arm of the Southern Baptist Convention, published an open letter of support for Environmental Protection Agency chief Scott Pruitt’s nomination amid fierce backlash over the former Oklahoma attorney general’s rejection of the scientific consensus on climate change.

“We believe that Attorney General Pruitt has been misrepresented as denying ‘settled science,’ when he has actually called for a continuing debate,” the letter wrote.

On one side of that debate is a theological argument that’s gained prominence in some corners of evangelical Christianity over the past decade. According to that interpretation, God provided fossil fuels for humans to exploit, and Christian environmentalists who believed in shifting to renewable energy were deceived by the “false doctrine” of the so-called “Green Dragon,” a demonic force that fooled people into putting the needs of the planet ahead of those of the poor.

“As a Christian, I have a responsibility to try my best to be as wealthy as possible,” James Wanliss, an associate professor of physics at Presbyterian College in South Carolina and the author of The Green Dragon: Is Global Warming a Religion?, told HuffPost. “If you’re grindingly poor, you’re just going to care about your next meal, and too bad if trees get in your way.”

He noted that industrial projects of the former Soviet Union and Communist China “resulted in massive, massive environmental destruction and death.”

“I see that some of the anthropogenic global warming rhetoric has been picked up by people who are really excited about trying to experiment with those types of systems in the West as a solution to those problems,” Wanliss said. “As a Christian, that’s a problem to me, because, well, aside from the philosophy behind those systems, it’s just, again, empirically been disastrous.”

Seeking the divine providence to burn fossil fuels is certainly part of where Moore comes from.

In 2014, Alabama public officials invoked God in the fight for fossil fuels, asking constituents to pray for the future of coal-fired plants. Public Service Commission President Twinkle Andress Cavanaugh earlier that week had kicked off a public meeting with a prayer for God to intervene against same-sex marriage and reproductive rights.

“Roy Moore, he’s part of that culture,” Michael Hansen, executive director of the Birmingham-based environmental group Gasp and a former candidate in the Democratic primary for Senate, told HuffPost. “Something that I hear quite a bit from the right wing in Alabama is that God gave us fossil fuels for a reason. I wouldn’t be surprised if Roy Moore said that at some point during his campaign.”

Alabama emerged in June from more than a year of “the worst drought in memory,” affecting 98 percent of the state. The state braced twice in the past month for damage from the devastating series of hurricanes that struck neighboring states, but it was spared the destruction after the winds weakened. Yet nearly 37 percent of Alabamians don’t believe global warming is happening, 7 percentage points below the national average, according to survey data from the Yale Program on Climate Change Communication.

Moore said in 2009 that policies to address climate change risked jobs, yet the opposite appears to be true in Alabama. The state had just 530 jobs in the solar industry last year, compared to 3,624 in Georgia and 8,260 in Florida, data from the Solar Foundation show.

“We lag behind terribly in terms of renewables, even compared to other Southern states,” Hansen said. “They’re outpacing us in solar jobs. We’re dragging our feet, per usual.”