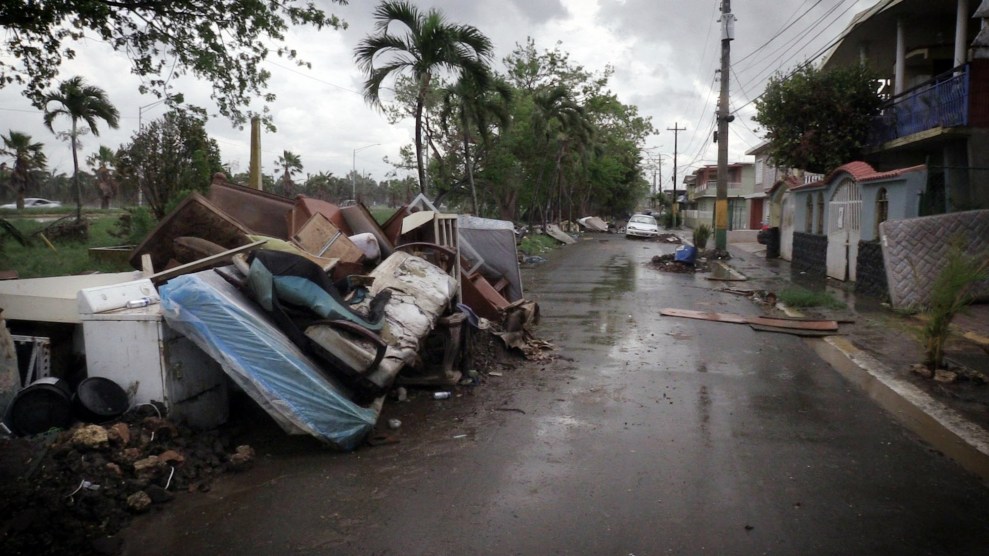 Debris left over from Hurricane Maria litter a street in Toa Baja Puerto Rico in October.Jose A. Iglesias/TNS via ZUMA Wire

After Hurricane Maria devastated Puerto Rico, we wanted to hear from you: What did you want to know about the crisis on the island? Well, we’ve gathered some of the more frequently asked questions and answered them here. We’ll keep updating this post as we learn more.

The official current death toll is 48, but it’s likely to climb even further. The truth is that the government isn’t quite sure how many people have died and is still trying to figure out how to account for deaths that occurred as a direct result of the storm (say, by drowning in a flood) versus those who’ve died after the storm (because the lack of electricity exacerbated a pre-existing medical condition, for instance.)

Reporters at Vox crosschecked news reports in both English and Spanish and counted a total of 81 deaths linked directly or indirectly to Maria. They also found another 450 reported deaths following the storm, though the causes of most of those deaths are still unknown.

What are some of the conditions in Puerto Rico, currently? How many people have access to electricity or safe drinking water?

As of October 19, nearly 80 percent of Puerto Rico’s 3.4 million residents still don’t have access to electricity, and almost 30 percent don’t have access to safe drinking water, according to status.pr. Safe drinking water is so scarce that Puerto Ricans have been forced to drink contaminated water. In Dorado, a town off the north coast, Puerto Rico’s water authority unknowingly distributed water from an EPA-designated Superfund site.

Puerto Rico Gov.Ricardo Rosselló hopes to restore 95 percent of power on the island by December, but in some rural areas, this process could take even longer. People living in the central mountains don’t expect to have power back for at least a year.

About 60 percent of residents now have cell service, although service is spotty and drops frequently in San Juan and can still be very hard to come by everywhere else.

What is the status of hospitals in Puerto Rico? Do all of them have power?

Seventy hospitals are currently open, and 45 are working with electricity, according to status.pr.

Eleven medical teams from the Department of Health and Human Services are also stationed throughout the island in order to support medical facilities, shelters, and field medical stations.

But, as with everything in Puerto Rico right now, the claims of the government must be checked against available information on the ground. When it comes to hospitals, there is some indication that those that are “operational” by the government’s standards may have their doors open and serve patients, but are nonetheless operating in a state of “chaos,” as reported by the Centro de Periodismo Investigativo (Center for Investigative Reporting). In some cases, according to CPI, “operational” hospitals could not admit critical patients. In other cases, those hospitals are being powered by generators that have, at times, failed, plunging the hospital back into darkness. One hospital mentioned in the CPI story was “performing emergency surgeries with portable air conditioners in two operating rooms.”

What are the conditions in remote areas and towns outside San Juan?

While we don’t know the condition of every town, our reporter, AJ Vicens, traveled to and reported from small towns outside of San Juan. You can read his dispatches from Ciales, Toa Baja, Cabo Rojo, Guayama, and Las Marias.

Local mayors have told Mother Jones that getting relief supplies has been difficult, especially due to the lack of reliable communications with more senior government officials in San Juan. In the first couple of weeks after the storm, many mayors and other town leaders from remote areas had to travel to San Juan in person to ask for supplies, a trip that could take hours each way in good conditions. Early on, filling a car with a tank of gasoline could be a tricky prospect; many people had to wait hours on end in long lines for fuel. Government officials could often bypass the lines, but sometimes there wasn’t enough fuel to get to every gas station, and the officials would have to wait for the next shipment, just like everyone else. As of October 18, the government reports that 873 of the island’s 1,110 gas stations are open, but that doesn’t mean they’re operating at full capacity.

The smaller towns, especially those in the mountains, have also had to wait longer for drinking water than many parts of San Juan. Many towns rely on pumping stations to deliver the water, but with the electricity out and generators in short supply, getting the water to people’s homes has been a challenge. That is improving day by day but still lags behind the situation in San Juan.

Why has disaster relief taken so long?

Sending aid to Puerto Rico can be more complicated. As we’ve reported before, because Puerto Rico is 1,000 miles from the mainland, there are greater logistical challenges to sending supplies. The Jones Act, which requires that all goods traveling between US ports be carried on US ships with an American crew, also may have caused some delays. President Trump waived the Jones Act requirements on September 28.

Getting supplies to Puerto Rico isn’t the only problem. Distributing them on the island itself has proven to be a challenge. Gov. Rosselló blamed a lack of communication between local officials and residents for the delay in relief efforts. He says the government has been delivering supplies throughout the island but that many residents aren’t aware of the deliveries.

In some towns, residents said they simply hadn’t seen any help. When AJ visited Toa Baja, residents told him no one from the government had arrived to survey the damage. In fact, government officials actually made things worse by ordering floodgates to open before Maria hit. Local officials have said that inconsistent communications with the territorial and federal governments have prevented the smooth delivery of relief supplies outside of San Juan, delaying the process. A lack of diesel fuel early on also contributed to delays because large trucks carrying supplies could not make their way around the island.

How much aid has been allocated to Puerto Rico so far?

Roselló estimates that Hurricane Maria has led to around $95 billion in damages. He requested more than $4 billion in federal relief aid from Congress on October 9.

FEMA has so far disbursed about $336 million in public assistance grants to communities in Puerto Rico so far. It has approved about $88 million in assistance for individuals. Additionally, FEMA says that it will be providing 20 million meals and more than 11 million liters of water to the island.

Trump announced on Thursday that he would work with Congress to provide more aid for Puerto Rico, though he did not specify how much money would be given to the island. Congress had earlier approved a $36.5 billion relief package, of which $4.9 billion would go to hurricane-affected areas such as Puerto Rico.

What is FEMA’s approach to rebuilding Puerto Rico?

FEMA says that it is working to support the priorities set by the governor, which include restoring power, ensuring that Puerto Ricans have access to safe drinking water, providing support for medical facilities, and restoring communications and cell phone service on the island.

A FEMA spokesperson says that “although it will be some time before communities truly recover, more services and resources are becoming available that allow residents to begin resuming daily routines.” However, Trump tweeted on Oct. 12 that FEMA and the military could not stay in the island “forever.” When asked about this statement, FEMA declined to comment, instead referring Mother Jones to the White House press operation.

How are people getting food? What do grocery stores look like?

According to status.pr, almost 88 percent of grocery stores are open. However, it’s unclear what kinds of goods many of those stores are offering, or if any fresh food is available. As we noted in one story, there’s not much food on the shelves, and residents end up having to buy meals at restaurants that have been able to restore power. Even if residents can purchase food, they generally don’t have the electricity to refrigerate it.

AJ also visited a grocery story in the town of Guayama that had been completely destroyed by the hurricane. Its roof was ripped off; cakes were molding in refrigerators. Residents of the town didn’t have enough food and water. “We’re living day by day,” one resident said.

What is the best way to help?

Beatriz Rosselló, the first lady of Puerto Rico, established a charity fund called United for Puerto Rico to coordinate donations and relief efforts, and it accepts donations here. There are also a variety of groups accepting donations in Puerto Rico, some large, some small (see a partial list here). As with any charitable donation, do your research to determine which organizations are worthy of your money.

In addition to money, there’s a more fundamental thing people can do to help Puerto Rico, at least according to one woman AJ talked to in San Juan the day Trump visited the island. “Of course we need help, but money is not the best answer,” Zorahya Díaz, 36, said when he asked her what she would say to those stateside who were asking what they could do. “Speak out about our reality.”

As important as monetary aid and food donations are in the immediate futre, Díaz argues that the best hope for Puerto Ricans in the long term is for more people to understand the political realities and issues facing the island’s 3.4 million residents. From the lack of full funding for Medicaid, to the ongoing debt crisis, to the lack of full representation for Puerto Ricans in Congress—let alone their inability to vote in presidential elections, despite their full citizenship status—there are a lot of problems in Puerto Rico that need significant attention and work. Perhaps, Díaz said, the devastation wrought by Hurricane Maria, and the attention that focused on the island in the weeks that followed, will finally push some of these problems into the national spotlight.