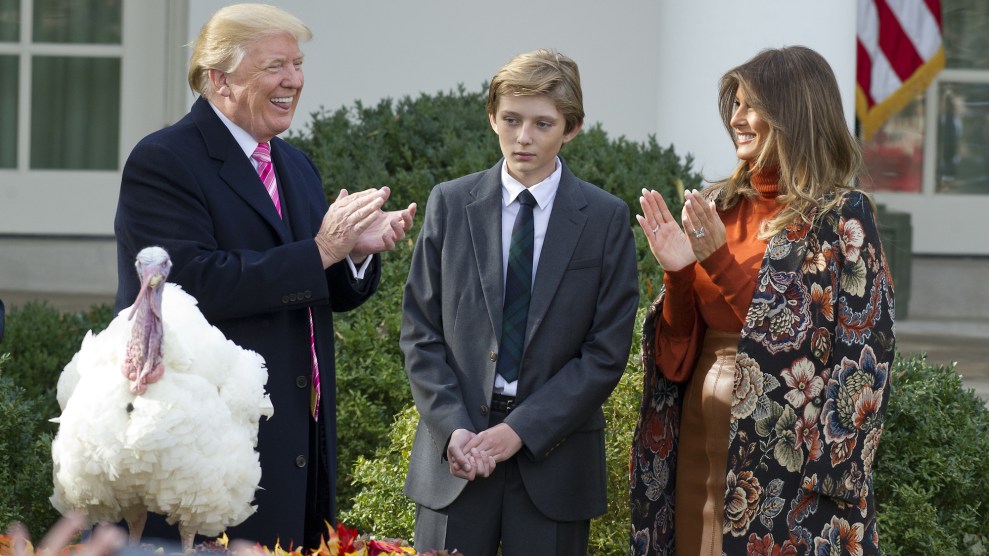 In keeping with a longstanding pre-Thanksgiving presidential tradition, President Trump on Tuesday spared the lives of two turkeys—Wishbone and Drumstick. “I have been very active in overturning a number of executive actions by my predecessor,” he said. “However, I have been informed by the White House Counsel’s Office that Tater and Tot’s [Obama-era] pardons cannot under any circumstances be revoked.”

The National Turkey Federation, a D.C. trade group that represents poultry industry interests, supplied the White House with the two lucky turkeys, and with the Trump administration’s reversal and delay of many Environmental Protection Agency clean water, air, and chemical regulations, poultry interests have much to be grateful for. In Scott Pruitt, they have a sympathetic EPA administrator who has taken multiple meetings with the industry in his first year—and delivered on their key issues.

Turkey industrial farming, and the livestock and poultry industry more broadly, cause an array of environmental problems. Their over-reliance on antibiotics have contributed to a rise in antibiotic resistance. Add to that, their massive waste: A single concentrated animal feeding operation with 1,000 “animal units of turkeys produces a waste load comparable to a city of 87,700 people,” according to a 2004 EPA report. Waste from these factory farms contribute to bad air and water quality.

Turkeys even contribute to climate change. The greenhouse footprint from poultry is less than that of beef—a big methane offender—but poultry meat and eggs still account for around 8 percent of the global livestock greenhouse gas emissions, says a 2013 United Nations study. (Generally, there’s less study of poultry’s impacts on global warming than beef, but chicken is one of the most carbon-intensive foods based on per-capita consumption, according to a 2017 Natural Resources Defense Council report).

Just in case the administration needed some guidance on what’s highest on the poultry industry’s wish list, earlier this year, the National Turkey Federation, the National Chicken Council, and US Poultry and Egg Association, submitted comments to the EPA on how to reduce the agency’s “regulatory burden.” For example, they suggested the EPA reverse the 2015 Waters of the US Rule (WOTUS), which redefined what waters fell under the Clean Water Act’s jurisdiction and would have led to further restrictions on industry water pollution. “If the EPA feels a rule defining ‘Waters of the United States’ is necessary, we recommend starting over,” they argue. Starting over would certainly set the rule indefinitely, since any rulemaking requires years of drafting, feedback, and study—which WOTUS already went through the first time around.

And Pruitt has delivered. His EPA has proposed a full repeal of WOTUS, which he heralded on “state action tours” that largely featured the ag industry. In July, for example, he appeared at a Poultry Federation roundtable in Arkansas.

And finally, they asked the EPA to continue exempting livestock and poultry from reporting their impact on air quality. In the past, the EPA exempted most farms from reporting emissions coming from poultry waste. But in 2017, the District of Columbia Court of Appeals threw out the exemption, so the EPA would need to develop new guidance to begin collecting this data. The letter from the National Turkey Federation suggests that the EPA create a new rule “that relieves farms from the burden caused by their obligation to file these ineffective reports.” The EPA, which has issued preliminary guidance for reporting requirements, is still asking the court to delay the mandate. The National Pork Producers Council and the U.S. Poultry and Egg Association filed a brief supporting the EPA’s motion.

In July, EPA administrator Pruitt spoke to the National Turkey Federation’s Annual Leadership Conference in D.C., and he met with agriculture interests multiple times when his tenure began. Even before joining the EPA, Pruitt was an ally of big poultry interests in his home state of Oklahoma. As attorney general he received donations from nearly 30 poultry executives, the New York Times reported, and settled with the poultry industry over dumping 300,000 tons of animal waste a year in the Illinois River rather than continue with a lawsuit in federal court that his predecessor had initiated.

So while you’re eating the turkey Trump hasn’t pardoned, you might consider how his EPA pick has delivered on the promise he reportedly gave the American Farm Federation in a meeting early in his EPA tenure. The Trump administration, Pruitt said, “is looking forward to working closely with the agricultural community.”