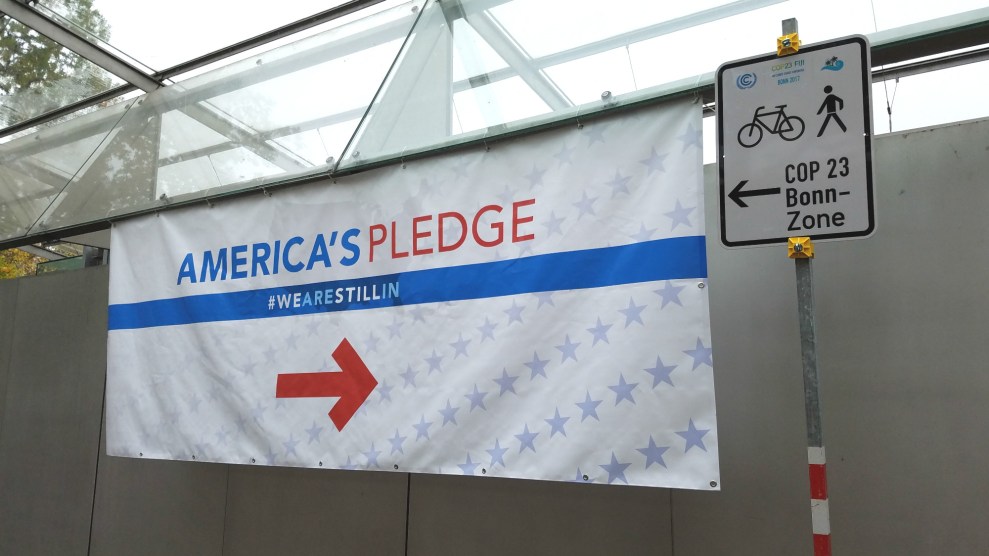 That, more or less, is the extent of the United States government’s public presence at the 23rd United Nations climate change conference, hosted this year in Bonn, Germany.

During the Obama years, the US dispatched scores of delegates to Copenhagen, Marrakech, Doha, and Lima for climate negotiations. They represented the country’s federal agencies, top diplomats, and scientific experts, while playing central roles in crafting an international accord to combat the effects of climate change and lower global emissions. Cabinet secretaries gave high-profile speeches at these gatherings. And in 2015, President Obama flew to Paris to help close the deal on what came to be known as the Paris Agreement—a framework signed by 197 countries for halting the increase in global warming to 2 degrees Celsius.

The goal of the this year’s UN conference in Bonn, which began on Nov. 6 and runs until Friday, is more wonky. Delegates are starting to hash out the specifics of the Paris Agreement and determining the specific steps countries must take to put that historic deal into motion and begin to lower global temperatures. President Trump, of course, announced his opposition to the Paris Agreement in June, leaving the US isolated on the global stage. Spend a few minutes walking the conference grounds or speaking with delegates from other countries, and the absence of a strong US government presence here in Bonn is glaringly obvious.

In a break with past tradition, there is no US pavilion. The only official White House event was a Monday panel on “cleaner and more efficient fossil fuels and nuclear power in climate mitigation” that featured representatives from the Trump administration and the coal and nuclear industries. Over three days at the conference, the sole physical proof I could find that US government officials showed up was a nondescript door leading to the delegation’s small office. Taped to the door was a print-out of an American flag with the words “AUTHORIZED PERSONNEL ONLY.” Another sheet of paper listed a generic State Department email address for media inquiries with a pledge to “answer your questions promptly.” I sent an email on Sunday morning and got no response. When I visited again on Monday, a US representative stepped out of the office, noticed a group of journalists (me included), and ducked back inside. Behind closed doors members of the US delegation are involved in various negotiations underway here, but they’re loath to talk about it: When I caught up with a different US representative, she was polite but insistent in refusing to speak to me, telling me to send another email. I did. Again, no response.

Sad as it is, the pathetic official US footprint at the world’s most important climate conference comes as no surprise. President Trump has come out against the Paris Agreement, which makes the US the only nation in the world to oppose the deal. (Syria, the final hold-out, announced it would sign the agreement at the start of the Bonn conference.) Trump can’t officially pull the US out of the Paris Agreement until November 5, 2020, the day after the next presidential election, but his opposition to the accord and the climate-change deniers that stock the ranks of his administration have cast a pall over this year’s proceedings in Bonn. “To the extent the US delegation is doing anything,” an island-nation representative who has attended numerous UN conferences told me, “it’s trying to slow things down and grind down the proceedings.”

“To the extent the US delegation is doing anything, it’s trying to slow things down and grind down the proceedings.”

But that is only the official part of the story. A short distance beyond the UN convention facility, there is a series of white inflatable domes ringed by fences adorned with American flags. This is the place where the resistance—call it the alt-US—has asserted its unofficial but undeniable presence at the climate conference.

The domes comprise the US Climate Action Center, the site of the several days’ worth of speeches and events featuring Democratic politicians—Governors Jerry Brown and Terry McAuliffe—a handful of US senators, and other state and local leaders of both parties seeking to reaffirm their home country’s commitment to the fight against climate change. There’s barely a flat surface inside the pavilion not tagged with #WeAreStillIn, the rallying cry of choice for the anti-Trump, pro-science movement. The vibe inside the alt-US bubble—and it is a bubble—is 2001: A Space Odyssey meets Davos. Junior staffers walk around giving away free copies of Mike Bloomberg’s latest book, and attendees drink free lattes courtesy of the pavilion’s many underwriters, which include Bloomberg Philanthropies, the left-of-center Center for American Progress, the World Wildlife Fund, and many others.

The alt-US compound and its supporters, however, are not perceived as the de facto US delegation by the rest of those at the conference. No one working at the official UN conference itself can tell you where the unofficial US pavilion is. I spent a maddening hour of my first day in Bonn lost in a labyrinth of energy-efficient-LED-lit hallways as I searched for the alt-US pavilion. I passed through security at least nine times as I entered and exited the conference hall, acquiring in the process a passing fluency in Fijian from all the promotional posters—Bula vinaka! Nice to meet you!—that adorned the walls. (Fiji is the presiding nation for this year’s conference.) It wasn’t until I stopped a gaggle of young American activists and asked for directions—they’d had trouble finding it as well—that I found my destination.

On Monday morning, four Democratic governors and Arnold Schwarzenegger, the former Republican governor of California, described their efforts to carry through on their climate-change targets despite the climate denialism coming out of Washington. “Donald Trump cannot stop the things that we are doing to fight climate change and create a clean energy economy,” Washington State Gov. Jay Inslee said. He went on to describe all the efforts that are taking place despite the leadership—or lack thereof—in Washington: Inslee’s own executive order limiting carbon pollution; electric vehicle incentives in California; offshore wind farms developed by Virginia Gov. Terry McAuliffe; and Oregon’s cap-and-trade system.

The message pushed by the US governors and senators and activists is one of exuberant defiance, sometimes overly so, matching Trump’s daily dose of bombast with bombast of their own. On Saturday, the America’s Pledge event, a gathering headlined by Gov. Brown and former New York Mayor Mike Bloomberg, drew a raucous, standing-room-only crowd. Brown and Bloomberg rolled out a new report that outlines how states, cities, and other “sub-national actors”—the clunky term of choice for anything that’s not a country—are helping the US meet its targets under the Paris Agreement. “It is important for the world to know the American government may have pulled out of the Paris Agreement, but the American people are committed to its goals and there is nothing Washington can do to stop it,” Bloomberg said.

“The fundamental message of Bonn that we have come to deliver,” Inslee said, “is that Donald Trump cannot stop us.”