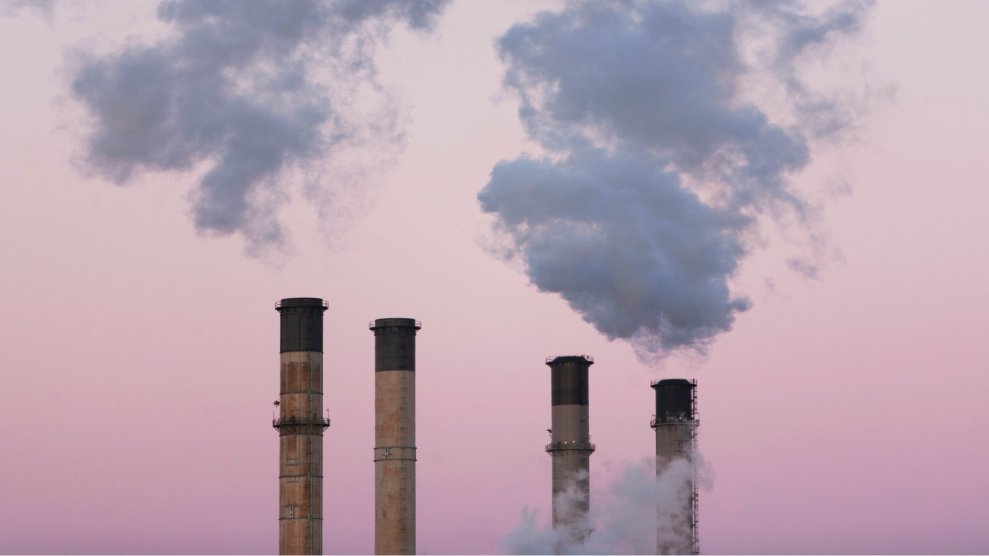 There’s a vast conspiracy afoot to decimate American manufacturing. Wealthy environmentalists and greedy attorneys are trying to stuff their already-fat pockets by suing defenseless companies over their contributions to global warming. They allege that energy manufacturers create a “public nuisance” by emitting greenhouse gases and are liable for the damages this causes. Worse, they disguise themselves as do-gooders: They represent plaintiffs like Alaska Native American tribes who are losing their frozen land to warming temperatures, and communities impacted by sea-level rise. But these con artists aren’t really trying to save the planet. They’re trying to put American companies out of business.

That’s the core message of a new trade group quietly formed last month by the National Association of Manufacturers, the largest industry trade group of its kind and a powerful lobbying force in Washington.

Let’s expose this coordinated campaign, which jeopardizes the ability of all manufacturers to continue growing & providing jobs to millions of Americans

Did you know there's a coordinated network of special interests waging a campaign to disparage manufacturers in the US?

The Manufacturers’ Accountability Project was formed to “highlight the concerted, coordinated efforts made by trial lawyers, public officials, deep-pocketed foundations and other activists” to undermine manufacturing—but with a specific focus on lawsuits that seek to hold corporations financially responsible for their role in the climate crisis. No other trade association has ever undertaken such an effort. “We are the first group out there,” a spokesperson told the Washington Examiner.

MAP is a novel effort because climate liability cases are, too. In the last year, an increasing number of plaintiffs and attorneys general have attempted to use the courts to punish big polluters, seeking punitive damages or other penalties against companies that contribute to climate change. And we know who those companies are: Earlier this year, a peer-reviewed study asserted that just 90 companies were responsible for as much as 50 percent of the increase in global temperature and 32 percent of sea level rise since 1880. The study also said investor-owned companies like BP, Chevron, ConocoPhillips, and ExxonMobil have caused 16 percent of the global average temperature increases and 11 percent of global sea level rise.

But are climate liability lawsuits and investigations an effective strategy for fighting climate change? That’s up for debate, since few cases have been successful. But the fact that the National Association of Manufacturers is taking up arms against this strategy suggests that they see a legitimate threat. With multiple cases pending, 2018 may be the year that corporate polluters are finally held responsible for what they’ve done to the planet.

Climate-related court cases have skyrocketed in the last three years. A May study by the United Nations and Columbia University found that the number of lawsuits filed across the world has tripled since 2014; out of nearly 900 cases, 654 were filed in the United States. Most of these suits seek to punish governments, not corporations, for not taking sufficient action to fight climate change—usually by arguing that public officials have denied citizens’ rights to a clean and healthy environment.

Some of these lawsuits have succeeded in other countries. In 2015, the Dutch government was forced to lower the country’s greenhouse gas emissions in response to a class action lawsuit from its citizens. A judge in Ireland recently ruled that citizens have a constitutional right to a safe climate and environment. And last month, a climate liability lawsuit against Germany’s largest power company was allowed to move forward. “Judicial decisions around the world show that many courts have the authority, and the willingness, to hold governments to account for climate change,” said Michael Burger, executive director of Columbia’s Sabin Center for Climate Change Law. He cited a 2007 lawsuit that forced the U.S. Environmental Protection Agency to regulate greenhouse gas emissions. “Similar litigation all over the world will continue to push governments and corporations to address the most pressing environmental challenge of our times.”

The success of Massachusetts v. Environmental Protection Agency keeps corporate attorneys up at night. In that case, the Supreme Court ruled that greenhouse gases are an air pollutant that cause harm, a legal precedent that is “being used as the support for climate-change-related lawsuits against companies,” reads a recent report from the corporate law firm Anderson Kill. That report warns of a “coming flood” of tort lawsuits that allege corporations are liable for climate change–related damages, as well as shareholder lawsuits that allege public companies aren’t doing enough to warn investors about the financial risks of climate change and climate lawsuits. “Although we have yet to see any significant number of governmental actions or shareholder suits against corporations or their [executives] in relation to climate-change-related disclosure failures,” the report reads, “the seeds for the future growth of such actions are being sown.”

The Manufacturers’ Accountability Project recognizes this, and focuses on the cases that have the biggest chance of succeeding in 2018. New York Attorney General Eric Schneiderman is investigating whether Exxon Mobil intentionally misled shareholders about the impact of climate change on company profits, thereby committing securities fraud. Court filings from Schneiderman’s office in June statedthat “evidence suggests not only that Exxon’s public statements about its risk management practices were false and misleading, but also that Exxon may still be in the midst of perpetrating an ongoing fraudulent scheme on investors and the public.” MAP’s website calls the investigation “politically motivated” and alleges, without evidence, a “web of collaboration” between Schneiderman and “anti-manufacturing advocates.” (Exxon has sued to block the Schneiderman’s investigation, though without success thus far, and still no charges have been filed.)

MAP’s site also sharply criticizes Matt Pawa, an attorney who, according to a 2010 profile by InsideClimate News, has been “working tirelessly to establish global warming as a ‘public nuisance’ under tort law, holding corporations accountable for their greenhouse gas pollution and forcing them to face their victims in court.” (MAP also targets InsideClimate over its Pulitzer Prize-nominated investigation into Exxon.) Pawa’s most recent cases are in California, where he’s representing the cities of San Francisco and Oakland in suits against ExxonMobil, BP, Chevron, ConocoPhillips, and Shell. The lawsuits are trying to make the oil giants pay for seawalls and other structures “to protect about $49 billion in public and private property sitting within six feet of the current sea level,” according to Climate Liability News. Both cities are extremely at risk from sea level rise.

MAP attacks Pawa for partnering “with wealthy donors, activists and other profit-seeking plaintiffs lawyers to attack the energy industry,” adding, “He knows he will be handsomely compensated at many points on his legal marathon.” Reached by phone, Pawa laughed for approximately 30 seconds, then declined to comment on the accusations. He did, however, speculate why his cases were targeted by the group. “Maybe it’s a sign that these lawsuits are considered to have merit,” he said. “And so they’re concerned.”

Cases like Pawa’s have many hurdles. For instance, as a MAP spokesperson rightly pointed out to the Washington Examiner, the Supreme Court ruled unanimously in 2011 that corporations can’t be sued for greenhouse gas emissions under federal law because the EPA already has rules to regulate those emissions. But Pawa’s California cases, for example, are based on state law instead of federal law, and use a legal strategy that’s already been successful in one California case against a lead paint manufacturer: arguing that the companies create a “public nuisance,” a centuries-old legal doctrine that is broader in California than in most other states.

There are also limitations to how impactful these lawsuits can be. As Ketan Jha argues at Slate, litigation “is typically an inefficient method of achieving policy reform.” The lead paint case that Pawa is replicating is still in court 17 years after it was brought, because of appeals. And while punishing companies for damage they’ve already done to the planet may feel satisfying, it does little to reverse the problem. But climate lawsuits and investigations don’t have to save the world to be worthwhile. In fact, they don’t even necessarily have to end in victory to make an impact. The world’s polluters see what’s happening to Exxon, and they just might clean up their act to avoid the same fate.