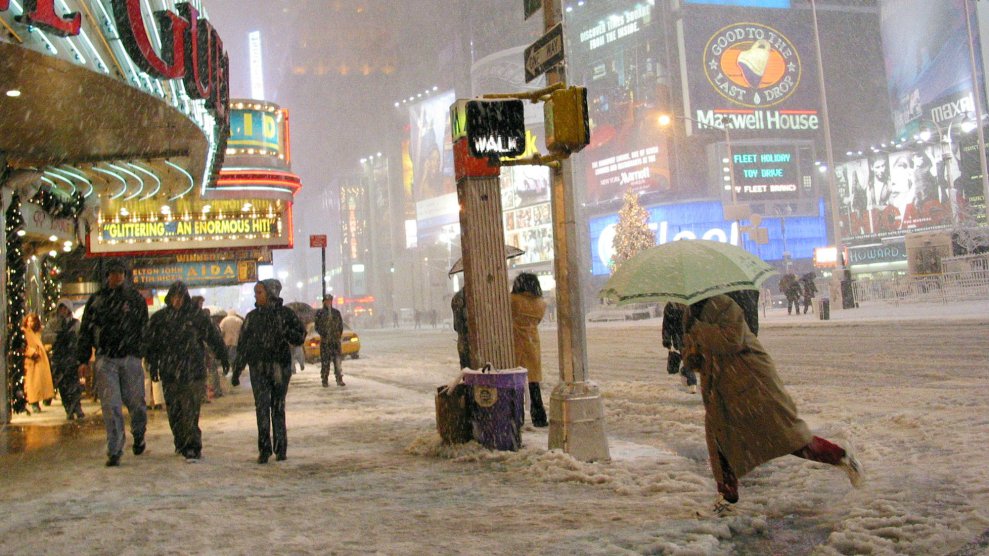 Snow can turn Christmastime into the magical, winter holiday you might be hoping for. But so far this week, it appears much of the country will miss a white Christmas—though some storms are in store for the weekend.

But a look at past blizzards in the U.S. reveals how people have experienced intense snowfall that halted cities and airports, buried cars and even caused 34-foot waves on coastlines. Many of these historic storms arrived just in time for the holidays. These are just a few memorable Christmas snowstorms:

The winter of 1969 saw tons of snow in the Northeast. By the 22nd, a foot of snow had already fallen, but another storm system was moving along the East coast on Christmas night. Another 15 inches fell near Albany, New York, and up to 44 inches buried parts of Vermont. Some streets weren’t cleared for three to four weeks in Albany, according to the weather service. That month still remains Albany’s snowiest month on record—in addition, the same month saw a record-low temperature of 22 degrees below zero Fahrenheit.

Another Christmas Eve snowstorm dumped nearly 24 inches of snow in Denver, Colorado, according to the Denver Post. Streets were lined with snow-buried cars. Thousands were stranded at the Stapleton International Airport on Christmas night. The 1982 blizzard holds Denver’s record for most snow ever recorded on the ground—though a more recent snowstorm in 2007 holds the record for greatest snowfall on Christmas Day, at nearly 8 inches.

North Carolina’s coastline saw a massive snowstorm back in 1989. The offshore storm system blasted 60 mile-per-hour winds and 34-foot-high waves in the near-shore waters, according to the weather service. Snowfall totals were around 15 inches in Wilmington and temperatures plummeted to zero degrees on Christmas morning. Wind gusts piled snow four to eight feet high along the coast. Jacksonville, Florida reached 5 degrees below zero. It was the first white Christmas on record for northeastern Florida to North Carolina—and traffic accidents on icy roads caused several fatalities.

The “Great Christmas Eve Snow Storm” of 2004 blanketed southeast Texas ranging from one to 13 inches across the region. An Arctic cold front had blasted cold air to the area, making it the perfect environment for a snowstorm. The “depth” of cold air in the atmosphere of southeast Texas is typically much shallower than it was that Christmas Eve morning, which makes freezing rain or sleet more common than snow. The record-breaking storm resulted in the first white Christmas for some Texans, according to the National Weather Service.

The “Christmas Blizzard of 2009” raged over south central Nebraska and northern Kansas for 18 to 24 hours straight—with 30- to 60-mile-per-hour winds creating frequent “white-out” conditions. Nearly 8 inches of snow was recorded at the Central Nebraska Regional Airport at Grand Island on Christmas Day—which broke the record of 3 inches of snow in 1941. Hastings, Nebraska recorded over 9 inches at a weather service office that year, breaking the previous record from 1945.

This blizzard wasn’t quite a white Christmas—but East Coasters got their share of snow the day after. Over 7,000 flights were halted, and this strange snowstorm was accompanied with thunder and lightning, according to the History Channel. Rahway, New Jersey got the most snow, 32 inches to be exact. The snow dragged New York City to a halt that year. Even the former Mayor Michael Bloomberg acknowledged the 911 emergency systems had been “overwhelmed” and took blame for the poor response, reported the New York Times. The nor’easter brought with it gusts of 60 mile-per-hour winds.