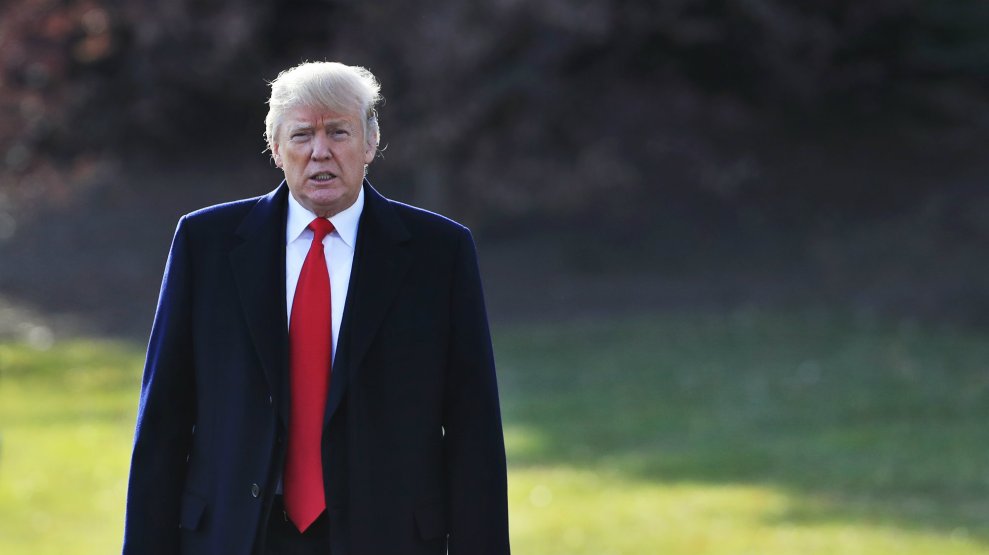 It was a tempestuous year—politically and literally.

Donald Trump’s June announcement of an exit from the Paris climate accord confirmed the fears around the world of scientists and politicians about the US’s repositioning on climate change. From Scott Pruitt’s Environmental Protection Agency, meanwhile, various air and water protections faced being razed in the name of industry first.

Protected land was also in the sights of the administration as it sought to weaken bans around industry activity, like drilling and mining in areas designated national monuments.

Then there were the hurricanes.

Irma battered the Caribbean and southern US in August, especially southern Florida, quickly followed by Hurricane Harvey, which caused some $200bn worth of damage, especially to the sprawling city of Houston.

Then in September, Hurricane Maria caused the worst natural disaster on record in Puerto Rico and Dominica; other islands were also affected.

As the year came to an end, California has faced some of the worst wildfires in its history.

Keystone XL: driving the US pipeline

Oliver Laughland and Laurence Mathieu-Léger travelled through three US states —Montana, South Dakota and Nebraska—in late April along the planned route of the controversial Keystone XL pipeline, talking to the people who live there. (In November, it was approved by Nebraska regulators—the last major regulatory hurdle—but legal challenges, and protests, are expected.)

“Our people call it the black snake because it is evil,” says Tressa Welch, as thunder clouds steamroll the blue sky over the plains of Wolf Point. “And like snakes they come out of nowhere; they slither and strike unknown.”

She faces southwards where, a couple of miles away, forks of lightning crack over theMissouri river. The 2m acre Fort Peck Indian reservation straddles this winding water source, providing sustenance for the almost 7,000 Assiniboine and Sioux tribe members here and thousands of others throughout north-east Montana. It is the river that Welch and other Native American activists on the reserve say the Keystone XL oil pipeline – or the “black snake” – will corrupt.

The river maintains the deer, the fish, the native plants, sweet grasses and sacred sage. “Anything that threatens my way of life and my spiritual wellbeing, I consider myself at war with,” she says, her two-year-old daughter by her side. “I will do whatever it takes.”

Trump is deleting climate change, one site at a time

During inauguration day on 20 January, as Donald Trump was adding “American carnage” to the presidential lexicon, the new administration also took a hammer to official recognition that climate change exists and poses a threat to the US. One of the starkest alterations to the White House’s website following Trump’s assumption of office was the scrapping of an entire section on climate change, stuffed with graphs on renewable energy growth and pictures of Barack Obama gazing at shriveling glaciers, to be replaced by a perfunctory page entitled “An America first energy plan”.

Under Obama. President Obama believes that no challenge poses a greater threat to our children, our planet, and future generations than climate change

Under Trump President Trump is committed to eliminating harmful and unnecessary policies such as the Climate Action Plan and the Waters of the U.S. rule.

The fight against climate change: four cities leading the way in the Trump era

In the aftermath of Trump’s announcement on Paris, a big story was how US cities could work round the administration to mitigate the risks from rising sea levels and temperatures. We featured four cities which, in different ways, are in the vanguard of this—New York, Miami, San Francisco and (perhaps surprisingly) Houston.

If Donald Trump advocated on behalf of water, San Francisco, the self-styled capital of “the resistance”, would likely advocate not bathing. The president received just 9% of the vote in a city in which the final elected Republican was vanquished in 2014.

And, surely enough, after the president made his Paris announcement, San Francisco’s board of supervisors on 6 June introduced a resolution stating that this city would stay the course. “I think it’s important San Francisco goes on record as a city that is committed to this agreement, regardless,” said the city supervisor London Breed, the board’s president. “We’re not going to stop doing what we do best.”

‘America’s dirty little secret’: the Texas town that has been without running water for decades

Oliver Milman, our US environment correspondent, has been leading a strand of our reporting on environmental justice—and found this extremely lacking in this town outside Dallas which has no running water.

It’s a sweltering Saturday in October and Pastor Eugene Keahey is becoming agitated. His flock live in a Texas town that hasn’t had running water in 30 years and the donated bottled water they rely upon is in short supply.

“We got six cases of water from a donor but two have already gone in the last hour,” said Keahey, eyeing the line of people waiting for their weekly handout of food and water from the Mount Zion Baptist church in Sandbranch, a largely African American community that lies 20 minutes and a world away from Dallas.

Recent hurricanes in Texas and Florida have diverted the attention of non-profits away from the sisyphean struggle endured in Sandbranch. “I’m going to have to come up with a plan, get on Facebook and beg or borrow water from somewhere,” said Keahey.

“People come for donations from outside the town and it’s difficult to say, ‘No you can’t get water because you’ve got running water at home.’ My test is to say ‘What do you do with the bottled water?’ If they just say they drink it, I have to say no because people here shower, brush their teeth with it, everything.”

Created by Bill Clinton and Barack Obama, the Cascade-Siskiyou monument protects Oregon’s extraordinary biodiversity, from butterflies to trout. But a Trump review threatens to open the landscape to the timber industry.

Dave Willis, a grizzled woodsman and backcountry outfitter, has spent decades laboring to protect the mountains of south-western Oregon, one of the most beautiful, biodiverse regions in the country.

Through grassroots activism, Willis and his conservationist allies have won the support of two US presidents. In 2000, Bill Clinton created the roughly 52,000-acre Cascade-Siskiyou national monument, proclaiming it an “ecological wonder”. Located just outside of Ashland, it was the first such monument established solely for its extraordinary species diversity. It’s a place that harbors rare lilies and endemic trout, Pacific fishers and goshawks, black bears and a stunning array of butterflies.

During his final week in office, meanwhile, Barack Obama added about 48,000 acres to the Cascade-Siskiyou monument, nearly doubling it in size.

Now, the Trump administration is threatening to undo it all.