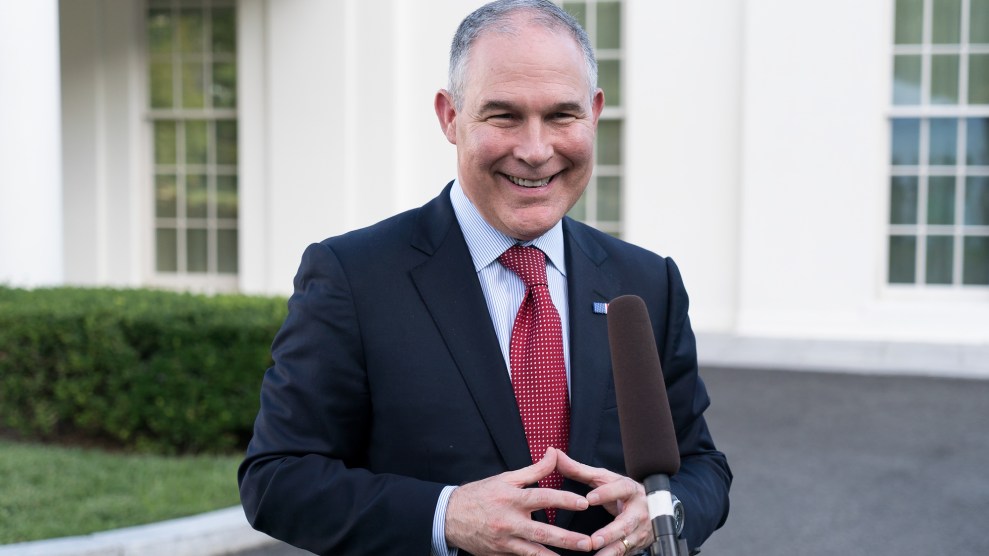 One year ago, President Trump nominated Scott Pruitt to lead the very agency he repeatedly sued when he was Oklahoma Attorney General. At his first congressional oversight hearing on Thursday, Pruitt reflected on the “very, very consequential, and, I think, exciting 10 months since I’ve been in the EPA.”

His critics would use other words—”unresponsive” and “harmful” among them—to describe Pruitt’s tenure. A central theme for Democrats during Pruitt’s first oversight hearing in the House Energy and Commerce Committee was how Pruitt has evaded oversight the past 10 months. His second oversight hearing will be in the Senate at the end of January. He appeared once before the House and Senate appropriations committees to defend Trump’s EPA budget cuts and another time for his confirmation hearing before the Senate Environment and Public Works Committee.

“The Environmental Protection Agency (EPA) under Administrator Pruitt has consistently failed to respond to Congressional oversight requests,” New Jersey’s Rep. Frank Pallone said in his opening comments. “In the few instances when we have actually received responses, they are perfunctory, at best.” Pallone also noted that the EPA has refused to respond to some basic requests for technical assistance on legislation.

The Democrats on the committee had a laundry list of concerns about the administrator’s actions: his meetings with industry; his efforts to undermine climate science; his removal of climate pages from the EPA website; EPA’s reversal of the ban of the toxic pesticides that contain chlorpyrifos, and his industry-friendly implementation of tougher toxics and chemical legislation. They asked about his attempts to make EPA science advisory boards more accepting of industry, the repeal of the Clean Power Plan and clean water rules, and the slow pace of his administration providing his public schedule.

Rep. Diane DeGette (D-Colo.) noted the committee sent Pruitt 34 letters this year, including on the removal of climate data from the EPA website and his resistance to sharing his public schedule. The EPA still hasn’t answered eight letters, some of them months old. She said her Democratic colleagues felt that the rest of the 22 letters “had incomplete responses.”

In contrast, many Republicans noted they were happy with the direction he’s taken the EPA, asking him gentler questions about his plans for Superfund sites, the coal industry, and toxic chemical regulation.

With Democrats, the exchanges tended to be more combative, especially when the questions hit on potential conflicts-of-interest.

Pressed by @USRepKCastor, Scott Pruitt refuses to recuse himself from lawsuits involving his past donors and colitigants in his 14 lawsuits against the EPA as Oklahoma’s attorney general. When she pushes back, he asks @RepShimkus to cut her off, then waits for her time to expire.

Pruitt did shed slightly more light on his plans for the Clean Power Plan and the EPA endangerment finding that climate harms human health. The finding forms the basis for much of the EPA’s work on climate change.

Pruitt told the committee that he intends to introduce a replacement rule for the climate power plant regulations he’s now in the process of repealing. It’s an important distinction, because in October Pruitt punted on the question of whether he was going to repeal the Clean Power Plan outright with no new rule, or that he planned to replace it with a much weaker rule—the option many industry interests prefer because they see it as the safer bet to survive court challenges.

He assured the committee that in January he would provide more detail on his “red team blue team” exercise, in which he intends to have climate skeptics and scientists have a “real-time” debate rehashing the already well-understood role of humans in changing the climate. The fossil fuel industry and many who deny the human contribution to global warming hope this will help undermine the endangerment finding, the brass ring for climate deniers.

Asked by Rep. Joe Barton (R-Texas) about his intentions on the endangerment finding, Pruitt hedged—just enough—describing the process as “short-shrifted” and “accelerated,” a mischaracterization of the multi-year effort—described on the EPA website—including public hearings that went into the finding. He repeated that the EPA’s use of the UN Intergovernmental Panel on Climate Change  undermines its own scientific conclusions. The Huffington Post‘s Alexander C. Kaufman has done a good fact-check on how Pruitt’s claim is a problematic dog-whistle to nationalists.

At one point, Pruitt claimed that “science is essential” to the EPA’s work and “will remain central and core to what we do,” listing air pollution, pesticides, and Superfund sites as examples. There was one notable absence on his list: climate change.