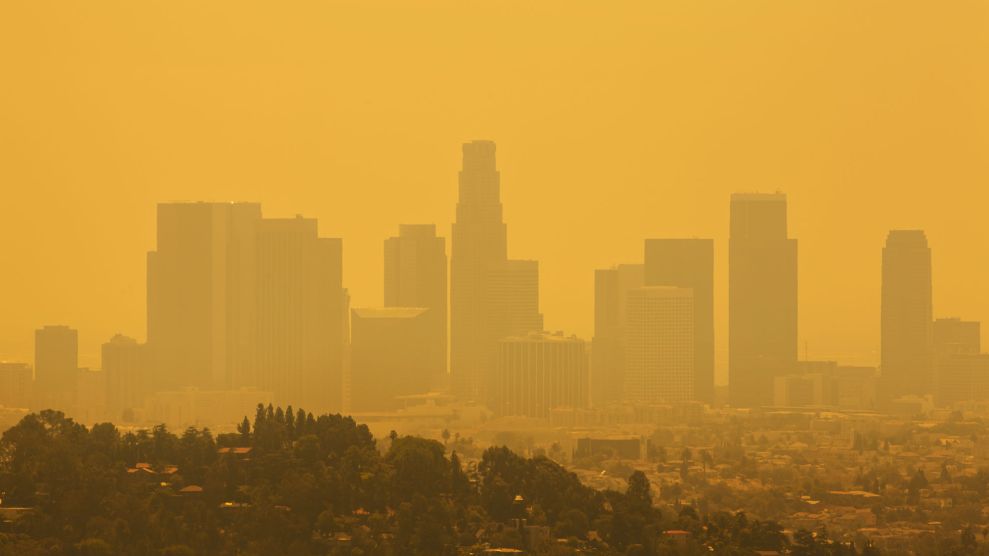 Despite its progressive environmental policies, the state of California actually has the worst air quality in the nation, according to a 2017 report from the American Lung Association. More specifically, California’s Central Valley, which produces one third of the country’s vegetables and two thirds of its fruits and nuts, is home to some particularly nasty air, thanks to its bathtub-like topography, which traps air pollution in the region. Just in the past month, the Central Valley saw, by some measures, its worst period of polluted air in nearly 20 years, which researchers have attributed primarily to smoke from wildfires that ravaged areas of Southern California, as well as the typical culprits—vehicle emissions and residential wood-burning.

All this pollution has not been good for Californians’ health. On a global scale, the World Health Organization estimates that air pollution causes one in eight premature deaths, and is associated with an increased risk of asthma (with children being particularly vulnerable), cancer, and birth defects. The state alone loses tens of billions of dollars every year in health-related costs of air pollution.

California has traditionally tried to tackle the problem by regulating and limiting vehicle emissions, among other measures. But, a new study led by researchers at the University of California-Davis found the state may be vastly underestimating a major source of air pollution: fertilizer.

According to the study, published Wednesday in the peer-reviewed journal Science Advances, California’s Air Resources Board currently estimates that just about four percent of the state’s emissions of nitrogen oxides (or NOx, a component of smog) come from agricultural soils. But the researchers note that the board’s data is based on measurements taken within 125 miles of Sacramento—meaning, they argue, that the calculations miss many of California’s agricultural hotspots and are thus seriously flawed.

By comparing computer models with NOx measurements collected by airplane over California’s Central Valley last summer, the researchers found that fertilized soils may actually be contributing up to about 40 percent of the state’s nitrogen oxides emissions, more than ten times what the state currently estimates.

“In California, it was previously assumed that most of the NOx emissions were coming from [motor vehicles], with a very small percentage coming from soils,” Maya Almaraz, a postdoctoral researcher at UC-Davis and an author on the study, tells Mother Jones. “What we found is that there is potentially a much larger source coming from soils than we previously thought—and a lot of that is coming from cropland soils.”

As the country’s agricultural powerhouse, the Central Valley isn’t shy about using fertilizer, piling hundreds of thousands of tons of nitrogen on crops each year. And much of the fertilizer which isn’t consumed by crops is eventually released into the air as nitrogen oxides and can create dense layers of smog over entire towns and cities.

Many poor communities surround the Valley and bear the brunt of smog-related health effects, including an increased rate of asthma attacks, acute bronchitis, and missed days of school and work. Fresno, for example, is home to about 970,000 residents; 240,000 of them live in poverty and 70,000 have asthma and are at risk to ozone pollution (which is formed from nitrogen oxides), according to the American Lung Association. Between 2013 and 2015, Fresno residents saw, on average, about 93 high ozone days in unhealthy ranges per year.

“We’re really worried about these rural communities that are facing this source of pollution in the Central Valley,” Ben Houlton, another author on the study and director of the John Muir Institute of the Environment at UC-Davis, tells Mother Jones. “A lot of them are really disadvantaged economically, so it’s a real environmental justice issue we need to sort through.”

As global temperatures rise, air pollution will only get worse, says Houlton. “As the climate gets hotter in California, the potential for these gasses to become more toxic increases,” he said. To combat this rise in fertilizer-sourced air pollution, the authors call on farmers to apply new technology, including slow-release fertilizers and sensors that can measure the amount of nutrients already in the soil, to improve fertilizer efficiency and subsequently limit nitrogen oxides emissions.

“We don’t want this to come across as blaming farmers. I grew up working on farms, and my family were farmers in the Midwest and I fully understand how hard they work,” said Houlton. “But at the same time, we have to become more efficient. When 50 percent of our fertilizer doesn’t make its way into the initial crop, that’s a huge efficiency challenge that needs to be solved.”