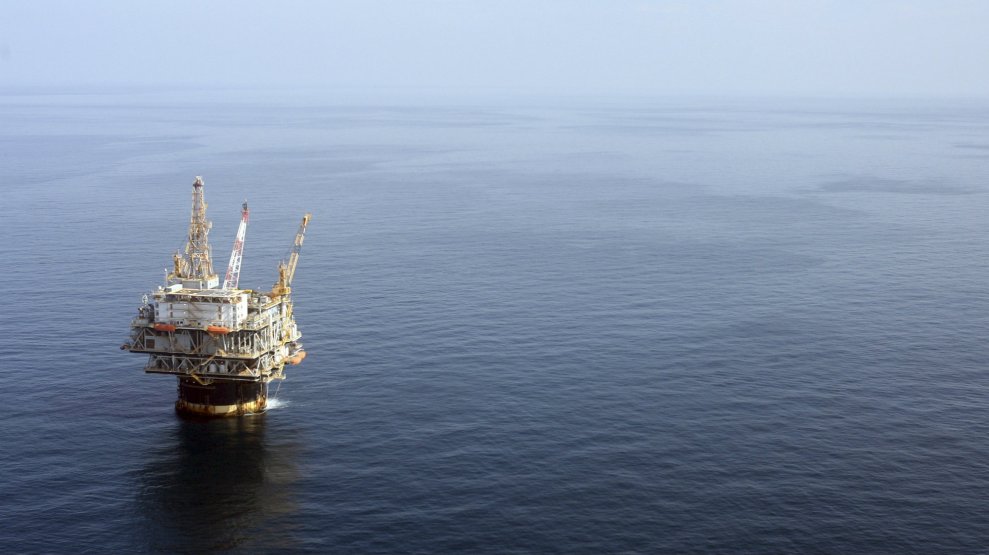 Interior Secretary Ryan Zinke has proposed a sweeping new offshore drilling plan aimed at opening huge swaths of the Arctic, Atlantic and Pacific oceans to oil exploration as part of the Trump administration’s plan to transform the United States into a fossil fuel juggernaut.

The draft plan released Thursday includes 25 of 26 offshore planning areas and makes available for lease roughly 90 percent of the U.S. Outer Continental Shelf. The administration has identified 47 potential lease sales, including 19 off the coast of Alaska and 12 in the Gulf of Mexico, Zinke told reporters Thursday.

“This is the largest number of lease sales ever proposed” for the national offshore leasing program, Zinke said.

President Donald Trump signed an executive order in April aimed at opening up the now-protected areas. The order instructed the Interior Department to review the current five-year oil and gas leasing program, finalized by the Obama administration in November, and to write new rules for offshore oil and gas drilling under the guise of an “America-First Offshore Energy Strategy.”

If approved, the plan would be in effect from 2019 to 2024. It would replace the current leasing program, which runs through 2022 and was approved following an extensive, multiyear review.
“This is a clear difference between energy weakness and energy dominance, and under President Trump, we are going to have the strongest energy policy and become the strongest energy superpower.”

Zinke stressed that the proposal is the beginning of a process that would allow for public input from states, local communities and congressional delegations. For eight years under the Obama administration, he said, “responsible energy development took a back seat to, in many cases, special interest groups.”

Zinke also dismissed environmental concerns, arguing—as he often does—that it is better to produce energy in the U.S. under reasonable regulations than to produce it overseas with none.

“It will deepen also our commitment to environmental stewardship because we do it right,” he said.

Citing environmental concerns, President Barack Obama’s Interior Department instituted a temporary ban on drilling in the Arctic’s Beaufort and Chukchi seas between 2017 and 2022, thereby limiting offshore drilling to the Gulf of Mexico and Alaska’s Cook Inlet. One month later, Obama used his executive authority to extend permanent protections for large swaths of the Arctic and Atlantic oceans. The permanent withdrawal encompasses the entire U.S. portion of the Chukchi Sea and significant portions of the Beaufort Sea. It also covers 31 canyons in the Atlantic, stretching from New England to the Chesapeake Bay.

At the time, an Obama administration official said that “no president has ever acted to reverse an indefinite withdrawal” and that the permanent ban would “stand the test of time.” Trump, however, claimed in April that his order “reverses the previous administration’s Arctic leasing ban.”

The Pacific coast has been closed to new oil and gas exploration since the disastrous 1969 oil spill off Santa Barbara, California. Many lawmakers from the Golden State are starkly opposed to new drilling.

“The people of California are simply not going to allow it to happen,” Rep. Jared Huffman (D-Calif.) told Zinke at a June 22 budget hearing. “In fact, our state wants to remove the existing oil and gas rigs in our waters. We are looking forward to the development of offshore renewable energy. And we’re not happy about backwards steps.”

Oil drilling off the Atlantic coast ended in the early 1980s. For years, however, the oil industry has lobbied to increase access to new drilling areas to complement the offshore industry in the Gulf of Mexico. The boom in places like North Dakota has allowed shale oil, an unconventional type of crude extracted from sedimentary rocks, to dominate the U.S. market.

“This is the largest number of lease sales ever proposed” for the national offshore leasing program.

Sierra Weaver, a senior attorney at the Southern Environmental Law Center, a group that led the charge to have Atlantic waters removed from the current five-year leasing plan, said the Trump administration has offered nothing that would justify going through this process again.

“The coast has spoken, whether it is at the local level or the state level,” she told HuffPost. “This is going to be the Trump administration’s first opportunity to either listen to what they say and really respect those local interests, or side with the oil industry over local residents.”

The only areas excluded from Zinke’s proposal are marine sanctuaries and the North Aleutian Basin Planning Area in Alaska—which former President George W. Bush set aside for protection with an executive order.

Zinke took only two questions from reporters before MacGregor took over. Questions directed at her were also limited, and no one asked about how the new offshore plan might impact climate or the coastal communities being threatened by rising seas.

Companies such as BP―which was responsible for the catastrophic 2010 Deepwater Horizon oil spill that devastated Gulf states with pollution― have pushed even harder this year for offshore drilling, despite its relatively higher costs compared to shale.

BP lost control of a well off the Louisiana coast seven years ago, causing the Deepwater Horizon rig to explode and dump about 4 million barrels of crude into the Gulf of Mexico. Eleven workers were killed, and several species of dolphins and sea turtles continue to die in record numbers due to the spill’s lasting effects.

Thursday’s announcement comes just days after the Interior Department moved to slash key offshore safety regulations adopted in the wake of the Deepwater Horizon disaster—the largest spill in the nation’s history. The agency’s  Bureau of Safety and Environmental Enforcement said the move seeks to “reduce certain unnecessary regulatory burdens” and is expected to save companies an estimated $288 million over 10 years.

Last month, Interior also abruptly cut off funding for the National Academies of Sciences, Engineering and Medicine to study offshore drilling in an effort to identify ways to avoid another disaster like Deepwater Horizon.

Environmental groups were quick to threaten litigation ahead of Thursday’s announcement.

“Our natural heritage is not President Trump’s to plunder, and we will fight this reckless proposal in the courts and on Capitol Hill,” Jamie Rappaport Clark, president and CEO of Defenders of Wildlife, said in a statement.

“This plan opens the floodgates to dirty and dangerous offshore drilling, threatening coastal economies that rely on clean and healthy oceans.”

In her own statement, Diane Hoskins, a campaign director at ocean conservation nonprofit Oceana, said that “giving the oil industry unfettered access to our nation’s oceans is a recipe for disaster.”

“This plan opens the floodgates to dirty and dangerous offshore drilling, threatening coastal economies that rely on clean and healthy oceans,” she said.

Trump’s plan is likely to put him at loggerheads with East Coast Republicans.

Florida Gov. Rick Scott pushed back against the administration’s proposal even before there was an official announcement.

“I have already asked to immediately meet with Secretary Zinke to discuss the concerns I have with this plan and the crucial need to remove Florida from consideration,” he said in a statement.

Fourteen House Republicans, most of whom are from Florida, signed a letter opposing Trump’s proposal in June to allow seismic testing ― repeatedly blasting an extremely loud air gun on the ocean floor to detect oil and gas reserves―on the Atlantic coast. Rep. Mark Sanford (R-S.C.) told McClatchy in November that he was trying to rally a coalition of Republicans against drilling on the East Coast.

Just hours after Trump signed his executive order in April, California lawmakers announced plans to introduce a bill to protect state waters from expanded drilling. Alaska native and environmental groups sued the administration the following month to block the offshore drilling efforts in the Arctic.

In June, the co-chairmen of the national commission on the BP oil spill warned that Trump’s order could set the stage for another catastrophe of similar scale. Former Florida Gov. Bob Graham and William K. Reilly, who led the Environmental Protection Agency under President George H. W. Bush, wrote a New York Times piece in which they criticized the order for allowing energy exploration in “environmentally sensitive” areas and threatening to get rid of safeguards put in place to protect against undersea well blowouts.

Plans to open the Arctic National Wildlife Refuge to drilling―passed last month as part of the GOP tax bill―have also been met with fierce criticism from environmentalists and former Interior Department officials who call the area “America’s Serengeti.”

This article has been updated with additional details about the draft plan, as well as with quotes from Zinke and MacGregor.