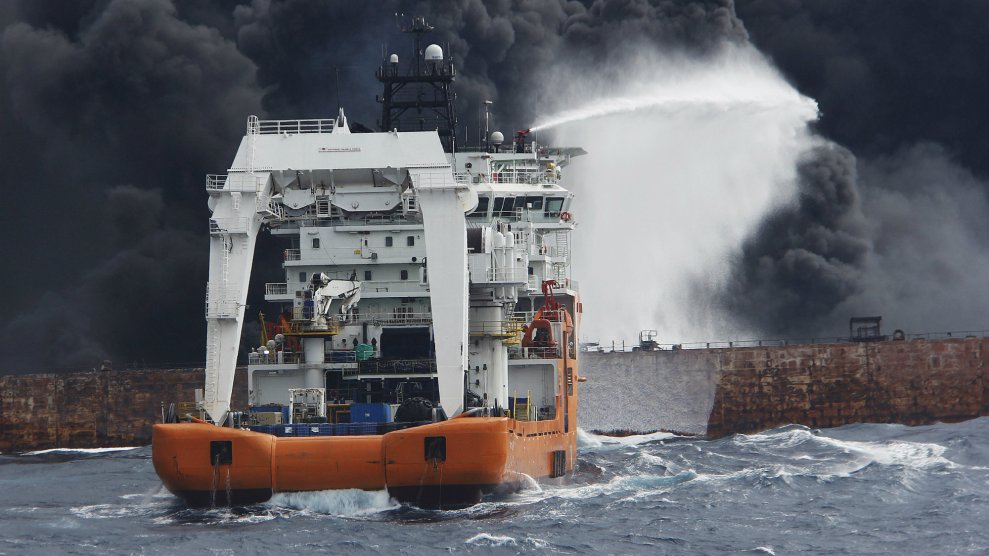 The words “oil spill” may conjure images of black globs floating in the ocean and seabirds slick with ebony-colored gunk. But not all oil spills are highly visible disasters. Last month, one of the largest tanker spills in decades involved a toxic petroleum that did not leave a dark trail. Much remains unclear about the impacts of a tragedy in the open ocean that has been largely unseen and difficult to trace.

On January 6, the massive Iranian tanker Sanchi was sailing to South Korea when it crashed into a Chinese freighter in the East China Sea. The crew of the Chinese ship was rescued, but the damaged tanker ignited, killing all 32 people on board. The Sanchi was carrying almost 1 million barrels, or about 111,000 metric tons, of a highly flammable liquid called condensate, which fed the flames as the ship burned for an entire week. It drifted south and eventually sank to the bottom of the sea in a commercial fishing area.

Much remains unanswered about the sequence of events leading to the crash. Questions have swirled about the communication systems aboard each ship. And scientists are still waiting to hear critical information about the spill. Even now, more than a month later, they are unsure about the extent of the environmental damage caused by the tanker’s condensate cargo and ship fuel.

“The one thing for certain, whether or not you can detect the impact, there’s no such thing as a good oil spill,” Paul Johnston, a scientist at Greenpeace Research Laboratories at the University of Exeter in England, said. “It’s just varying degrees of bad.”

China’s State Oceanic Administration said in a statement about a week and a half after the spill that it had collected water samples from 19 sites near the collision and found that five had petroleum substances at levels exceeding standards. A SOA statement on January 23 reported that some samples met the government’s baseline contamination standard, while others exceeded it, marine conservationist Rick Steiner explains. Satellite images suggest fishing continued nearby for days after the spill. Weeks later, authorities ordered a ban on fishing in the surrounding areas.

The New York Times reported that on February 1 officials in Beijing announced samples of fish within four to five nautical miles of the sunken Sanchi contained traces of petroleum, possibly indicating they had been contaminated by condensate. The Times said the spill has “almost certainly” invaded a marine ecosystem that “includes some of the world’s most bountiful fisheries” near Zhoushan, an archipelago in eastern China.

“Once you have had a disaster like this, you have basically lost the war,” said one oil spill expert.

A “toxic, submerged plume” likely spread from the sunken ship starting on day one, says Steiner, a former University of Alaska professor who has consulted with governments worldwide on oil spill response. The East China Sea is a rich marine ecosystem, with over 200 species of fish, as well as squid, cuttlefish, crab, seabirds, whales, porpoises, and seals (though it has been depleted and damaged by overfishing and pollution). Marine organisms could absorb the condensate through ingestion, respiration, and direct contact.

Tensions between China and Japan reportedly slowed the response to the spill. Experts predict the oil will drift further into a Japanese-claimed economic zone and eventually reach the coasts of the islands Kyushu and Shikoku.

Condensate is an ultra-light petroleum and a byproduct of natural gas production. It is also a highly valuable material, used in jet fuel and often added to sticky, oil-rich tar sands to help them become less viscous. Condensate contains toxic components that cause air pollution as well as compounds that, when broken down, generate pollutants such as nitric oxide and nitrogen dioxide which can be poisonous to humans, according to Greenpeace.

While condensate spills have occurred before, the Sanchi spill is the largest in history. The tricky part of assessing the environmental impacts of the disaster is that no one knows for sure exactly how much condensate burned, evaporated, or dissolved.

Ed Overton, a retired professor of environmental chemistry at Louisiana State University who has studied oil spills for four decades, said it looks like much of the oil burned. Experts say there’s not much that can be done to clean up condensate, though monitoring where it travels is crucial. What didn’t burn or evaporate will likely dissolve into the water, where it will remain toxic until it dilutes enough to be broken down by natural processes.

Overton also pointed out that some of the circumstances of the spill might mitigate its risks. The spill occurred in the open ocean, about 160 nautical miles off the coast of China. Condensate generally does not linger in the environment as long as heavier crude oils, like the oils from the Deepwater Horizon disaster in 2010 and the 1989 Exxon Valdez oil spill. (In comparison to the 111,000 metric tons of condensate aboard the Sanchi, the Exxon Valdez oil spill involved 35,000 metric tons of thick black crude oil.)

But while the Sanchi spill may be largely invisible and less permanent than past crude oil disasters, the massive spill of a toxic oil is undoubtedly going to cause some harm, Steiner says. “There’s a conventional human bias in oil spills that looks at oil on the sea surface and oil that comes ashore,” says Steiner. “That seems to be what a lot of people care most about, and that is an illogical and inappropriate perspective on damage caused by petroleum spills like these.”

For now, marine conservationists can only speculate about where the spilled oil is going and what damage it has done.

“Once you have had a disaster like this, you have basically lost the war,” says Steiner. “The lesson is to prevent the next one from happening.”