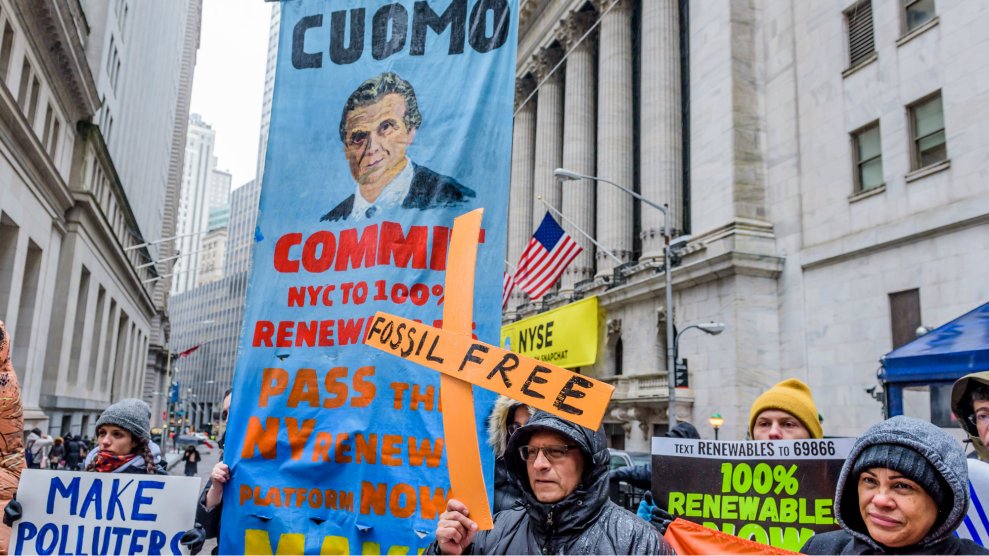 On Friday, Cynthia Nixon, the activist and actor whose progressive primary challenge to Cuomo’s bid for a third term is garnering surging support, unveiled one of the most ambitious climate platforms in the nation, calling for 100 percent renewable energy, a ban on all new fossil fuel infrastructure, and penalties for polluters.

And on Monday, 19 buses carrying more than 1,500 activists from across the state converged on the state capital to protest Cuomo’s failure to do more about climate change in his eight years in office, and make demands that looked identical to Nixon’s platform. It was the largest environmental protest against Cuomo since anti-fracking activists staged demonstrations in 2014.

The protest started in a historically black neighborhood on Albany’s Sheridan Avenue. The state plans to build a 16-megawatt gas-fired power station there in the same location where, until 1994, a trash incinerator plant had showered the neighborhood with soot. Nixon joined the activists shortly after noon, and though she didn’t formally address the crowd, she took photos with activists and spoke to reporters.

The neighborhood “has a really terrible racist history of environmental pollution,” Nixon said, and reiterated her call to move the state to 100 percent renewable energy. “Fracked gas is not a bridge to a cleaner energy economy.”

After a few speeches, the protesters marched about a mile under a blistering sun to the state capitol, chanting, “Heyo Cuomo, walk the talk, the power of the people cannot be stopped” to a tune similar to Queen’s “We Will Rock You.”

To some, Cuomo’s status as a climate pariah may be surprising. In 2014, he put a moratorium on hydraulic fracturing, or fracking, for natural gas in the state. In 2015, Al Gore joined the governor as he announced plans to cut the state’s greenhouse gases emissions 40 percent by 2030. Last June, Cuomo loudly rejected President Donald Trump’s move to withdraw the United States from the Paris climate accord, ramping up New York’s pledge to produce half its electricity from renewables by 2030 and forging a new alliance with the governors of Washington and California to stick to the goals agreed to by former President Barack Obama. “Climate change is a reality, and not to address it is gross negligence by government,” said Cuomo, according to a new page on the state website with the banner: “Environment Leadership.”

“Climate change is a reality, and not to address it is gross negligence by government,” said Cuomo, according to a new page on the state website with the banner: “Environment Leadership.”

But Cuomo’s policies still fail to meet even the baseline targets scientists say are needed to make a difference on global warming. His reduction targets focus exclusively on power plants, ignoring the majority of the state’s emissions that come from buildings and vehicles. He has no plan to get the state to 100 percent renewable electricity, and has offered little to protect low-income communities and neighborhoods of color that suffer most from the impacts of climate change. The state’s pension funds remain invested in fossil fuels, and polluters face no penalties in the form of fines on climate-linked damage or taxes on emissions.

Cuomo’s press office did not respond to a request for comment.

As Nixon gains in the polls and lands magazine covers, Cuomo is scrambling to act on long-neglected progressive demands. Three weeks ago, over coffee and cookies at a Manhattan steakhouse, the governor made a deal to disband the Independent Democratic Conference, known as the IDC. The group of eight breakaway Democrats in the state Senate caucused with Republicans, guaranteeing a conservative majority in the chamber ― now only one holdout, Brooklyn Democrat Simcha Felder, has left Republicans with a flimsy one-vote majority.

Cuomo also signed an executive order last week restoring voting rights to felons on parole and voiced support for legalizing recreational marijuana, a policy Nixon made a platform issue in her campaign. On Friday, almost simultaneous to the release of Nixon’s climate platform, Cuomo denied a water quality permit to a new natural gas pipeline environmentalists have protested for months, and announced a new energy efficiency initiative that would account for one-third of the emissions cuts required to meet his 2030 target.

On Monday, Cuomo announced plans to introduce a state ban on plastic bags, despite signing a moratorium to block New York City from putting a 5-cent fee on plastic bags last year.

But Cuomo’s next big test on climate change is one he has already failed twice. For the third time in as many years, the state assembly is slated to vote this week on the latest version of the New York State Climate and Community Protection Act, known as the CCPA. The bill is widely considered the most ambitious and egalitarian climate legislation introduced anywhere in the nation. Heather McGhee, president of the left-leaning think tank Demos, and the economist Robert Reich called it “the most progressive climate-equity policy we’ve seen.”

The legislation, first introduced in 2016, calls for 100 percent renewable energy statewide by 2050 and orders state agencies to draft plans to cut greenhouse gas emissions from power plants, buildings and vehicles. It requires 40 percent of state energy funding to go to the low-income neighborhoods and communities of color most vulnerable to sea level rise and extreme weather, and includes wage standards backed by labor unions for all state-funded green energy projects. If enacted, the bill’s proponents say it would create more than 100,000 jobs.

Cuomo has never come out in support of the CCPA. He refused for years to crack down on the IDC, which has until now blocked the bill from ever coming to a vote in the Senate.

“So far it’s been a failure of leadership,” said Dan Sherrell, campaign coordinator at the nonprofit New York Renews. “The governor has remained deafeningly silent on it.”

Sherrell said state legislators plan to introduce a bill to levy penalties on corporate polluters “before the end of the session,” but declined to comment on which lawmakers with whom New York Renews was in talks.

“So far it’s been a failure of leadership. The governor has remained deafeningly silent on it.”

For Assemblyman Steve Englebright, the Long Island Democrat who first introduced the CCPA, the bill is 20 years overdue. The 71-year-old lawmaker from Setauket, a coastal hamlet on Long Island Sound, started warning about the threat of runaway global warming two decades ago. He has since sponsored several bills to support solar and wind production, at least three of which became laws. In 2016, he became chairman of the Assembly Committee on Environmental Conservation and moved swiftly to draft and introduce the CCPA.

Now, on his third attempt, he has more than two dozen co-sponsors and support from Nixon, who pledged in her platform to fight to pass the bill.

“There needs to be some adjustments made in the perception of how important this bill is to bring it into the executive chamber, ready for the governor’s signature,” Englebright said Friday. “If we can get it onto his desk, he’ll have no choice but to sign it.”

Enacting legislation like the CCPA should prove popular. New York is among the most progressive states in the country on climate change according to polling data.

New Yorkers overwhelmingly support environmental regulations even at an economic cost. Seventy-one percent of New Yorkers support expanding renewable energy generation even if it raises electricity prices, compared to 61 percent nationwide, according to Cooperative Congressional Election Study’s 2016 survey results analyzed for HuffPost by Data for Progress, a left-leaning think tank. That support cuts across demographics, including 75 percent of people aged 18 to 29 and 67 percent of people 65 years and older; 73 percent of urban dwellers and 67 percent of rural New Yorkers; and 74 percent of black people and 69 percent of whites.

Sixty-seven percent of New Yorkers support strengthening enforcement of clean air and water regulations even if it costs U.S. jobs, compared to 58 percent nationwide. The support breaks down similarly across the state, with 73 percent of people aged 18 to 29 and 61 percent of people 65 and older; 71 percent of urbanites and 60 percent of rural people; and 75 percent of black people and 64 percent of whites.

“Cuomo is fundamentally a safe governor, and a safe governor should support this,” said Sean McElwee, the New York-based political analyst and co-founder Data for Progress. “He’s an anti-progressive, and he’s someone who reflexively despises and tries to undo any progressive policy.”

Cuomo has faced criticism over other environmental issues, notably his administration’s shortcomings in dealing with a toxic drinking water in two northern New York municipalities. In February, the City of Newburgh, an impoverished community of color in the Hudson Valley, announced plans to sue the governor to force the state to clean up the site where a cancer-causing chemical spilled into a stream feeding its aquifer.

The protest Monday put a spotlight on a bribery scandal that has dogged Cuomo for the past year. A former top aide stands accused of taking $287,000 in bribes from Competitive Power Ventures, a Maryland-based company bidding to build a natural gas plant in Orange County, in New York’s Hudson Valley. The firm made more than $94,000 in donations to Cuomo’s campaign, plus another $50,000 to the state Democratic Committee in 2013. Signs reading “Stop CPV” and “No Fracking Gas Power Plants!” bristled from the crowd as the protesters marched.

But Cuomo’s penchant for emissions-heavy travel may be the most damning indictment of his climate record. In 2011, Cuomo’s regular use of government aircraft to fly between Albany and his home in Westchester cost the state about $13,000 at a time when the governor was cutting the budget. He took an average of 10 flights per month in his first four and half years in office, and sent a State Police helicopter to bring actor Robert De Niro to a tourism promotion event in the Catskills, according to a Politico report published in 2016.

That could come back to haunt Cuomo a time when embattled Environmental Protection Agency Administrator Scott Pruitt, considered the vanguard of Trump’s rollback of climate policies, is under fire for taking frequent flights and costly airfare.