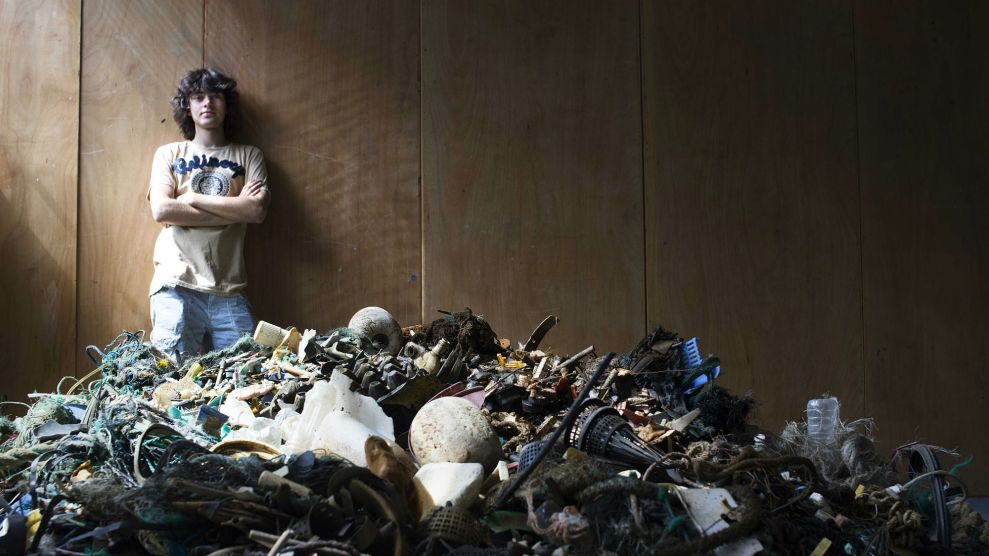 On Wednesday, among the industrial warehouses and abandoned buildings on Alameda Island, just south of Oakland, California, a small team of engineers began the early stages of constructing “System 001.” Its bland name obscures the fact that System 001 is actually a first-of-its-kind, 2,000-foot long device intended to rid the ocean of its trillions of pieces of plastic. This week, the system took one baby step toward finally being ocean-ready.

It’s designed sort of like an enormous and porous shower curtain: One long, U-shaped black polyethylene tube will attach to a nylon screen hanging underwater, while the entire device drifts across the ocean, using currents to collect plastic before the debris is ultimately removed.

In its final form, the floating plastic-eater will be autonomous and powered by solar energy, meaning it will be controlled by algorithms and free to roam within the ocean’s plastic hotspots. And, its curtain-like design prevents marine animals from getting trapped, as they would in a net.

It will be the longest ocean structure ever to be deployed, and the Dutch non-profit behind it, the Ocean Cleanup, hopes a swarm of these U-shaped tubes will remove half of the 1.6-million-square-kilometer Great Pacific Garbage Patch (consisting largely of plastics) floating between California and Hawaii in just five years—and 90 percent of accumulated ocean plastic by 2040.

The effort can not come soon enough; just last month, a study from the group, published in Nature‘s Scientific Reports, found that the patch is 16 times larger than previous estimates. On Wednesday, the boyish Ocean Cleanup CEO Boyan Slat said, “It’s the first time anyone is doing anything like this. So, it’s still very much a beta system…I’m sure there will still be things that will go wrong, but that’s why we’re doing it, really, to improve it—so eventually we can deploy an entire fleet of these systems.”

Despite its size and multi-million dollar price tag, the project has humble origins. Slat was just 16 years old when a diving trip in Greece inspired him to clean the world’s oceans. “I saw more plastic bags than fish,” he has said about the trip. He went on to eventually present his idea for a massive, plastic-collecting system in a TEDx talk in 2012, recruited a team in 2013, and in 2014, he and his team raised over $2 million in 100 days to fund the project.

Four years and about $40 million in fundraising later, the 23-year-old Slat is finally seeing his vision come to life. “We’re ready to launch the world’s first ocean cleanup system,” he said Wednesday, standing in front of a blueprint of the contraption. “Which is being built right here.”

From Alameda, System 001 will be towed along the coast of California and then sent 240 nautical miles offshore, for a “dress rehearsal,” of sorts. The team will ensure the system functions properly, and look for any damage to the structure caused by towing or rough ocean conditions before deploying it to the Great Pacific Garbage Patch. In the end, if all goes well, 60 of these things will be floating around the Pacific.

Cleaning the world’s oceans is no small task. The Great Pacific Garbage Patch alone is three times the size of France. And although the mass production of plastics began about six decades ago, according to the UN, the world now produces hundreds of millions of metric tons of plastic each year—with more than 8 million metric tons of it ending up in the ocean. By 2050, some scientists estimate the seas will hold more plastic than fish.

That’s at least part of the reason why the project has seen its fair share of criticism. Roland Geyer, a professor of industrial ecology and green supply chain management at UC-Santa Barbara, tells Mother Jones an effort to clean the Great Pacific Garbage Patch is “somewhat pointless” because the vast majority of plastic in the ocean isn’t floating on the surface, and even as you work to clean it up, more plastic enters the ocean every day. “Their heart is in the right place,” he says about the Ocean Cleanup. “But I think their efforts could be better off elsewhere.”

Despite the criticism, the group has continued raising funds and has shown no sign of altering course. If all preliminary tests go as planned, the team expects to launch their system inside the Great Pacific Garbage Patch, 1,200 nautical miles offshore, this summer, with hopes to bring the first haul of plastic in by the end of the year. The plastics can then be turned into and sold as products, like the Ocean Cleanup sunglasses pictured below.

“Plastic doesn’t have to be ocean plastic pollution.” says Slat. “I think it’s really time to go clean it up.”