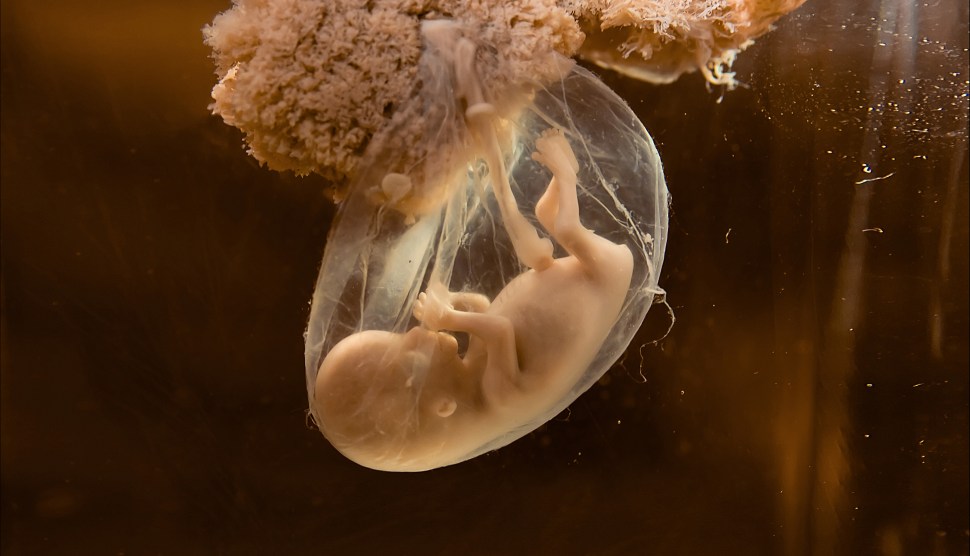 For decades, researchers have observed that people whose mothers had complicated pregnancies have higher rates of schizophrenia, but no one knew why this was. Could traumatic pregnancies somehow compromise the brain development of the fetus, causing schizophrenia? Or was it the reverse: Did something about the genes that cause schizophrenia also lead to adverse events in utero? Now, for the first time, scientists have evidence that serious pregnancy complications can activate certain schizophrenia genes. The findings have major implications for further research into how certain events in a woman’s pregnancy may change the way her child’s genes behave.

“The more the placenta is inflamed, the more the schizophrenia genes get turned on.”

The study, published earlier this week in Nature, describes how a team of researchers at the Lieber Institute for Brain Development in Baltimore looked at a population of 2,038 people with schizophrenia and 747 without the disease. They analyzed the participants’ genetic makeup, looking for the presence of certain genes that are associated with the disorder. Then, they cross-referenced the genetic findings with detailed medical histories of the participants’ mothers’ pregnancies, looking for serious complications like preeclampsia, growth restrictions, water breaking prematurely, and emergency cesarean sections. The team found that among people who carried the schizophrenia genes, rates of the actual disease were five times more common in those whose mothers had experienced pregnancy problems.

The researchers traced the connection to the placenta, the organ formed during pregnancy to carry oxygen and nutrients to the developing fetus. About a third of the genes associated with schizophrenia are found in the placenta, and people who carried those genes were especially likely to develop schizophrenia when there was a pregnancy complication. “We do believe this is fundamentally an environmental factor,” says psychiatrist Daniel Weinberger, a lead author on the study and the director and CEO of the Lieber Institute. “The more the placenta is inflamed, the more the schizophrenia genes get turned on.”

It’s important to note that even in the group that had both risk factors—schizophrenia genes and mothers with pregnancy problems—the overall rate of schizophrenia was still only about 15 percent, compared to less than 1 percent in the general population.

The findings raise interesting questions about the interplay between the uterine environment and gene expression. Weinberger points out that schizophrenia—as well as other brain disorders such as ADHD and autism—are more common in males. Researchers have observed for some time that male newborns are less resilient than females. “We think that male placentas may be more sensitive to environmental stress,” said Weinberger.

The research made me wonder about something else. In attempting to account for the high rates of pregnancy complications among African American women, high levels of stress linked to their experience of racism has been implicated as a possible factor. African Americans also have elevated rates of schizophrenia. So could the racism that contributes to black mothers’ difficult pregnancies also indirectly raise their offsprings’ risk for schizophrenia? It’s not an easy question to answer. Schizophrenia is a complicated disease, and many people believe that it has been overdiagnosed among African Americans. When I asked Weinberger about the possible connection, he acknowledged this “would be something to look at in the future.”

I also ran that idea by Greg Miller, Northwestern University professor of psychology who has studied how stress affects African American mothers’ placentas. Miller emphasized that Weinberger’s study was outside his realm of expertise, but he calls the results “interesting and provocative.” He added, “Given the considerable racial disparities in perinatal complication rates, they could help explain why Blacks have higher risks of schizophrenia.”

But the broader implication of the new research, Weinberger said, is that it underscores the importance of placenta—which he describes as “the most neglected organ in the human body.” Another group in his lab is currently growing placentas from stem cells to try to figure out whether exposure to the stress hormone cortisol will make them less healthy. “When you think about all the possible ways that this organ could influence a person’s life,” he says, “it’s a new frontier.”