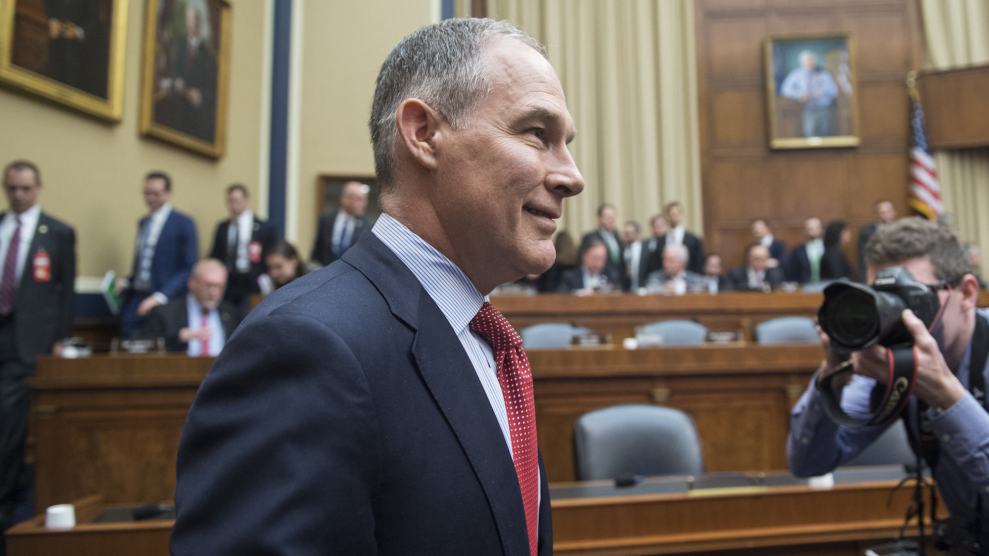 EPA Administrator Scott Pruitt is facing investigations into his housing arrangements with a lobbyist, his travel expenses, and his security detail. He has authorized raises for staff in spite of being told not to by the White House, and he allegedly retaliated against EPA whistleblowers. This adds up to at least 11 audits and investigations from the Office of Inspector General and Government Accountability Office, with more news of his ethical lapses seeming to break every day. In order to address these problems, according to the New York Times, the former Oklahoma attorney general has decided he is going to need extra help from a private legal defense fund.

Most onlookers would agree that Pruitt probably does need some legal help. A lawyer himself, having practiced decades ago before his career in politics, he has nonetheless found himself ensnared in problems of his own making—for example, his own ethics office did not have full information about his questionable living arrangement until after they were made public.

Legal defense funds aren’t that unusual: The Clintons used them, and they’ve cropped up again in the Trump administration to help defray the costs for officials and campaign staffers in Robert Mueller’s investigation.

But as the head environmental regulator, Pruitt’s decision to get a legal defense fund raises even more questions for government ethics experts, who have trouble envisioning how he will accept donations without creating another ethical mess. “Any time Pruitt has an opportunity to use public office for private gain, I would raise a red flag,” says Kathleen Clark, a legal ethics professor at the Washington University in St. Louis.

“Any time Pruitt has an opportunity to use public office for private gain, I would raise a red flag.”

One of the basic questions is where the money for this fund would come from. “The usual suspects [are] the people who shouldn’t donate, people with a stake before the EPA,” Clark added. “So who else is going to do this? There are restrictions on the ability of government officials to accept anything of value from people who are regulated by their agency. Especially in light of Pruitt’s history of getting things of value from those who have a stake in government action, there’s even more reason to be concerned about a legal defense fund set up for him.”

Pruitt’s base would likely be eager to help, but this presents another snag. His staunchest supporters hail from the fossil fuel industry, which would be considered a “prohibited source.” And the Office of Government Ethics decided last fall that anonymous donations aren’t allowed for funds set up for government employees.

“OGE has given some guidance on legal defense funds. Pruitt cannot accept gifts from prohibited sources (entities with business before the agency), and he should not accept gifts from anonymous sources,” Virginia Canter, executive branch counsel for Citizens for Responsibility Ethics in Washington (CREW), says. “He also should be reporting all donations received by his [legal defense fund], and gifts that exceed $375 are required to be reported as part of his public financial disclosure report.”

The fund has not been set up yet, and many of the details of how he will do it are still unclear. If Pruitt sets one up in his name or has someone set it up for him, it could involve different rules and different types of tax status. Robert Rizzi, a tax lawyer with experience in legal defense funds, notes that there is no standard format that Pruitt would follow. “Each of these types of funds can raise tax issues for the entity, the donors, and the beneficiary, and also can raise potential government ethics issues if the beneficiaries are federal employees.”

In the end, CREW’s Canter thinks the most unusual aspect of Pruitt’s legal defense fund is that he needs one at all.

“Legal defense funds can be expensive and difficult to maintain due to extensive screening, compliance, and reporting requirements,” Canter notes. “From that perspective alone, he would be better off resigning.”