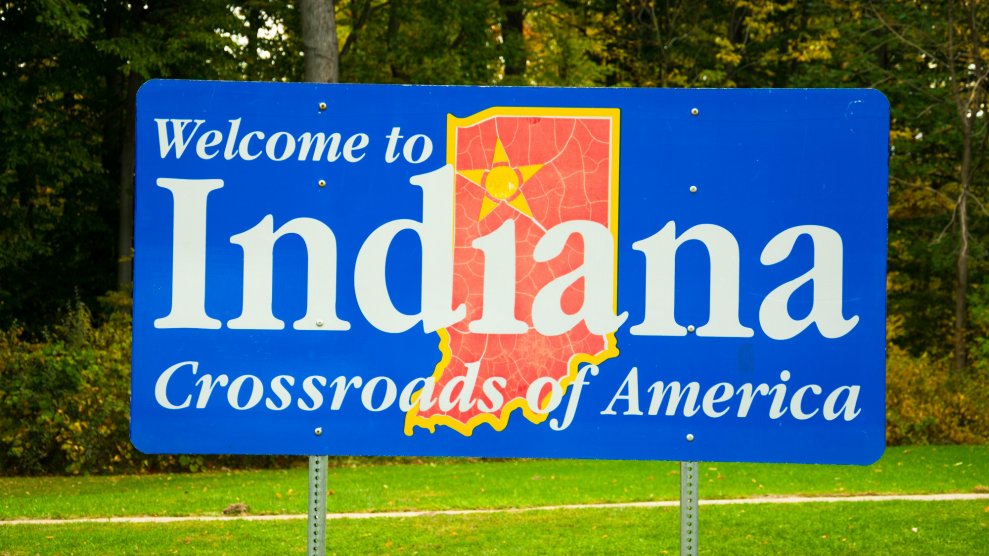 In northwest Indiana, it seems as if no city is safe from lead pollution. According to a report from the Chicago Tribune, the Environmental Protection Agency has found alarmingly high levels of lead in the soil in dozens of yards in Hammond and Whiting, Indiana, neighboring cities in the industrial sector of the state. The EPA is just beginning to release the results from the first round of testing, but some residents weren’t surprised.

“We’d known for quite some time that there was some contamination there,” says Thomas Frank, an environmental activist who lives in East Chicago, Indiana, a city a few miles away which is experiencing a similar lead crisis. For the last century, northwest Indiana has been a hub for industry, including oil refineries, steel mills, and lead processing plants. It’s littered with toxic waste sites just waiting to be discovered. But the Indiana Department of Environmental Management (IDEM), the state agency tasked with protecting the environment, has come under fire for allowing lead pollution to continue.

The lead, which can cause learning disabilities in young children, is coming from the now-shuttered Federated Metals Corporation, a lead smelter plant which operated from 1937 to 1983. According to the Chicago Tribune, nearly 10,000 people live within a mile of the company’s old site. Between 2005 and 2015, 53 children younger than the age of six who lived near the site had lead levels exceeding the federal limit.

“They knew this problem existed and kind of just buried their heads in the sand.”

EPA guidelines for lead levels in soil where children play is 400 parts per million, and 1,200 ppm for the rest of the yard. During testing, the EPA found 25 homes with lead levels exceeding that, including nine residential yards above 1,200 ppm and one as high as 2,760 ppm. The agency plans on conducting additional testing to see how widespread the problem is.

Whiting is a small city of about 5,000, while Hammond’s population hovers near 80,000. The working class area has long been dominated by the lead, steel, and oil industries. For older generations, that was once a sense of pride as it provided jobs and stability, but old factories are now a symbol of a systemic environmental issue. “They don’t want to look at what they’re so proud of and see that it’s harming them,” Frank says.

“The state and city have known about this for many years and did nothing,” says Dave Dabertin, a lawyer who lives nearby and was the regional director for IDEM, the state environmental agency, in the 1990s. “They knew this problem existed and kind of just buried their heads in the sand.”

The Federal Metals Corporation shut down its operating site in 1983, and from 2001 to 2006, the property was subject to a cleanup by the EPA after lead pollution was found at the property. Since 2007, two lead smelting companies have operated in the space—Northern Indiana Metals and Whiting Metals. The Whiting Metals’ 10-year air permit issued by the Indiana Department of Environmental Management was set to expire in August 2017, so the company applied for a renewal.

While IDEM was assessing Whiting’s permit request, the EPA was already in town testing the soil. In late 2016 and early 2017, the EPA sampled soil near the property to determine whether or not the soil in residential areas had been contaminated with lead. When the tests came back positive for lead in January of this year, the agency informed residents. Follow-up testing occurred in April and the EPA is expected to inform residents of those results at an unspecified date in the future.

Before Whiting’s permit was scheduled to expire, members of the community fought against the renewal. “The folly of permitting a lead source in a neighborhood that may already be contaminated with lead is obvious,” Dabertin wrote in a public comment submitted to IDEM in May 2017. Much to Dabertin and other residents dismay, the agency never held a public hearing and approved the permit in December 2017. “It’s like throwing gasoline on a fire,” Dabertin tells Mother Jones.

The lead that Whiting Metals emits into the air is not on the same scale as the old smelting plant. For nearly 50 years, the Federated Metals Corporation polluted the soil in the surrounding area.“But it all adds up,” explains Sam Henderson, a legal fellow at the Hoosier Environmental Council, a non-profit environmental organization.

Lead-contaminated soil is a region-wide issue. Just a few miles away in East Chicago, a city of 29,000 with a majority-minority population, a similar crisis is unfolding. In 2014, the EPA declared a lead plant, the USS Lead, a Superfund site, a designation reserved for the nation’s most toxic sites, and began cleaning up the soil. But in 2016, a Reuters investigation found that children living near the site still had elevated levels of lead in their blood. When the EPA tested the water, it found that the city’s water was also contaminated. Approximately 1,200 residents—including nearly 700 children—were ordered to leave a public housing complex with contaminated soil.

Looking at what happened in East Chicago, many residents in Hammond and Whiting are fearing the worst. Henderson says, “there’s some concern that this may just be the tip of the iceberg.”