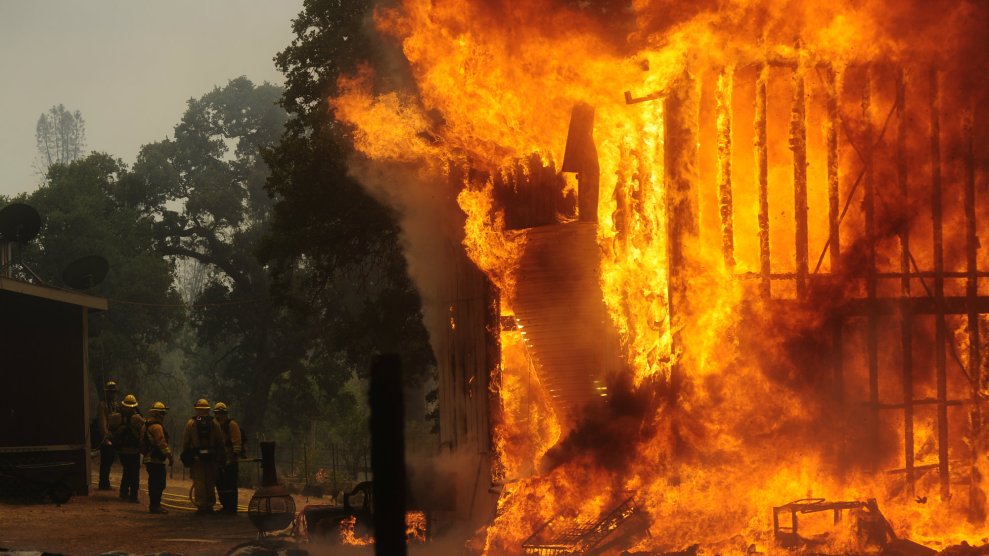 Rod Harper walked across a carpet of ash, nails, and broken glass to the burned-out skeletons of two of his vehicles. On the ground, several pools of melted aluminum stood out against the scorched earth.

The Pawnee Fire was so hot when it ripped through his property in Northern California’s Lake County late Saturday that it liquified the cars’ wheels. The hardened flows were all that remained.

Harper, 57, said he would have stayed and fought to save his home, against the order of local authorities. But his wife, Katy Brogan, is recovering from a hip replacement, and he needed to make sure she made it to a safe location.

“You might put your own life on black or red,” he said. “But not your wife and kids.”

Trying to stick it out could have cost him far more than he lost. Not long after evacuating Saturday, Harper got word that his house was fully engulfed. He returned home after California Department of Forestry and Fire Protection officials lifted an evacuation order for the area midday Tuesday. HuffPost found him standing in front of his razed home, the crumpled remains of kitchen appliances and a spring bed poking out of the rubble behind him.

Along with his home, Harper lost two new business ventures: a food truck that he recently began, serving barbecue, and a trailer he turned into a portable coffee shop. They were supposed to be his new chapter in life.

“We hadn’t even gotten off the ground yet,” he said. “Now it’s in the ground.”

Rod Harper, 57, lost everything in the #PawneeFire. His house, vehicles and his new business ventures: a BBQ food truck and portable coffee shop. His optimism in the face of such devastating loss was incredibly inspiring.
“Forward and up,” he told me.
Story to come. pic.twitter.com/fJV6ubK28X

It’s not the expensive espresso machines, the cars, or the kitchenware that Harper is most upset about. It’s the items that can’t be replaced: snow globes his children made for him out of old peanut butter jars, and his wife’s collection of Grateful Dead memorabilia.

The Pawnee Fire is California’s largest wildfire of 2018. As of Wednesday evening, it had burned 13,700 acres and destroyed 22 structures, including several homes, according to Cal Fire officials. An additional six structures were damaged.

After two days of explosive activity, firefighters turned a corner Tuesday. The blaze was 30 percent contained by Wednesday evening, officials said. No casualties have been reported.

HuffPost toured the area Wednesday with an official from Cal Fire. Fire lines cut by dozers crisscrossed the blackened hillsides above this residential valley. Treetops were stained red from air tankers dropping fire retardant in an effort to hold back the flames. And crews roamed the blackened hillsides cutting down hazardous trees and extinguishing still-smoldering embers.

At one property, firefighters found the remains of a dog killed inside a home. At two others, antique cars burned up inside closed garages.

The active start to the 2018 fire season comes as California continues reeling from last year’s devastation, which included both the most destructive and largest fires on record.

Like many areas of California, Lake County is well aware of the threat. There have been several large blazes in this area in recent years, including the Clayton Fire in 2016 and the Valley Fire in 2015. The Valley Fire scorched more than 76,000 acres, destroyed nearly 2,000 structures and killed four civilians.

The Pawnee Fire threatened around 600 homes and put 1,500 people under an evacuation order. Until the order was lifted, dozens of evacuees were camped out at Lake County’s Moose Lodge. Among them was 80-year-old Carol Weber, who has lived in Spring Valley for more than two decades.

Resting on a cot inside the lodge, Weber said it was the fourth time she’s been evacuated from her home in the valley.

“We’re getting used to it,” she said. “You’ve got to have your bags ready.”

Weber, as of Tuesday, hadn’t heard whether her house had made it. She was hopeful and anxious to return home.

Fire crews managed to spare many residences. One belonged to Army veteran William Hern, who was at a convenience store in the valley shortly after the evacuation order lifted, thanking firefighters for their hard work. The blaze, he said, came within feet of his home.

Hern glanced up at the charred mountains. “It sure looks different—more like Arizona,” he said.

Despite his devastating loss, Harper was inspiringly optimistic. Sometimes, he said, a person gets the “wrong end of the fucking barrel.” This time it was him.