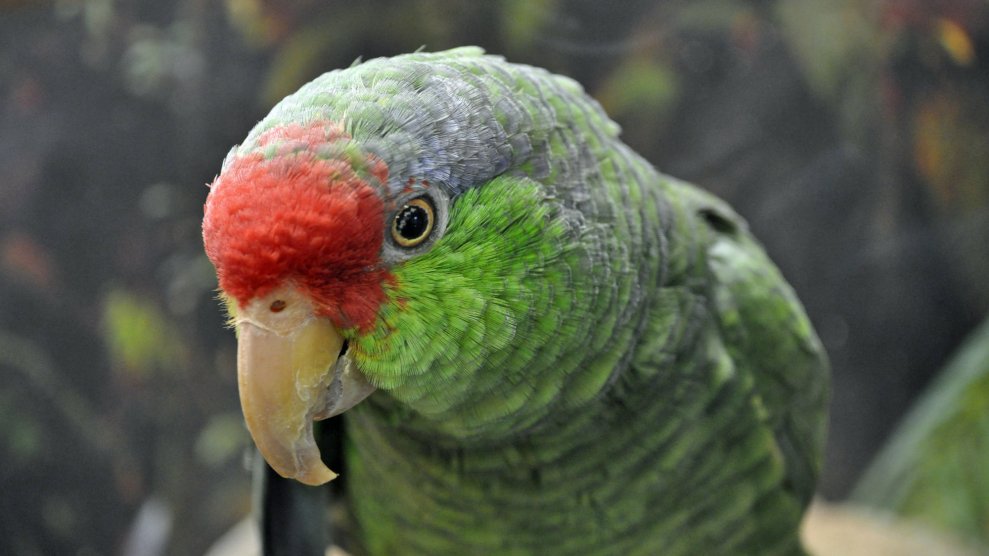 Her name was Lola. No, not “L-O-L-A, Lola” from the Kinks song, but a Mexican redhead.

Well actually, not that either, it turned out.

“We don’t really say that anymore,” the avian veterinarian said as he helped Lola out of her carrier. “She’s an Amazon. A green-cheeked Amazon, Amazona viridigenalis. That’s what the scientific name means. Though most people just call them red-crowned parrots.”

That was my introduction to a bird species, one of whom I adopted 10 years ago from a friend of a friend, as these things go among people who live with pet birds. But it was only after I moved to Los Angeles that I found out about her feral cousins, the large, wild flocks of red-crowned parrots that live in the San Gabriel Valley, just northeast of Los Angeles.

Parrots, of course, are not uncommon around Los Angeles: More than a dozen different species have established wild populations in the area, descendants of pet birds that escaped at some point and managed to make a home for themselves in some part of the sprawling metropolis. But for red-crowned parrots, Los Angeles is more than an additional habitat. The city is a sanctuary for this endangered species.

In the 1970s and ’80s, tens of thousands of chicks and adults were poached from the red-crowned parrots’ original habitat in northeastern Mexico, in the states of Tamaulipas and San Luis Potosí, and brought to the United States to be sold in the pet trade. Because of the poaching and habitat loss from deforestation, their population dwindled in Mexico, and red-crowned parrots are now listed as an endangered species in Mexico and by the International Union for the Conservation of Nature.

In the Los Angeles area, there are about 2,000 to 3,000 individuals, a number that could at this point rival or exceed that of the remaining wild population in Mexico.

In the meantime, however, their pet cousins in the United States escaped or were let go by owners who realized too late that wild-caught parrots make terrible pets, and that even tamed ones are demanding and noisy. Red-crowned parrots established sizable wild populations in Florida and California. In the Los Angeles area, there are about 2,000 to 3,000 individuals, a number that could at this point rival or exceed that of the remaining wild population in Mexico. Feeding largely on non-native nut and fruit trees, red-crowned parrots started to breed and became a permanent feature of the greater Los Angeles landscape over the course of the 1980s and ’90s.

In 2001, the California Bird Records Committee added them to the list of California state birds, where they joined species such as house sparrows, rock pigeons (the ones that perch on every urban power line), and starlings: species that are not native to the state, but have become integrated into California ecosystems over the last century.

I feel a small sense of wonder every time it strikes me that two of the birds who live with me are members of an endangered species whose members have become “naturalized citizens” of California. And I’ve been overcome with awe every time I’ve gone to see hundreds of red-crowned parrots come in to land in one of their night roosts in Pasadena.

But the implications of these parrots’ presence in the city goes beyond emotion and aesthetics. It makes me wonder: Could Los Angeles become a sanctuary for other endangered species—even those who are not native to Southern California?

Some ecologists think so. Brad Shaffer, a biology professor at the University of California-Los Angeles, notes that cities not only destroy habitat, but create new living spaces for animals and plants. Some of these spaces work well for native species, while others don’t. Some of these modified landscapes could offer refuge to species struggling to survive in their original habitats elsewhere.

In the past, some of the new ecological niches created in cities have been occupied by non-native species through sheer serendipity, by plants or animals like the red-crowned parrots that happened to land in town and know how to take advantage of the niches they found.

Shaffer suggests that spotted turtles, for instance, which are endangered on the East Coast of the United States, might thrive in Los Angeles. Endangered geckos might find an ecological niche on and around parts of our buildings that are currently unoccupied by any native lizards.

Of course, any experiment along these lines would have to be carefully planned and closely monitored—both to protect the introduced plants or animals from being exposed to new risks, and to prevent them from becoming invasive and causing harm to native species we want to conserve. So a great deal of scientific, legal, and educational work would need to be done to make cities function as something like “urban arks” in our current era of a possible sixth mass extinction caused by humans.

This idea might seem counterintuitive. After all, aren’t introduced species, moved around by humans, one of the root causes of ecological crises? From eucalyptus trees to ring-necked pheasants and zebra mussels, introduced species often compete with native flora and fauna for habitat and food. In some cases, they outcompete native species and become “invasive”—a label we give to species that spread and cause harm to native ecosystems.

Examples leap readily to mind: Feral cats have eaten their way through much of Australia’s native fauna. The brown tree snake has driven at least half a dozen bird species to extinction on the island of Guam. Kudzu—an East Asian arrowroot originally introduced for erosion control—turned into “the plant that ate the South” in the United States.

These striking examples of environmental harm tend to make one forget that the majority of introduced species either disappear quickly, or integrate into existing ecosystems without triggering ecological disaster. And imagining an “urban ark” would not be the same as introducing new species into wild areas that retain intact native ecosystems, but instead into environments that are already fundamentally transformed from their earlier states. Cities are, in effect, largely novel ecosystems that offer quite different ecological opportunities—as well as risks—than the ecosystems they replaced. An “urban ark” would seek to take advantage of these opportunities rather than letting them occur by accident, as they usually do.

The fact that urban landscapes, like many agricultural landscapes, are such new ecosystems—complex patchworks of native and introduced species, some desirable, some not, some invasive, some not—has led to something of a split among ecologists today.

Restoration ecology, the effort to reconstruct ecosystems that existed in a place at a particular time in the past and to get rid of species that did not form part of the landscape in the past, remains an important project, especially in areas not primarily designed to sustain human populations.

But other ecologists have suggested that where a species comes from matters less than how it functions in its contemporary environment, especially in human-designed habitats such as cities.

From this perspective, the most important question for thinking about urban biodiversity in a city such as Los Angeles is not, “What species used to be here?” Instead we should ask, “What animals and plants should form part of our environment in the future?”

Multispecies justice aims to create better urban habitats for both humans and non-humans—sanctuaries that encourage both biological and cultural diversity.

Multispecies justice aims to create better urban habitats for both humans and nonhumans—sanctuaries that encourage both biological and cultural diversity.

Some discussions are already underway on how we might translate such a vision into reality. We could reintroduce native oaks and sages, for example, while providing space for community gardens, full of plants brought to Los Angeles from around the world. Respect for the lives of feral cats ought to be reconciled with the protection of urban birds. The need for more affordable housing should be balanced with the desire for more green spaces in urban areas that don’t have enough of either.

Turning the city into a multispecies sanctuary should be part of these discussions, not only because the city is already functioning in this way for species like the red-crowned parrots, but also because humans and non-humans might need our “urban ark” in the future.

This essay is presented in partnership with KCET and the Laboratory for Environmental Strategies (LENS) at the University of California-Los Angeles.