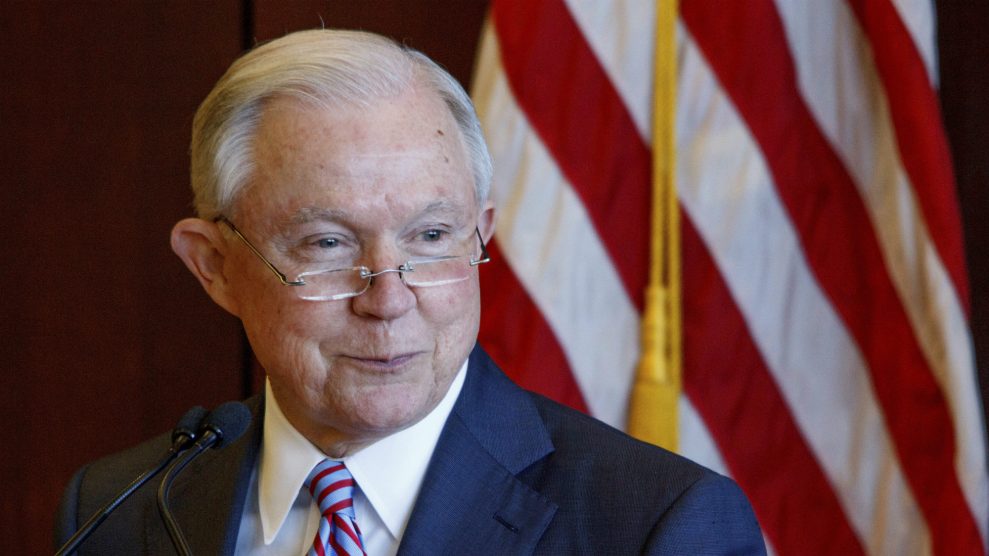 Attorney General Jeff Sessions was named Tuesday as a potential witness in the federal corruption trial of an Alabama coal executive and two politically connected attorneys in that state, according to several Alabama news reports. The case—which is part of a scandal that has drawn in many of the biggest names in Alabama politics—focuses on an alleged conspiracy to bribe a Democratic state legislator in an effort to limit the Environmental Protection Agency’s ability to clean up a Superfund site near a largely African American neighborhood in north Birmingham.

Oliver Robinson, the Democratic state legislator, has already pleaded guilty to accepting bribes from Drummond Coal, one of the most powerful businesses in Alabama. Robinson told investigators that the bribes were facilitated by two attorneys at Balch & Bingham, a major Birmingham law firm employed by Drummond. Robinson also claimed that he secretly worked on behalf of the company to oppose efforts to expand the 35th Avenue Superfund site and add it to the EPA’s National Priorities List—a designation that would have allowed the site to qualify for hundreds of millions of dollars in cleanup funds. The listing would also likely have led to the EPA pursuing companies it believed were responsible for the pollution to fund that cleanup. Drummond Coal had already been named a potentially responsible party.

The two attorneys, who worked for Drummond, and the Drummond executive were indicted on bribery charges last fall. They pleaded not guilty and have argued that Robinson was merely hired as a contractor. The defendants say Robinson never used his public office to help them.

Sessions’ name was included on a list of potential witnesses read aloud in court on Tuesday by prosecutors during jury selection. The list also included Sen. Richard Shelby (R-Ala.), Rep. Gary Palmer (R-Ala.), and a slew of powerful state legislators. The lawmakers’ inclusion on that list does not necessarily mean they will end up testifying at trial.

Previously, the US Department of Justice refused to say whether the attorney general would recuse himself from overseeing the case, which is being led by federal prosecutors under his control. A DOJ spokeswoman did not immediately respond to a request for comment on Sessions’ inclusion on the list of potential witnesses.

The 35th Avenue Superfund site is a sprawling industrial complex, composed of numerous coal processing and industrial operations scattered around a neighborhood where residents say they have suffered from unusually high rates of cancer and respiratory disease.

The possibility that Sessions, a former US senator from Alabama, could be called as a witness is not a surprise—he has well-documented ties to many of the people involved. As reported by Mother Jones and the Project On Government Oversight, Sessions’ Senate office attempted to intervene with the EPA to oppose efforts to expand the Superfund site and add it to the agency’s National Priorities List. Balch and Drummond rank as Sessions’ second- and third-biggest sources of campaign cash during his Senate career, and he employed numerous former Balch attorneys in his office.

In October, Mother Jones and POGO reported that in December 2015, a Balch & Bingham newsletter touted a meeting with Sessions to discuss the 35th Avenue site. The newsletter predicted that top Alabama lawmakers would soon send a letter to the EPA expressing concerns over the agency’s methodology when it came to assigning blame for the pollution. Just three months later, Sessions, Shelby, and Palmer sent such a letter to the EPA. Additionally, in March, Mother Jones and POGO reported that Sessions aides aggressively confronted EPA officials about the agency’s involvement at the site and appeared to parrot concerns that had previously been outlined by Balch attorneys working on the case for Drummond.