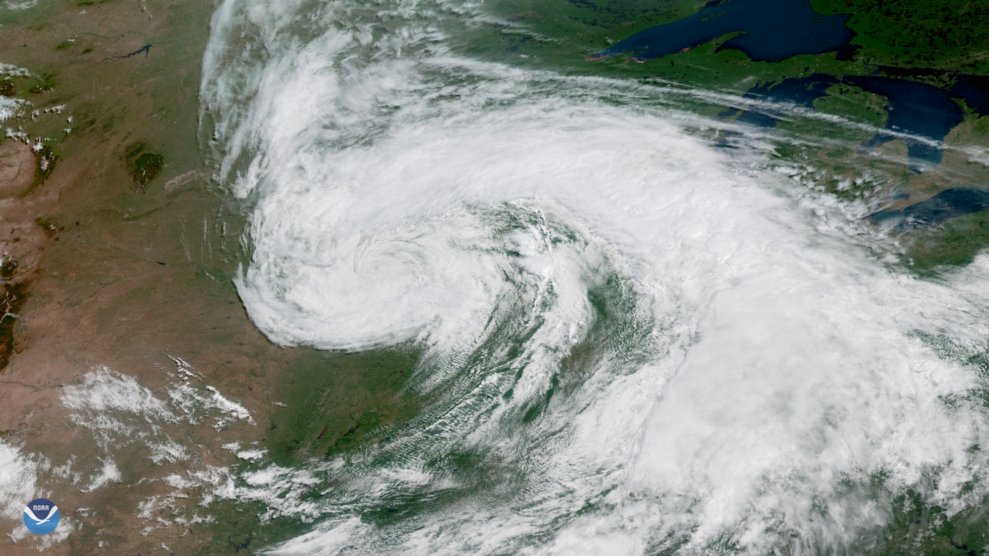 This satellite image was taken on the first day of astronomical summer from the NOAA's GOES East satellite. It captures a storm moving across the central United States.NOAA

One of the country’s major federal science agencies seems to have been forced to abandon climate change research as a key organizational focus, the New York Times revealed this week. The National Oceanic and Atmospheric Organization is responsible for managing the National Weather Service and using its network of satellites to forecast the effects of climate change. Rather than concentrate on resiliency efforts, NOAA is now charged with prioritizing “a safe, secure and growing economy empowered through accurate, reliable and timely environmental information,” according to a slideshow presented by the agency’s acting director at a Department of Commerce meeting.

The Times had the details of the policy shift, the latest under President Trump’s watch:

In the presentation, which included descriptions of the past and present missions for the agency, the past mission listed three items, starting with “to understand and predict changes in climate, weather, oceans and coasts.” In contrast, for the present mission, the word “climate” was gone, and the first line was replaced with “to observe, understand and predict atmospheric and ocean conditions.”

The presentation also included a new emphasis: “To protect lives and property, empower the economy, and support homeland and national security.”

NOAA, whose mandate includes forecasting for hurricanes and cyclical storms like El Niño, had remained relatively immune so far from the influence of climate change skeptics within the Trump administration. Just last month, NOAA researchers recorded the highest-ever levels of carbon dioxide in the atmosphere, a historic result that an agency scientist called “a whole lot of bad news” in an interview with Mother Jones. The agency promoted a similar finding on its homepage this week with the headline, “Globe had its 4th warmest May on record.”

While climate skeptics have reached positions of key importance in the Environmental Protection Agency and Department of the Interior, acting NOAA head and retired Navy admiral Timothy Gallaudet explicitly discussed the “warming of waters” and “sea-level rise” in a speech to 600 scientists and industry veterans earlier this month. “Understanding these is more important to the administration, because of what NOAA is doing in terms of advancing the blue economy,” he said.

Not all agency scientists appear willing to go along with the new protocol.

Andrew A. Rosenberg, previously the northeast regional administrator of NOAA’s National Marine Fisheries Service, described the planned shift in a statement to the Times as a “shocking change in the mission of one of the nation’s premier scientific agencies.” He said the decision was “misguided and harmful to our country.”

A current NOAA scientist who spoke anonymously to the Times suggested that the presentation might not result in any substantive changes to day-to-day work. “It’s all in how you interpret the slides,” he said. “Climate won’t be highlighted, but it will remain a fundamental part of the NOAA mission.”

NOAA has faced opposition from Republicans even before the Trump administration. In July 2015, Rep. Lamar Smith (R-Tx.), who chairs the House Natural Resources Committee, subpoenaed records from the NOAA over a research paper that suggested a 20-year break in global warming trends had been due to inaccurate data. “The research was later validated,” according to the Times.

Gallaudet diminished any strong reactions to the slideshow by noting that it was “not intended to create change in NOAA mission or policy from what it was before.” But previous government interventions into NOAA affairs suggest the White House would be unlikely not to intervene with an agency under its watch that continues to publicly discuss the potentially devastating effects of climate change.