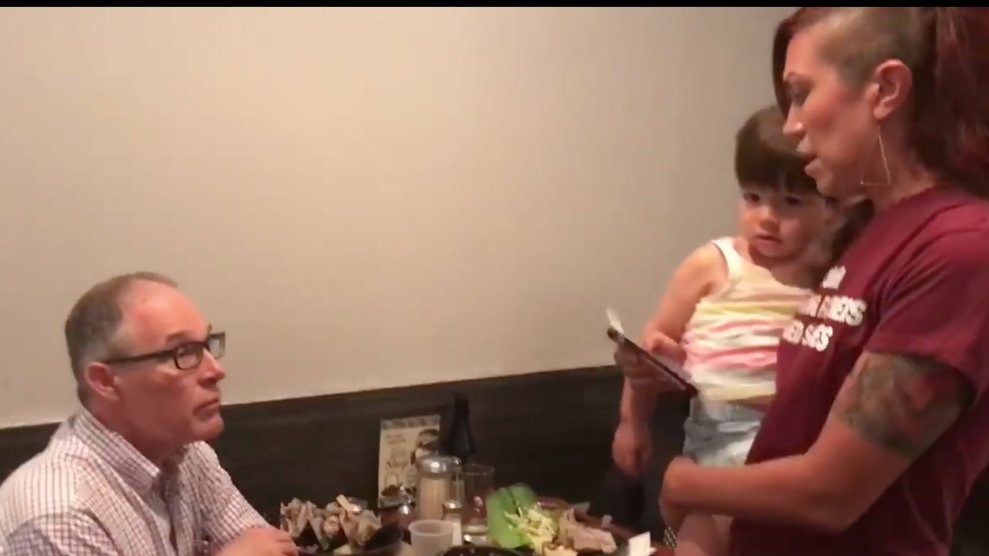 Kristin Mink, a sixth-grade teacher at Sidwell Friends School, was eating lunch with her 2-year-old son at a restaurant in Washington, DC, when she noticed Environmental Protection Agency administrator Scott Pruitt sitting three tables away.

“He’s corrupt, he’s a liar, he’s a climate change denier, and as a public servant, he should not be able to go out in public without hearing from the citizens he’s hurting,” she wrote in a Facebook post shortly after deciding to confront him. In a video that has since gone viral, Mink told Pruitt “to resign before your scandals push you out.”

Pruitt, the subject of at least 13 inquiries into his conduct as head of the nation’s top environmental regulatory agency, has rolled back Obama-era directives that would have restricted methane emissions and set more aggressive fuel efficiency standards. He was the leading voice pushing for the US to leave the Paris climate accord and has repeatedly questioned the realities of climate change. Republican and Democratic lawmakers have sharply criticized Pruitt, but President Trump has stuck by an appointee whose scandals have dwarfed the controversies that have felled other administration officials. On June 8, Trump told reporters in a press conference that the former Oklahoma attorney general is “doing a great job.”

Restaurants have become an uncomfortable flashpoint recently in an ongoing national debate over civility and activism. Trump adviser Stephen Miller and Department of Homeland Security Secretary Kirstjen Nielsen were both heckled by protesters furious with the administration’s “zero-tolerance” policy at the US border, which included separating children from their families. “If kids don’t eat in peace, you don’t eat in peace,” one protester told Nielsen while she finished up her dinner at a Mexican restaurant on June 19.

Three days later, White House Press Secretary Sarah Huckabee Sanders was asked to leave a small eatery in Lexington, Virginia, after the owner, Stephanie Wilkinson, said she could not condone the actions of the “inhumane and unethical” administration Sanders represented. The press secretary later tweeted about the encounter, prompting Trump to describe the restaurant as “dirty on the outside” and “dirty on the inside.”

The Red Hen Restaurant should focus more on cleaning its filthy canopies, doors and windows (badly needs a paint job) rather than refusing to serve a fine person like Sarah Huckabee Sanders. I always had a rule, if a restaurant is dirty on the outside, it is dirty on the inside!

Mink’s encounter with Pruitt generated no such fireworks. She said on Facebook that he remained completely silent and, before she even sat down, left the restaurant escorted by a male companion and two bodyguards.