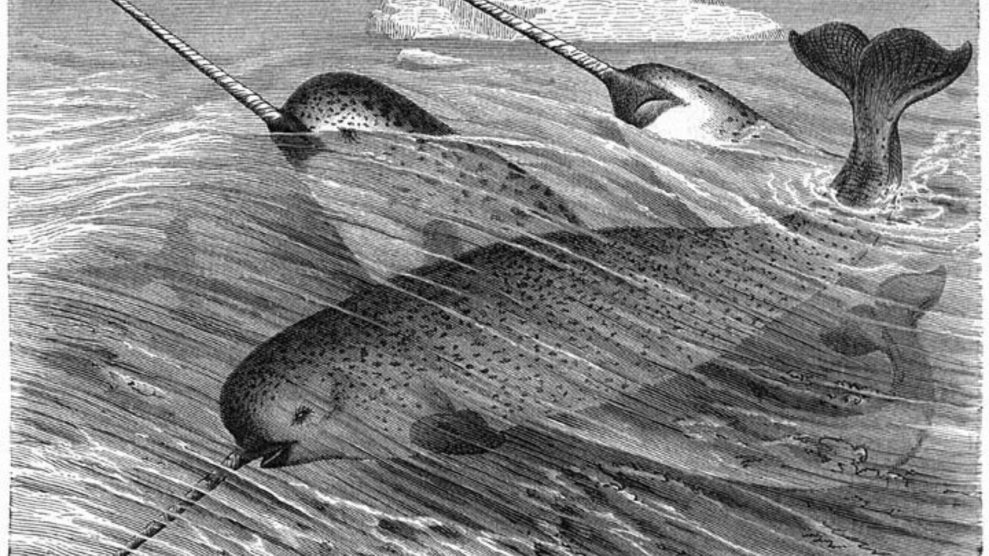 Narwhals are sometimes called the “unicorns of the sea.” Like their fictional equine counterparts, narwhals appear to have a horn or tusk—it actually functions more like a tooth—galloping straight out of their heads. Over the centuries, narwhals swam through the realm of folklore, figuring especially prominently in Inuit tales. They also float amid not-quite-truths: In the 16th century, naturalists depicted narwhals as something like razor-toothed alligators with saws erupting through their skulls. One described the whale as “a sea-monster that has in its brow a very large horn wherewith it can pierce and wreck vessels and destroy many men.”

Unlike unicorns, narwhals occupy space in the real world. The whales mostly congregate in Arctic waters around Greenland, Russia, and northern Canada, where they’re known to dive nearly a mile deep, and surface for air in between fractured ice. But today, their landscape is changing.

In recent years, as their native waters have warmed and ice cover has shrunk, ship traffic has increased in the region. A handful of countries, including the United States, are “racing to put icebreakers into Arctic waters as rising temperatures uncover new shipping routes, resource deposits, and fishing areas,” as Scientific American reported. In one area where narwhals spend their summers, ship traffic surged by 300 percentbetween 2015 and 2016 alone.

Narwhals haven’t been in dire straits—last year, the International Union for Conservation of Nature downgraded their status from “near threatened” to “least concern”—but shipping traffic could be bad news for these wondrous whales, according to a recent report published in the Proceedings of the National Academy of Sciences. Researchers from the University of Washington and the University of Alaska Fairbanks estimated how vulnerable 80 populations of marine animals are to ship traffic that passes through in September, the month when melted ice yields the most open water. More than half of these populations are exposed to ship traffic, the authors found, and narwhals most of all.

“Narwhals have all the traits that make them vulnerable to vessel disturbances—they stick to really specific areas, they’re pretty inflexible in where they spend the summer, they live in only about a quarter of the Arctic, and they’re smack dab in the middle of shipping routes,” said study co-author Kristin Laidre, a polar scientist at the University of Washington’s Applied Physics Laboratory’s Polar Science Center, in a statement. Since the whales communicate underwater, use sound to navigate, and are “notoriously skittish and sensitive to any kind of disturbance,” Laidre said, they’re also susceptible to being troubled by the noises emanating from ships.

The authors surmised that beluga whales, walruses, and other mammals that hug shipping routes are also vulnerable. Less so for polar bears and roving groups of seals. The researchers found that the risks were especially pronounced in narrow segments of shipping routes—so-called “geographic bottlenecks” such as Lancaster Sound, in Nunavut, and the Bering Strait.

Despite those centuries-old warnings, narwhals aren’t preying on ships, or ramming their crews. But, in a sense, the danger is flowing the other way—at least for now. The Bering Strait and other “pinch points” represent “potentially high conflict areas,” the authors wrote, “but also opportunities for conservation-informed planning” if researchers gather more data about these unusual whales’ dark, deep world.