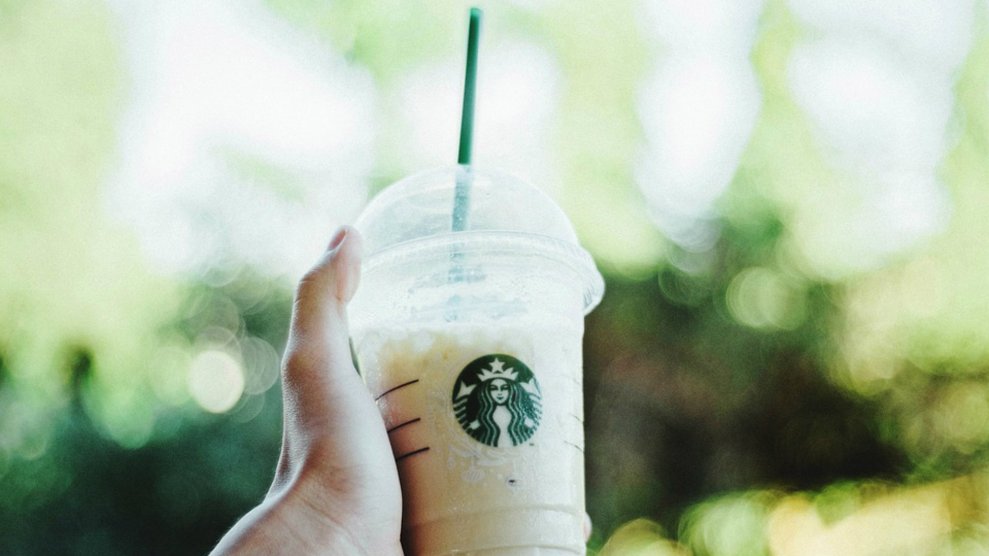 To have an honest conversation about the ocean plastics crisis, one must accept two hard truths. The first is that the situation is dire: Every year, more than 8 million metric tons of plastic waste gets lost at sea, where it breaks down into microplastics that kill marine life. The second is that solving the problem will be very difficult. We could get rid of all the plastic straws in the world, and we still wouldn’t be anywhere near out of the woods.

That latter point is why some have scoffed at Starbucks’s Monday announcement that it will phase out plastic straws in its 28,000 stores around the world by 2020. Within a year and and a half, the company said, its plastic straws would be replaced with sippy cup-like lids—which, yes, will also be made of plastic. The drinks that currently come with straws, like iced coffees and frappuccinos, will still be served in plastic cups. “So what are we celebrating exactly?” tweeted science journalist Erin Biba. “Putting a bandaid on a gaping wound and patting ourselves on the back.”

“So what are we celebrating exactly? Putting a bandaid on a gaping wound and patting ourselves on the back.”

Supporters of Starbucks’s plan acknowledge it’s not a perfect solution. “Clearly we need more and bigger commitments from companies that are literally handing us tons of plastics every day,” said Jacqueline Savitz, the chief policy officer at environmental non-profit Oceana. But you have to start somewhere, she said. Why not do so with a product that most people don’t actually need? (Some disabled people may need straws, but Starbucks said it will still have paper straws and biodegradable plastic straws on hand if people request them.)

Straw phase-outs aren’t totally insignificant when it comes to reducing pollution. Along with plastic stirrers, single-use plastic straws make up 7 percent of all plastic trash in the environment (land and sea), and about 4 percent of all ocean plastics. “We find them prominently during big beach cleanups,” said Jackie Nuñez, founder of The Last Plastic Straw. “And even though they’re a small percentage of what’s in the ocean, they’re still in the ocean doing harm.” Consider the sea turtle in the 2015 viral video that catalyzed the anti-straw movement: It hisses and gasps as marine biologists spend eight excruciating minutes prying a straw from its bloody nostril.

It’s true that Starbucks alone can’t make much of dent. The company says its move will eliminate about one billion plastic straws per year, whereas Americans probably use tens if not hundreds of million straws per day. (Reliable estimates are hard to come by.) A bigger dent could be made if other food and beverage chains followed Starbucks’ lead. McDonald’s, for example, uses an estimated 36 billion straws every year, according to the consumer advocacy group SumOfUs. That company has taken a small step in Starbucks’ direction, by replacing plastic straws with paper straws in about 1,300 restaurants in the United Kingdom and Ireland. But those plans were spurred by government regulations banning single-use plastics. In places without such laws, McDonald’s isn’t expected to phase out straws anytime soon. “There isn’t currently a viable alternative that’s nonplastic at the moment, at the scale we need,” the company’s CEO said.

“The significance of the lid is that now you’ve got one item instead of two, formed in a shape that could potentially be recycled.”

The fact that Starbucks is replacing its plastic straws with denser plastic lids has also spurred concerns that the company is still using roughly same amount of plastic in its packaging, if not more. But Starbucks has argued that its new lids will be much easier to recycle than plastic straws. “By nature, the straw isn’t recyclable and the lid is, so we feel this decision is more sustainable and more socially responsible,” Starbucks’ director of packaging sourcing said in a statement. As Sam Athey, a plastics pollution researcher, explained to the The New York Times, “Plastic straws are pretty small and lightweight, so when they’re going through the mechanical sorter, they’re often lost or diverted.” And once straws slip through the cracks and get into the environment, it takes about 200 years for them to break down. “The straw was never recyclable,” Nuñez said. “The significance of the lid is that now you’ve got one item instead of two, formed in a shape that could potentially be recycled.”

The key word is “potentially”: Most recyclable plastic is never actually recycled. “The global recycling rate is less than 10 percent for plastic,” said Julie Andersen, the global executive director of Plastic Oceans Foundation. And the biggest flows of plastic into the oceans are coming not from America, but Southeast Asia and India, where cities don’t have robust trash and recycling systems. That’s why many ocean cleanup advocates say inadequate waste management, not the widespread use of plastic, is the biggest obstacle to preventing ocean plastic pollution.

But advocates also say companies like Starbucks share a responsibility, with governments, to improve recycling practices around the world. “All industries should be accountable for the plastic waste they create,” Andersen said. In Germany, for example, a whopping 65 percent of waste is recycled—and that’s partially because companies that sell plastic products must pay into the recycling system for the amount of plastic they put out. “As soon as [Germany] did that, the industry came up with ways to reduce the plastic they were producing,” Andersen said. “Personally,” she added, “I’ve never been to a Starbucks where they have a big recycling bin.” (Starbucks reportedly has front-of-store recycling in 50 percent of its company-owned stores.)

But changing laws, and encouraging corporate responsibility, require public buy-in. That, advocates say, is the real benefit of plastic straw bans. “I picked straws as my focus because it’s really a simple, tangible thing—but also the symbol of our bigger problem, this disposable culture,” Nuñez said. “What’s most important is that now, everyone is talking about plastic. And the straw is the key that opens the room.”