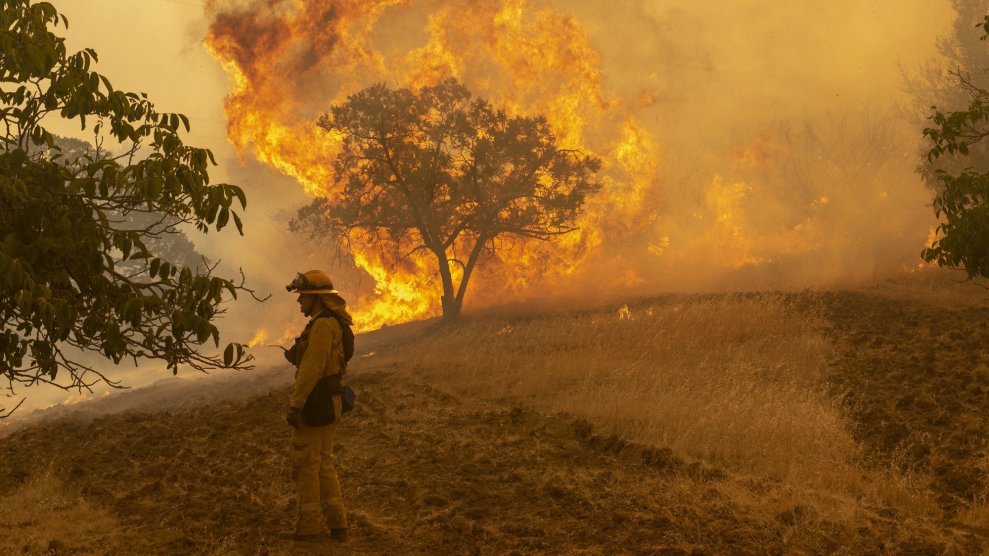 Subtract out the conspiracists and the willfully ignorant and the argument marshaled by skeptics against global warming, roughly restated, assumes that scientists vastly overstate the consequences of pumping greenhouse gases into Earth’s atmosphere. Uncertainties in their calculations, the skeptics say, make it impossible to determine with confidence how bad the future was going to be. The sour irony of that muttonheaded resistance to data is that, after four decades of being wrong, those people are almost right.

As of July 31, more than 25,000 firefighters are committed to 140 wildfires across the United States—over a million acres aflame. Eight people are dead in California, tens of thousands evacuated, smoke and pyroclastic clouds are visible from space. And all any fire scientist knows for sure is, it only gets worse from here. How much worse? Where? For whom? Experience can’t tell them. The scientists actually are uncertain.

Scientists who help policymakers plan for the future used to make an assumption. They called it stationarity, and the idea was that the extremes of environmental systems—rainfall, river levels, hurricane strength, wildfire damage—obeyed prior constraints. The past was prologue. Climate change has turned that assumption to ash. The fires burning across the western United States (and in Europe) prove that “stationarity is dead,” as a team of researchers (controversially) wrote in the journal Science a decade ago. They were talking about water; now it’s true for fire.

“”On top of that is interaction between the climate system, the ecosystem, and how we manage our land use. That intersection is very complex, and even more difficult to predict.

“We can no longer use the observed past as a guide. There’s no stable system that generates a measurable probability of events to use the past record to plan for the future,” says LeRoy Westerling, a management professor who studies wildfires at UC Merced. “Now we have to use physics and complex interactions to project how things could change.”

Wildfires were always part of a complex system. Climate change—carbon dioxide and other greenhouse gases raising the overall temperature of the planet—added to the complexity. The implications of that will play out for millennia. “On top of that is interaction between the climate system, the ecosystem, and how we manage our land use,” Westerling says. “That intersection is very complex, and even more difficult to predict. When I say there’s no new normal, I mean it. The climate will be changing with probably an accelerating pace for the rest of the lives of everyone who is alive today.”

That’s not to say there’s nothing more to learn or do. To the contrary, more data on fire behavior will help researchers build models of what might happen. They’ll look at how best to handle “fuel management,” or the removal of flammable plant matter desiccated by climate change-powered heat waves and drought. More research will help with how to build less flammable buildings, and to identify places where buildings maybe shouldn’t be in the first place. Of course, that all presumes policymakers will listen and act. They haven’t yet. “People talk about ‘resilience,’ they talk about ‘hardening,'” Westerling says. “But we’ve been talking about climate change and risks like wildfire for decades now and haven’t made a whole lot of headway outside of the scientific and management communities.”

It’s true. At least two decades ago—perhaps as long as a century—fire researchers were warning that increasing atmospheric CO2 would mean bigger wildfires. History confirmed at least the latter hypothesis; using data like fire scars and tree ring sizes, researchers have shown that before Europeans came to North America, fires were relatively frequent but relatively small, and indigenous people like the Pueblo used lots of wood for fuel and small-diameter trees for construction. When the Spaniards arrived, spreading disease and forcing people out of their villages, the population crashed by perhaps as much as 90 percent and the forests went back to their natural fire pattern—less frequent, low intensity, and widespread. By the late 19th century, the land changed to livestock grazing and its users had no tolerance for fire at all.

“So in the late 20th and early 21st century, with these hot droughts, fires are ripping now with a severity and ferocity that’s unprecedented,” says Tom Swetnam, a dendrochronologist who did a lot of that tree-ring work. A fire in the Jemez Mountains Swetnam studies burned 40,000 acres in 12 hours, a “horizontal roll vortex fire” that had two wind-driven counter-rotating vortices of flame. “That thing left a canopy hole with no trees over 30,000 acres. A giant hole with no trees,” he says. “There’s no archaeological evidence of that happening in at least 500 years.”

Swetnam actually lives in a fire-prone landscape in New Mexico—right in the proverbial wildland-urban interface, as he says. He knows it’s more dangerous than ever. “It’s sad. It’s worrying. Many of us have been predicting that we were going to see these kinds of events if the temperature continued to rise,” Swetnam says. “We’re seeing our scariest predictions coming true.”

Fire researchers have been hollering about the potential consequences for fires of climate change combined with land use for at least as long as hurricane and flood researchers have been doing the same. It hasn’t kept people from building houses on the Houston floodplain and constructing poorly-planned levees along the Mississippi, and it hasn’t kept people from building houses up next to forest and letting undergrowth and small trees clump together—all while temperatures rise.

“Some of the fires are unusual, but the reason it seems more unusual is that there are people around to see it—fire whorls, large vortices, there are plenty of examples of those,” says Mark Finney, a research forester with the US Forest Service. “But some things are changing.” Drought and temperature are worse. Sprawl is worse. “The worst fires haven’t happened yet,” Finney says. “The Sierra Nevada is primed for this kind of thing, and those kinds of fires would be truly unprecedented for those kinds of ecosystems in the past thousands of years.”

So what happens next? The Ponderosa and Jeffrey pine forests of the west burn, and then don’t come back? They convert to grassland? That hasn’t happened in thousands of years where the Giant Sequoia grow. So … install sprinklers in Sequoia National Forest? “I’m only the latest generation to be frustrated,” Finney says. “At least two, maybe three generations before me experienced exactly the same frustration.” Nobody listened to them, either. And now the latest generation isn’t really sure what’s going to happen next.