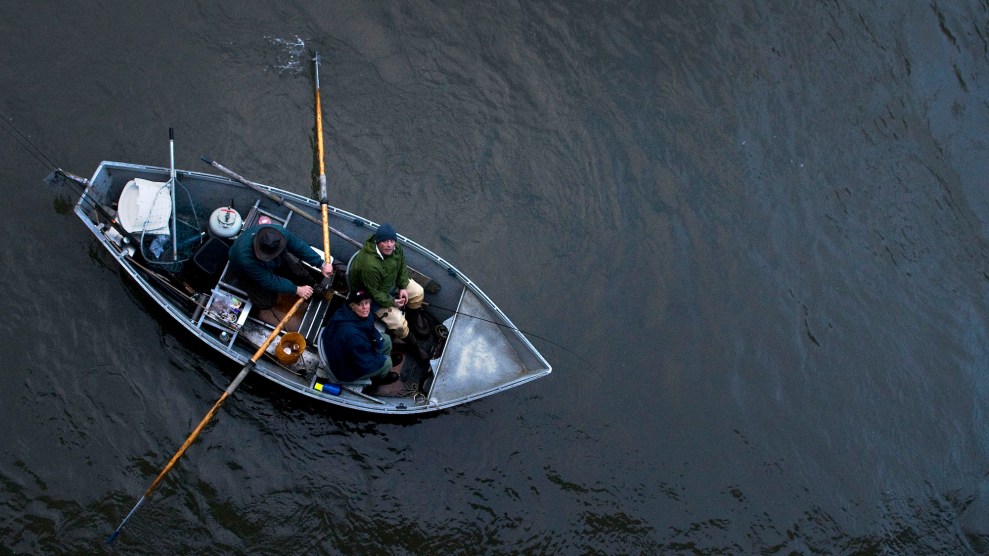 People fish for steelhead in the Grand Ronde River.ed Conklin/ZUMApress.com

What the farm bill is to terrestrial food production, the fish bill, a.k.a. the Magnuson-Stevens Act, is to the ocean—the law that governs America’s marine fisheries. First passed in 1976 to kick foreign fishing fleets out of American waters, the MSA has evolved into one of the nation’s most effective conservation laws. A reauthorization in 1996 required managers to place all overfished stocks on strict rebuilding timelines, and another in 2006 mandated hard limits on total catches. Those science-based provisions have recovered 44 once-depleted stocks, from the canary rockfish to the barndoor skate.

The bill could “undercut the important role science plays in management decisions.”

But not everyone thinks the fish bill is still fresh. Rep. Don Young, an Alaska Republican, has long argued that its rules against overfishing hurt coastal economies. On July 11, the House passed H.R. 200, the Strengthening Fishing Communities and Increasing Flexibility in Fisheries Management Act, mostly along party lines. The reauthorization, claimed Young, who sponsored the bill, would strike “a proper balance between the biological needs of fish stocks and the economic needs of fishermen.”

Environmentalists see it differently. By weakening the very stipulations that have made Magnuson-Stevens so effective, cautioned Ted Morton, oceans director at the Pew Charitable Trusts, the bill could “undercut the important role science plays in management decisions” and increase overfishing. Rep. Jared Huffman, a California Democrat, dubbed Young’s legislation the Empty Oceans Act.

As the fish bill heads to the Senate—where Dan Sullivan, Young’s fellow Alaska Republican, will likely try to squeeze through companion legislation before midterms rearrange the political landscape—we wanted to unpack H.R. 200’s most consequential changes.

The Magnuson-Stevens Act draws its strength from its specificity: The timeline for rebuilding any overfished stock has to “be as short as possible” and “must not exceed 10 years.” Those requirements have produced impressive results. Take lingcod, a toothy Pacific bottom-dweller whose population crashed in the 1990s. Regulators implemented a 10-year rebuilding plan that slashed allowable catches, protected small lingcod, and shut down the fishery for half the year. By 2005—four years ahead of schedule—the species had bounced back.

H.R. 200 would grant fishery managers what scientists have called “get out of jail free cards” to continue overfishing. Rather than rebuilding stocks as fast as possible, for instance, the new law would let regional management councils rehabilitate them as fast as practicable, a subtle but important tweak that could lead to looser regulation. The bill also allows managers to slow the pace of rebuilding stocks when undefined “unusual events”—think hurricanes, oil spills, or El Niños—affect fish populations and threaten to inflict “significant economic harm to communities.” The upshot: Severely depleted but economically important stocks like Gulf of Maine cod could remain subject to overfishing, further delaying recovery.

Many marine ecosystems are built on forage fish—small, silvery schoolers like sardines, herring, sand lance, and squid. These so-called baitfish feed the large carnivores, like tuna, that we Americans prefer to eat, and in some cases have significant commercial value themselves. Although scientists increasingly emphasize caution in managing forage fish, H.R. 200 allows regulators to lift all catch limits for short-lived species like market squid, the most valuable fishery in California. The bill also removes limits on “ecosystem-component species,” baitfish that aren’t major commercial targets but still have immense ecological value for ocean food webs.

One of the world’s trendiest—and most controversial—management systems is “catch shares,” essentially a cap-and-trade program for fish. Managers determine a total catch and allocate portions of that total to fishermen, who are typically free to sell, rent, or trade their slices of the pie. Although catch shares can make a risky industry safer and more profitable, the system sometimes exacerbates inequality. In New England, most notoriously, a mogul known as “the Codfather” racked up shares, squeezed out small-scale fishermen, and used his vertically integrated empire to commit massive fraud.

In response to such concerns, Young’s bill would make it harder for managers along the Atlantic Coast and the Gulf of Mexico to implement catch-shares systems, by requiring any new program to be approved by a majority of fishermen.

Catching up with recreation

As the recreational fishing lobby’s membership has grown, so has its political might. Groups like the Recreational Fishing Alliance are particularly focused on the Gulf of Mexico, where anglers have sparred with their commercial counterparts over red snapper distribution. Young’s bill contains several nods to this well-heeled lobby, most notably a provision that requires Gulf managers to revisit the “fairness and equitability of all current allocations”—an assessment, commercial fishermen fear, that will grant the recreational sector a larger cut of the total catch. Other provisions call for new data-collection technologies, like online portals and smartphone apps, to better quantify the impact of America’s weekend warriors.

For three decades, invasive lionfish have swum amok over Florida’s reefs, gobbling up native fish and radiating throughout the Caribbean and the Gulf of Mexico and along the Eastern Seaboard. Although scientists have attempted to control the invasion by deploying everything from robotic vacuums to trained sharks, the problem has only gotten worse. The Reef Assassin Act, tacked on to H.R. 200 by Rep. Matt Gaetz, a Florida Republican, would slap a bounty on the invaders. For every 100 lionfish tails a fisherman turns in, he would earn a special tag allowing him to harvest a coveted fish like red snapper, amberjack, or grouper.

While that sounds pretty conservation-friendly, there’s a catch. According to Gaetz’s addendum, the tags could be applied outside of regular fishing seasons, and they don’t count against total catch limits—making even this seemingly benign program something of a giveaway to the recreational lobby. Still, if you’re looking for a bipartisan consensus on fisheries management, a lionfish control program isn’t a bad place to start.