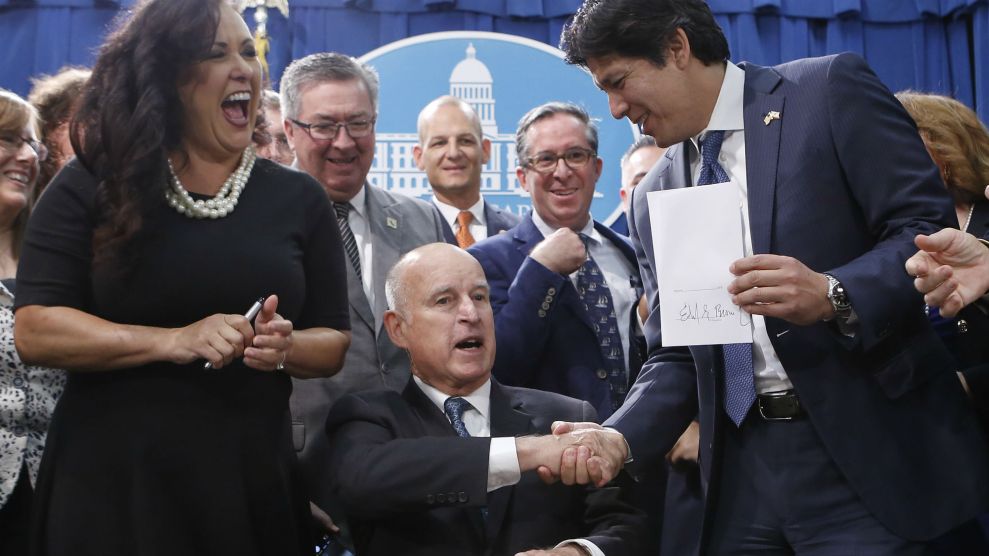 On Monday, California Gov. Jerry Brown signed into law SB100—which aims to make the state’s electricity supply totally emissions-free by 2045. Brown also issued an executive order on Monday instructing California to achieve carbon neutrality (having a zero-carbon footprint) by the same year. The actions came just ahead of the Global Climate Action Summit, a world-wide conference on climate change to be held in San Francisco this week.

“This bill and the executive order put California on a path to meet the goals of Paris and beyond,”  Brown said Monday in a press release. “It will not be easy. It will not be immediate. But it must be done.”

As Mother Jones wrote in August, when the bill passed the state Assembly:

The bill would amend California’s Renewable Portfolio Standard, which currently requires half of all the state’s electricity to come from clean, renewable sources of energy by 2030. Regulators have already predicted the state will meet that goal 10 years early, by 2020.

Although Hawaii was the first state to commit to a 100 percent renewable portfolio last year, California’s decision to go green would likely have much bigger implications. The most populous state in the country and with the world’s fifth largest economy, the Golden State could provide a model for others to follow. And, as MIT Technology Review reports, with the move, “California is effectively acting as a testbed for what’s technically achievable, providing a massive market for the rollout of clean-energy technologies and building a body of knowledge that other states and nations can leverage, says Severin Borenstein, an energy economist at the University of California, Berkeley.”

“In California, Democrats and Republicans know climate change is real, it’s affecting our lives right now, and unless we take action immediately—it may become irreversible,” said state Senator de León, who authored the bill. “Today, with Governor Brown’s support, California sent a message to the rest of the world that we are taking the future into our own hands; refusing to be the victims of its uncertainty.”

The Golden State has long led the county in pushing for renewable energy. As a member of the U.S. Climate Alliance, a coalition of 17 governors from states including Washington, Oregon, Colorado, and New York, California has committed to meeting the goals set out in the Paris Climate Agreement, despite President Donald Trump’s decision to leave the pact.