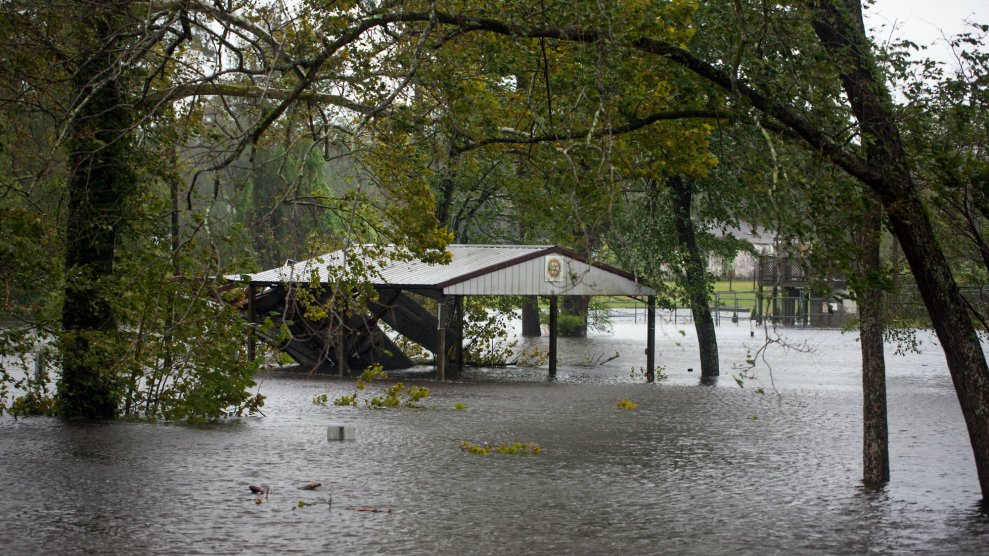 Flood waters from the Trent River inundate a park in Pollocksville, North Carolina after Hurricane Florence made landfall on September 14. Logan Cyrus/AFP/Getty Images

Hurricane Florence made landfall in North Carolina Friday, significantly raising sea levels in the Outer Banks and creating a “life-threatening inland flood hazard” across the region. The storm’s top wind speeds have trailed off since Tuesday, reducing the hurricane to a Category 1 storm, but meteorologists and weather experts foresee potential for catastrophic flooding given the storm’s slow forward motion.

Even in a weakened form, however, Florence will pack a devastating punch. And there’s one major reason for that.

A study released this week by scientists at Stony Brook University, the Lawrence Berkeley National Laboratory, and the National Center for Atmospheric Research attempted to estimate the precise impact climate change has had on Florence’s flooding potential. “Rainfall will be significantly increased by over 50% in the heaviest precipitating parts of the storm,” the authors conclude.

The researchers produced two models of Florence’s path. One was based on NOAA’s actual projection of its path, while the other calculated humidity, air temperature, and sea surface heat figures to match “a world without human induced global warming.”

“The idea we can’t attribute individual events to climate change is out of date, it’s just no longer true.”

Attribution studies, which retroactively documents the impact of global warning on extreme weather events,have been in vogue for at least the past five years, but Stony Brook researchers released their analysis before the storm even made landfall. “The idea we can’t attribute individual events to climate change is out of date, it’s just no longer true,” coauthor Michael F. Wehner told the Guardian. “We’ve reached the point where we can say this confidently.”

The Stony Brook study has not yet been peer reviewed, but its findings generally adhere to the scientific consensus that warmer weather generates heavier amounts of rainfall. A peer-reviewed study published in Geophysical Research Letters, co-authored by Wehner, used observational data to conclude that climate change boosted Hurricane Harvey’s rainfall totals by 38% in the “most affected areas of Houston.” Other attribution studies have said climate change “tripled” the amount of rainfall caused by Harvey, which devastated the Houston region and indirectly caused a series of environmental disasters.

Florence is expected to dump historic amounts of rain during its path on land because of record-high surface temperatures off the coast of North Carolina and the hurricane’s own slow motion. Typically, the dramatic contrast between temperatures in the Arctic and the tropics help to orient a hurricane’s path. But with the poles growing warmer, the contrast is less extreme, which means the steering current of hurricanes slows down and the storms become less horizontally mobile. The forward motion of tropical cyclones has slowed by 10% since 1949, according to a study published in June by University of Wisconsin hurricane scientist Jim Kossin. “These trends have almost certainly increased local rainfall totals in these regions,” he concluded.

On Friday morning, the National Hurricane Center reported water levels seven feet above normal on Emerald Isle, North Carolina, just miles away from where Florence made landfall at Wilmington. At other sites along the hurricane’s path, like New Bern, water levels were at their highest point in the past century, according to Slate. More than 1 million residents were instructed to evacuate from their homes, including service members on several military bases. At least four people have died so far due to the storm.

Scientists have been less conclusive at drawing a link between hurricane size and climate change. The Stony Brook study projected Florence to be 80 kilometers larger in the model that incorporates the impact of climate change, but not all scientists have observed this nor has it been necessarily linked to a warming planet. Jeff Masters, the co-founder of forecasting service Weather Underground, describes the research focused on this as “conflicting.”

Under President Donald Trump, the Federal Emergency Management Agency has avoided mentioning the impact of climate change at all. In its 2018-2022 Strategic Plan, the agency does not even mention the word “climate,” let alone the impact of global warming. “The term climate change has become such a political hot button that I think it keeps us from having a real dialogue,” FEMA Administrator William “Brock” Long told Bloomberg last August. Craig Fugate, FEMA’s top official during the Obama administration, obliquely questioned this approach during an October event sponsored by the left-leaning Center for American Progress. In a discussion about Obama’s response to Hurricane Sandy, he explained how the president urged him to focus on “climate adaptation” so the country could “build to future risk.”