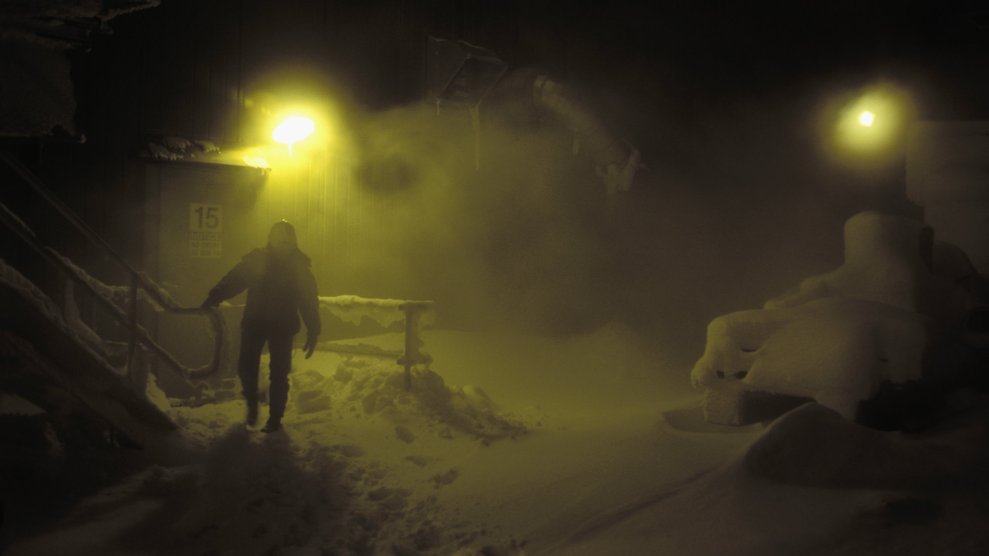 A drilling facility atop the frozen Beaufort Sea. Karen Kasmauski/Corbis via Getty Images

Plans to establish the first oil drilling operation in US Arctic waters have hit an ironic snag—a lack of sea ice caused by rapid warming in the region.

Last month, the Trump administration approved the go-ahead of the Liberty project to extract oil from beneath the Beaufort Sea, off Alaska’s north coast. The drilling would be the first of its kind in federal waters in the Arctic and follows Trump’s reversal of an Obama-era ban on fossil fuel activity in the polar region.

But in order to get to the oil, Hilcorp Energy, the Texas-based company behind the project, has to construct a temporary gravel island about five miles offshore so it can drill in shallow water.

“Opening the Arctic to offshore oil drilling is a disaster waiting to happen.”

This nine-acre structure requires an expanse of landfast sea ice, or ice that forms each winter and attaches to the coast, which would then be covered in gravel and then concrete. However, a recent lack of shoreline ice has complicated Hilcorp’s plan to extract up to 70,000 barrels of oil a day, totaling around 150m barrels over two decades, from the site.

A spokesman for the Bureau of Ocean Energy Management, which oversees offshore leasing, said Hilcorp originally forecast it would take a year to construct the island. But this plan has now been revised due to thinning sea ice, as first reported by Alaska Public Media.

“To safely transport gravel offshore in the Arctic, the ice along the route of the ice road must be of adequate thickness,” the BOEM spokesman said. “Over the last few years, that thickness has not developed until unusually late in the season.”

Hilcorp has now added another year to its timeline to get the drilling island completed, he said. Construction is set to start in 2020.

Climate change driven by the burning of fossil fuels is causing the planet to warm, with the Arctic heating up twice as quickly as the global average. The region experienced its warmest winter on record earlier this year, with scientists and local communities reporting an unusually late freeze-over of the Arctic ocean.

The Arctic contains year-round ice as well as fluctuating seasonal ice, which Hilcorp is relying upon for its drilling operation. In September, NASA reported the annual minimum sea ice extent was the sixth lowest on record, with the Arctic sea ice area declining by about 13 percent a decade.

“A number of studies have shown that landfast ice is forming later and breaking up earlier each year,” said Andy Mahoney, an assistant research professor in geophysics at the University of Alaska.

Mahoney said businesses like Hilcorp that rely upon shoreline ice for drilling platforms will likely face “significant challenges as the growing season shorten”, with the melting of permafrost and coastal erosion also hampering projects.

The Trump administration has opened up virtually all federal waters, including the Arctic, for oil and gas drilling leases, as part of what the president has called an “US energy dominance” strategy.

Environmentalists have decried plans to drill in the Arctic, pointing out that fossil fuel use needs to sharply decline if the world is to avoid dangerous climate change and raising the specter of a potentially disastrous oil spill.

“Opening the Arctic to offshore oil drilling is a disaster waiting to happen,” said Kristen Monsell, ocean legal director with the Center for Biological Diversity. “This project sets us down a dangerous path of destroying the Arctic. An oil spill in the Arctic would be impossible to clean up and the region is already stressed by climate change.”