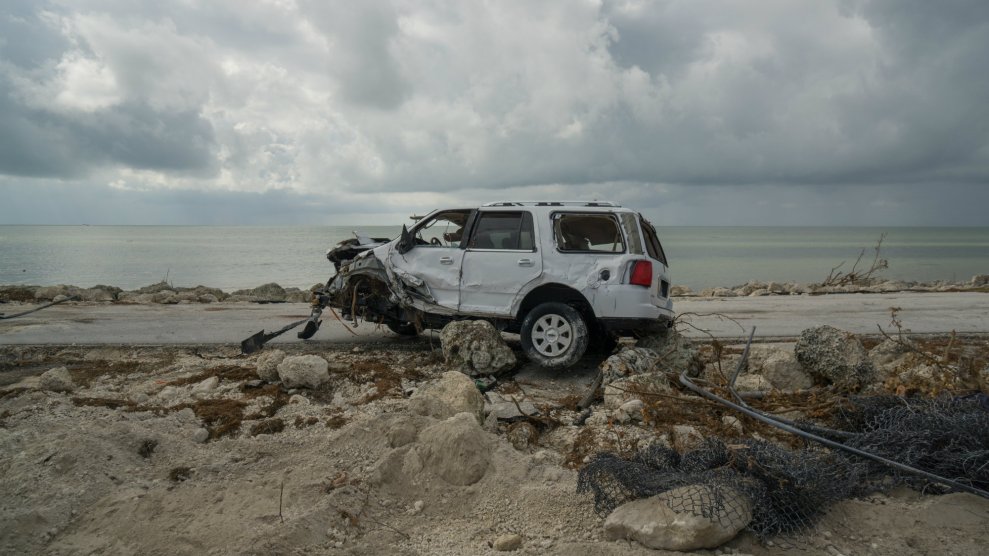 The big question of climate change is no longer why it’s happening (humans have a wild fossil-fuel-burning habit), nor when it’s going to happen (it is happening). These days, it’s how are we going to build a civilization that can survive climate change—and how can we adapt in a way that doesn’t leave out whole segments of the population.

The most recent National Climate Assessment report covered those measurable and model-able variables in detail. It also offered guidance on how to avert the worst a heated climate could bring. But there was much less on that big, outstanding adaptation question.

The Intergovernmental Panel on Climate Change report—the scary global climate update from October—devoted a large portion of a chapter to that riddle. The gist: Adapting to a climate-changed world would be much easier if we had equitable public institutions, like access to health care, social safety nets, and schooling. And a critical task to achieving that equity is increasing the status of women globally—through better education, economic opportunities, and access to reproductive health care.

The United States has a lot of work to do on the equity front, period. The World Economic Forum’s Inclusive Development Index, for example, showed that as the United States’ GDP advances, its uneven access to health care, education, and economic opportunity places it far behind every other advanced economy in terms of equality. If you’re strictly looking at income inequality, the United States is closer to developing countries in Africa and Latin America than to its developed peers.

Meanwhile, the status of reproductive rights in the United States is increasingly under fire. In the most recent midterm elections, Alabama and West Virginia voters passed initiatives that could ban abortion in those states. President Donald Trump has promised to support employers’ religious exemptions from providing no-cost birth control to their employees under their health insurance plans. And the Supreme Court is now more inclined to overturn Roe v. Wade than it’s been since that case was decided.

Connecting reproductive rights and climate change can be fraught, to say the least. The two are often linked through the controversial idea of population control—for good reason, because there’s a long history of support for it in the environmental movement. So if you’re intending to include discussion of strong reproductive rights in a formal policy recommendation, for example, “it has to be given adequate space so that you can provide this more complex explanation that doesn’t trigger people into thinking you’re talking about forced contraception or China’s one-child policy,” says Diana Liverman, one of the lead authors of the IPCC report’s adaptation chapter and an editor of the recent US climate assessment.

“It has to be given adequate space so that you can provide this more complex explanation that doesn’t trigger people into thinking you’re talking about forced contraception or China’s one-child policy.”

There is a mathematical reality about carbon emissions, Liverman adds: More people means more emissions, especially in high-consumption countries like the United States. And since the nation is currently around a replacement fertility rate, she doesn’t agree with addressing reproductive health as a mitigation strategy—one employed to tamp down the severity of climate change. Further, the report didn’t allow room to explore the more nuanced benefits of addressing reproductive rights as climate policy. For the United States, Liverman says, it’s internal migration—when communities are forced to move out of climate-vulnerable areas—that is the main demographic factor that increases the human vulnerabilities of climate change.

However, when it comes to climate adaptation—or living in a world undergoing climate change—reproductive rights are paramount. Michelle Erenberg, cofounder and executive director of Lift Louisiana, a reproductive rights organization in New Orleans, points out that lack of access to reproductive health care services makes women, children, and families generally more vulnerable in a host of different ways, from economic disparities to lack of employment opportunities. If a woman unexpectedly becomes a single mother, for example, her work prospects and income potential suddenly become limited.

And then when an extreme weather event like Hurricane Katrina arrives, the legal barriers to basic things like birth control can become even more daunting. When women were evacuated away from coastal cities to inland rural areas after the 2005 storm, many reported difficulty obtaining contraceptive care, Erenberg explains. Suddenly, women found themselves in a new area, struggling to find a clinic where they could get access to birth control, or in a community where a pharmacist refused to fill a prescription because of religious objection. Others were faced with a series of different, and often unnecessary, health care screenings to get a prescription.

If you have never been a woman who’s tried to get birth control, imagine this: You can no longer depend on the birth control prescription that you originally secured through a series of tests and doctor’s appointments because you left your prescription when you fled your flooded home. Now, you’re in a rural area, and you can’t get an appointment at the overburdened clinic nearby to renew it. Let’s say other nearby clinics were recently shut down due to new restrictions. (That infamously happened in Texas in 2014, and the state has still not recovered.) You’re in a relationship, a condom fails (it can happen!), and you become pregnant. In states with hefty barriers to contraception, an abortion is even harder to come by. You now have to face an unexpected child, which adds significant cost and uncertainty to an already uncertain life situation.

This scenario poses a challenge even to a woman of moderate socioeconomic status, and creates enormous problems for a woman with fewer means.

“All of these policies create these walls and barriers to women through no fault of their own,” Erenberg says. “And it’s taking away their agency.”

She points out it’s no coincidence that in many states, especially in the South and Midwest, restrictive reproductive health policies tend to accompany a lack of preparation for climate change. That only highlights how the adjustment to a climate-changed world is a different challenge for women than it is for men.

“We don’t necessarily see that as a coincidence,” Erenberg says. “We think that it’s really important to consider the policymakers who are both skeptical of climate change and of women’s ability to control their own bodies. These are the same lawmakers on all sides of these issues.”