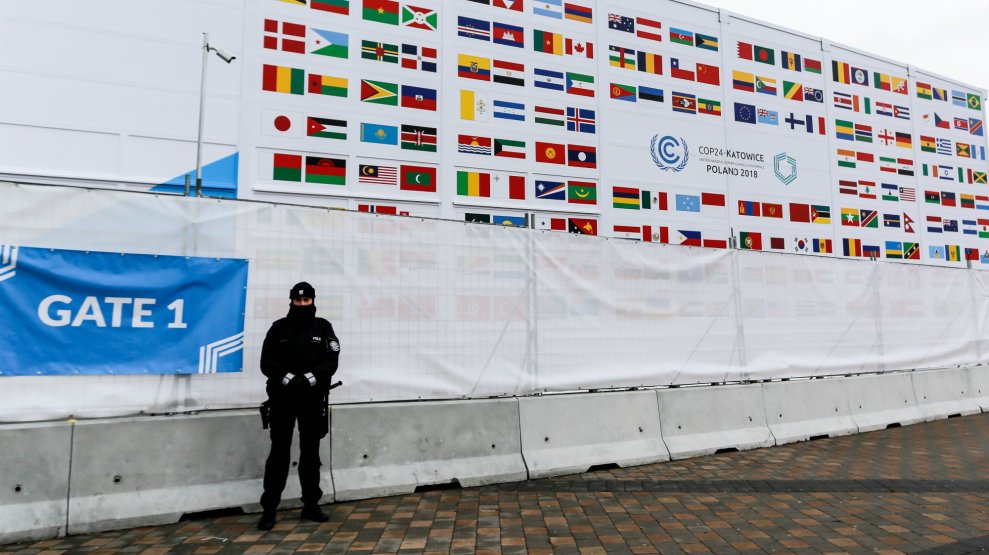 KATOWICE, POLAND—There’s a specter hanging over the COP24 climate talks, that happened last week in the small city of Katowice, Poland. It’s not the goalpost-moving report that the UN’s Intergovernmental Panel on Climate Change released two months ago about the need to limit warming to 2.7 degrees Fahrenheit (instead of 3.6 degrees). It’s not the conspicuous absence of prominent US politicians—with the exception of former California Governor Arnold Schwarzenegger, who parachuted in, Terminator-style, to brag about his four low-emission Hummers. (Wait, what?)

Nope, the cloud over COP24 is coal dust. Literally. Smokestacks and coal plumes are visible from the spaceship-shaped conference center, and the Wujek coal mine is less than three miles away. And if you thought Poland would try to downplay its historical (and, well, current) reliance on coal, you’d be wrong: The booth for the town of Katowice, sitting right next to the official one for all of Poland, proudly touts coal. And not just a little coal—coal made into soap, coal made into earrings and other jewelry, coal under glass, coal in cages—lots and lots of coal.

This is no accident. The host city is in the heart of the Polish region of Silesia, which sits on a lucrative coal deposit. A Katowice native running the booth explained that here everyone has a connection to coal: a family member or friend who has either worked in the mines or supported the industry in some other form. Coal isn’t just an energy source in Katowice — it’s a way of life.

COP24’s president, Michał Kurtyka, a state secretary in Poland’s Ministry of Energy, argued in his opening remarks that bringing the climate summit to Katowice was a strategic decision: to exhibit a city and region in need of transition away from its lifeblood. “How does one tell a region of 5 million people—in over 70 cities across the region—to just move on, your world is that of the past?” he asked the assembled dignitaries.

“How does one tell a region of 5 million people—in over 70 cities across the region—to just move on, your world is that of the past?”

It’s a rhetorical question familiar in the United States, where coal-mining jobs have been on a fairly steady decline since the 1980s. But while coal in the US now makes up 30 percent of electricity generation, thanks largely to falling natural gas prices, in Poland coal still accounts for almost 80 percent. And the government is planning the construction of further plants.

Even as the IPCC declared in its October report that coal must be almost entirely phased out by mid-century to keep average global temperatures from cresting over the 2.7 degrees F mark, Polish President Andrzej Duda has been hesitant to renounce it. “According to experts, we have coal deposits that will last 200 years,” he said at a press conference on Monday. “It would be hard to expect us to give up on it totally.”

Instead, the Polish government is promoting “carbon neutral” ways to have its coal and burn it, too. In a pamphlet handed out at the Polish country booth, the delegation is promoting “forest coal farms,” or tree-planting projects that will “enable the absorbance of even more CO2” from the country’s massive coal installations.

At a press conference, Robert Cyglicki, the director of Greenpeace for central and eastern Europe, was blunt about the scientific reality of such a project. “One coal power plant, Bełchatów, emits more annually than all Polish forests can absorb,” he said of the world’s largest brown coal-burning facility. Yes, forests are great carbon sinks. But they’re no match for all of Poland’s old, dirty coal plants.

And while Poland has started spreading the gospel of coal at COP24, the US is poised to join the chorus. Last year, at COP23 in Bonn, Germany, the Trump administration ran a coal-focused side event that was interrupted by young protestors. This year, it has a similar gathering in the works, and reports say the US delegation is likely to push for coal to be part of any future global energy mix.

Amid the heavy coal boosterism, this year’s conference has brought attention to the plight of workers whose livelihoods will be changed under an energy transformation. France’s recent “yellow vest” protests were in response to an increased fuel tax, and the populism spreading across Europe is omnipresent at COP24.

In Katowice, most delegates are calling for a “just transition”—a switch in energy sources that doesn’t leave society’s most vulnerable behind. Just as Trump has promised to save the coal industry, Poland’s leaders are promising to provide alternative livelihoods for their countrymen currently working in its mines and coal-fired plants.

Piotr Trzaskowski, the Polish organizer of 350.org, says the “just transition” talk in Poland is just that—talk. Coal is king here, and as President Duda suggested, Polish officials aren’t likely to abandon it. “Their vision is making sure it stays, but just tweaking it here and there,” he told Grist.

Meanwhile, attendees representing developing nations may be less concerned about what happens to today’s fossil fuel workers than with the fact that climate change’s worst effects are still on the horizon.

“Small islands feel like the ‘just transition’ conversation is only happening vis a vis workers who might lose their jobs,” explains Anabella Rosemberg, the international program director of Greenpeace. “They say,’ What about us? Yes they will lose jobs, but we are sinking.’ The ‘just transition’ for them is 1.5 degrees C (2.7 degrees F).”

But to even dream of averting 2.7 degrees F will involve phasing out coal—and coal workers’ jobs—fast.