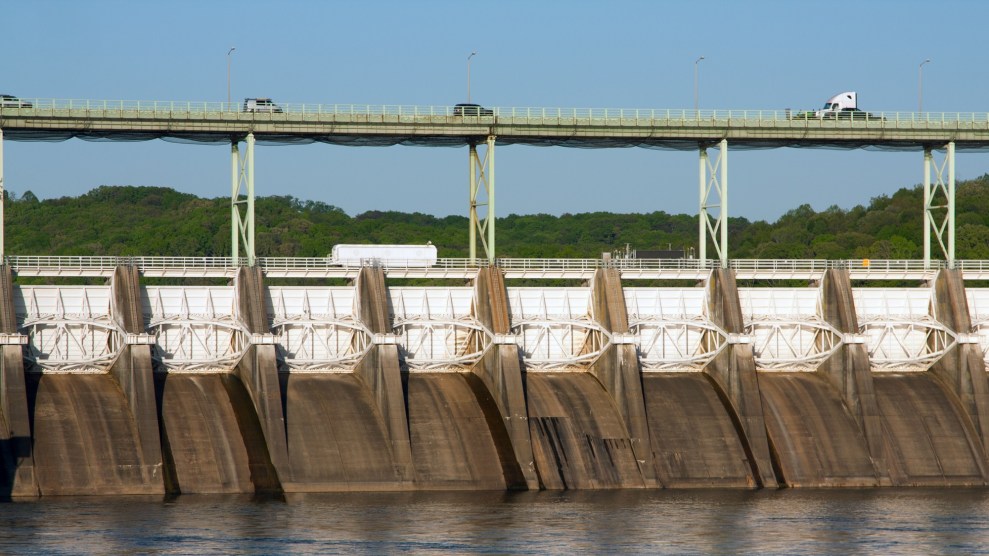 In May 1933, President Franklin D. Roosevelt signed the Tennessee Valley Authority Act establishing the nation’s largest public utility and setting in motion an ambitious New Deal policy to provide electricity and jobs to some of the poorest Americans in the midst of the Great Depression.

Nearly 86 years later, a new proposal aims to sharpen the Tennessee Valley Authority into the speartip of a so-called Green New Deal, a nascent push to radically shrink greenhouse gas emissions and give good-paying clean energy jobs to every American who wants one.

In a 10-page report published Wednesday, the People’s Policy Project, a left-leaning think tank, detailed how tweaks to the law governing the Tennessee Valley Authority could transform the federally owned utility into “a renewable energy juggernaut that pushes at every margin to install as much clean energy capacity as possible across the country.”

The idea comes amid fierce debate over how a patchwork of legislation could culminate in a Green New Deal that mobilizes the entire United States economy to all but end fossil fuel use over the next decade and prepare for the violent storms, droughts and sea-level rise already happening as a result of centuries of burning oil, gas and coal. Zeroing out emissions from the biggest federally owned utility in the country cannot alone comprise a Green New Deal, but it offers a starting point as Democratic lawmakers begin drafting bills.

The TVA declined to comment on the proposal. “As a federal agency, the proposals contained in the report would require Congressional approval,” Scott Fiedler, a spokesman for the agency, said by email. “It would be inappropriate for TVA to speculate or provide comment on Congressional matters.”

Yet the proposal stands out not only as one of the first to repackage aspects of the original New Deal into a new climate-focused one but also as an idea just wonky and specific enough to gain traction at a time when policies like pricing carbon dioxide emissions and subsidizing renewable energy development face criticism.

“What can we do that genuinely does not involve subsidies to private actors or pricing? The only thing that comes to mind is the government needs to have its own power company,” Bruenig said. “We already have one in the TVA, so let’s build off of that.”

The heart of the proposal is a call for 100 percent carbon-free electricity before 2030, the date by which United Nations scientists said the world must halve global emissions or face cataclysmic global warming. But the paper goes beyond that goal, proposing lifting the geographical limitations on the TVA to create what would essentially function as a national power company and suggesting a means by which to pay for what would likely be a costly overhaul.

On the Mother Jones podcast, host Jamilah King speaks with Vien Truong, CEO of advocacy group Green for All, and climate reporter Rebecca Leber to trace the formation of the Green New Deal—from FDR to AOC.

Under Bruenig’s proposal, the TVA would phase out coal and gas plants but would continue to rely heavily on nuclear. That could be a sticking point for environmentalists who see nuclear reactors’ radioactive waste and thirst for cool fresh water as incompatible with their visions of a clean energy future. Earlier this month, 626 environmental groups sent a letter to Congress laying out the policies they believe should be in a Green New Deal and made clear “any definition of renewable energy must also exclude all combustion-based power generation, nuclear, biomass energy, large-scale hydro and waste-to-energy technologies.”

But the extent and the speed of the emission cuts required to keep the planet from warming beyond a catastrophic 2.7 degrees Fahrenheit above pre-industrial levels gives pragmatic appeal to a policy that embraces nonrenewable sources, said Jesse Jenkins, a postdoctoral environmental fellow at Harvard University’s John F. Kennedy School of Government.

“If we consider climate change to be a crisis, as I do and as many advocating a Green New Deal do, we need to be willing to throw all the carbon-free tools that we have on that challenge.”

“I commend the proposal for focusing on carbon and building a carbon-free energy mix for TVA as opposed to a more narrow focus on building out renewable energy,” he said by phone. “If we consider climate change to be a crisis, as I do and as many advocating a Green New Deal do, we need to be willing to throw all the carbon-free tools that we have on that challenge.”

The other pillar of Bruenig’s paper is the proposal to authorize the TVA “to operate all over the country, not just in its current service area” of about 80,000 square miles, encompassing most of Tennessee and parts of Alabama, Mississippi, Kentucky, Virginia, North Carolina and Georgia.

Current rules, put in place in the 1950s, restrict the TVA from operating outside its current coverage area. Bruenig argued that “the TVA should not be more restricted than any of these other electric generation companies,” comparing the utility to the Houston-based investor-owned power giant NRG Energy.

“If you’re NRG and you see an opportunity and say, ‘Hey, there’s a place in Arizona where we could build a solar site or, in Nevada, a wind site,’ they can go out and to that,” Bruenig said. “TVA can’t.”

He added: “Let’s tell it to look for those opportunities, everywhere it can go to try to find places to decarbonize electricity generation. Then leave it open to how that’s going to go.”

That, however, could face some criticism. Greg Carlock, who authored a blueprint for a Green New Deal for the left-leaning think tank Data for Progress last September, said expanding the reach of the TVA could “run counter to empowering local communities to generate their own power” and risk stripping “authority from regional and local power operators and co-ops.”

He pointed to municipalities like Boulder, Colorado, which in 2010 decided to cut ties with Xcel, the Minneapolis-based, investor-owned utility that long supplied its electricity, and form its own public utility in hopes of forging ahead with the city’s climate goals. It’s been a difficult process of the past few years, amounting to what the environmental magazine Grist called a “bad breakup.” But Carlock said that any policy to broaden the TVA’s mandate should consider how sudden competition from the federal government could upset municipal-level plans for public-owned electricity generation.

“We can’t ignore the pitfalls of expanding federal authorities to where it didn’t exist before and ignoring the goals of the justice movement for energy democracy,” he said.

Paying to green the TVA could be one of the least controversial aspects of the proposal. Since 1999, the TVA has been completely self-financed through electricity sales. But it’s one of the few federal agencies with the power to issue its own debt, which it does already to issue so-called “power bonds” and short-term “discount notes.”

The TVA currently has about $23 billion in outstanding debt; it’s capped at $30 billion of debt. Bruenig proposes lifting the cap and backing the bonds up “by the full faith and credit of the federal government.” The risk, he said, is that the TVA would default “if it was managed poorly.”

“Even if it was, you have to balance that risk against climate risks,” Bruenig said. “If the worst-case scenario is the TVA runs itself bankrupt building out clean energy capacity and the U.S. significantly decarbonizes its electricity in the process, and the whole thing goes bankrupt and the federal government has to bail it out, that’s not such a bad outcome if you’ve hopefully reduced the damage of climate change.”

In 2017, the second-hottest year in history, the U.S. suffered a record $306 billion in damages from climate-related disasters. That figure could balloon under a 2.7-degree warming scenario, in which United Nations scientists predict global losses of $54 trillion.

Yet even if the TVA remains focused on its current location and implements a plan to decarbonize its electricity production, the agency could have a huge regional impact. The utility giants that dominate the SoutheastSouthern Company, Duke Energy, Dominion Energy and Florida Power & Light ― “have been some of the last to decarbonize,” said David Pomerantz, executive director of the nonprofit Energy and Policy Institute, which tracks the utility sector.

“Having the TVA in the region pushing a different direction would have a really high impact,” he said. “Thinking about it as part of a Green New Deal is this very golden opportunity to restore the original ethos of the TVA, which is as an economic development and job creation engine for Appalachia.”

Either way, Bruenig said, “at a minimum, you have to do something about the TVA,” whose legacy of a toxic coal ash spill in 2008 left more than 250 workers sick or dying.