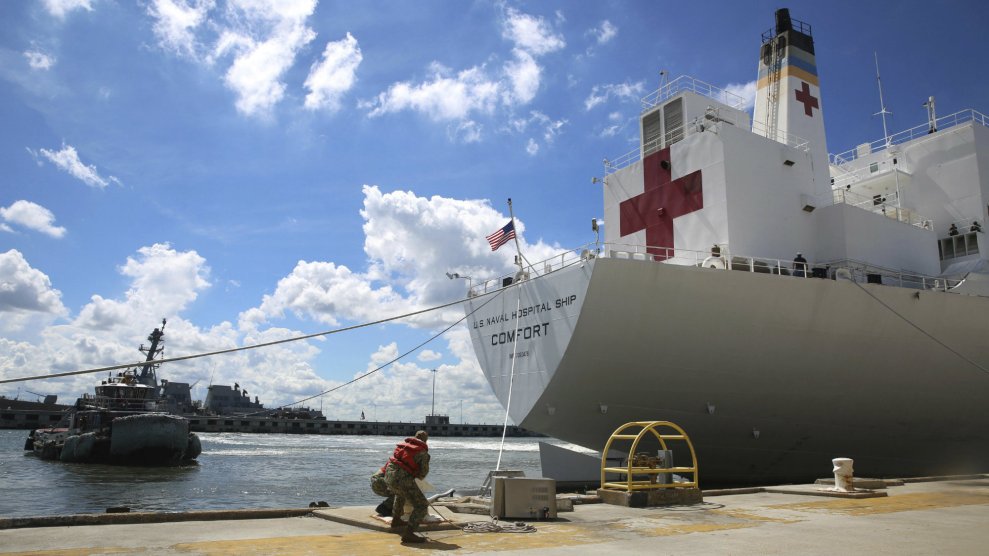 Earlier this month, the Pentagon released a landmark report that identified the 79 American military installations most vulnerable to the “effects of a changing climate.” The 22-page filing frankly acknowledged the security implications of climate change—in dramatic contrast with President Trump’s very public global warming skepticism—but Democrats roundly criticized its failure to include several details requested by Congress, including specific cost estimates to protect or replace the ten most vulnerable bases from each of the military services.

“They clearly ignored the requirement in the law,” says Rep. Jim Langevin (D-RI), one of the signatories, who had described himself as “deeply disappointed” with the original report. “The report they issued was completely unsatisfactory.” Sen. Jack Reed (D-R.I.), the ranking member on the Senate Armed Services panel, said the report carried  “about as much value as a phonebook.” Smith immediately demanded another report that “rigorously confronts the realities of our warming planet.”

Heather Babb, a Defense Department spokesperson, attempted to explain the priorities, saying earlier this month that Pentagon officials “focused on mission assurance” when compiling the report. “By using this alternative approach, we are able to highlight where there are operational risks,” she said. When asked about the new request on Wednesday, Babb said, “As with all congressional correspondence, we will respond directly to [the] authors of the letter.”

What was omitted in the first report that the Pentagon had a year to compile was striking. No Marine Corps installations were mentioned, for example, despite the fact that just four months before the report was released, Hurricane Florence slammed into Camp Lejeune, the Marines’ biggest base on the East Coast, costing more than $3 billion in damages. Omissions from other branches of the military were just as concerning. Tyndall Air Force Base in Florida, where Hurricane Michael devastated 95 percent of the buildings in October, was not included among the Air Force’s most vulnerable bases.

In the summer of 2017, as part of the debate over last year’s annual defense spending bill, Langevin introduced an amendment requesting that the Pentagon assess how best to mitigate climate-related threats across the armed services, down to level of an estimated cost and combatant command requirements. Earlier that year, the Washington Post had reported that defense officials removed nearly two-dozen references to climate change from a draft survey of installations vulnerable to the threat, creating an embarrassing news cycle for the Pentagon.

The amendment was added by voice vote in committee and reaffirmed with bipartisan support on the floor of the House. In July, more than 40 members of Congress, including several Republicans, even wrote to former defense secretary Jim Mattis to remind him of the requirements included in the report. Notably, lawmakers said they had been “disturbed” by the Post story, as if to warn Mattis against inciting a similar firestorm. “We expect that when this report is delivered to Congress later this year, it will contain candid assessments in line with the clear instructions passed by Congress and signed into law by the President,” the letter stated.

The report clearly fell short of its goal in the first version and now, with Democrats in control of the House, Langevin said the Armed Services committee is considering several options in case the Pentagon ignores this new request, from subpoenaing documents to hauling relevant DOD staffers before the panel for testimony. “I hope this doesn’t become a long, dragged-out battle,” he said. At least one major ex-Pentagon official has already voiced his support for a new report. John Conger, the former assistant secretary of defense for energy, installations, and environment, noted in a blog post earlier this month that “DoD should make the transition from anecdote to analysis and provide a fuller assessment, as Congress directed.”

For Shanahan, now in his fifth week leading the Pentagon as Mattis’s acting successor, the challenge from House Democrats poses an important early test of how compliant he will be with Congress. Mattis, who fell out of favor with Trump and ultimately resigned once the president announced that he would withdraw US troops from Syria, had long been viewed as a climate change realist in a Cabinet of deniers and skeptics. Shanahan, whose background had been in weapons acquisition and management as a career executive at Boeing, arrived at the Pentagon as deputy secretary without a history of making his public policy views explicit.

But in the months since he entered government as the number two to Mattis, climate change has risen on the military’s agenda. The recently released annual worldwide threat assessment from the intelligence community even listed global warming as a menace to “low-lying military bases.” The Democrats’ request for a new report can potentially put Shanahan at loggerheads with Congress, which confirmed him as deputy secretary with wide bipartisan support, and Trump, who has indicated that Shanahan could remain acting secretary indefinitely. (A spokesperson for Shanahan was not immediately available for comment.)

Since the early days of the Trump administration, the Pentagon has quietly but firmly adopted a more proactive approach toward climate change in some areas. After years of degradation to shipyards in Virginia, Hawaii, Maine, and other states, the Navy submitted a $21 billion infrastructure plan last year to clear a backlog of maintenance work. Military leaders have also grown more assertive in confronting the possibility of security threats from Russia and China in a warmer Arctic. In the past, reports from the Pentagon and the independent Government Accountability Office have even catalogued the threat to hundreds of installations in the United States and abroad. But the reluctance some officials have shown toward openly contradicting their commander in chief has compromised lawmakers’ confidence in DOD’s willingness to seriously confront the security implications of a warming planet.