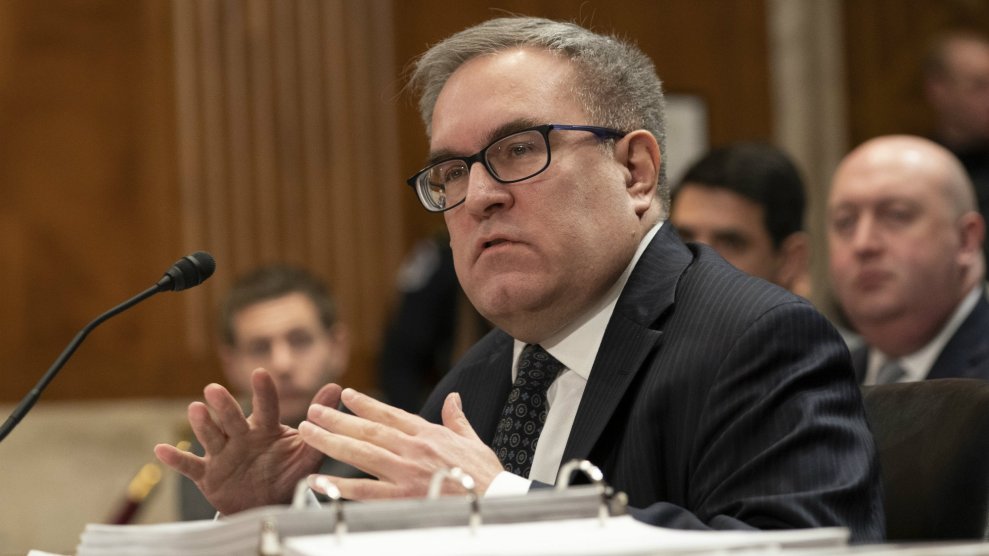 The announcement came six days after Wheeler, the acting EPA administrator and nominee to fill the role permanently, testified before a Senate committee in the first step of what’s expected to be an easy confirmation process to be the nation’s 15th EPA chief.

The timing could be a coincidence, a cost-cutting measure for a company facing significant headwinds going into the new year. And technically, the law firm could maintain Murray Energy as a client while not reaching the threshold necessary to report its activities as a lobbyist. But to some, the contract termination signaled what the New Republic this month dubbed Murray’s “nearly complete takeover” of the EPA and raises new questions about Wheeler’s potential conflicts of interest.

“Murray Energy has cut out the middleman,” Judith Enck, a former administrator for the EPA region that includes New York and Puerto Rico, told HuffPost in an interview Monday. “They’ve got their pro-coal guy in the driver’s seat at the EPA.”

“They’ve got their pro-coal guy in the driver’s seat at the EPA.”

The past two years delivered Murray an unprecedented string of political victories, even as coal consumption hit a 39-year low and closures of coal-fired plants continued. An early and vocal Trump supporter, the Ohio-based chief executive donated $300,000 to the president’s inauguration and another $1 million to a pro-Trump political action committee, according to Center for Responsive Politics data. In March 2017, Murray drafted a wish list of policies submitted in the form of memos to the Energy Department—leaked photos show Wheeler, then a lobbyist, sitting beside the coal executive as he hugged Energy Secretary Rick Perry—and to Vice President Mike Pence.

Murray’s requests primarily targeted the EPA, urging draconian staff cuts, gutting a mercury regulation, and reversing a bevy of standards on pollution ranging from ozone to toxic coal ash to planet-warming carbon dioxide emissions. Of eight EPA policies Murray asked to be changed, the Trump administration took action on six, most of which were carried out since Wheeler took charge of the agency, Mother Jones reported.

In a telling moment, Wheeler proposed in December the rollback of an Obama-era rule requiring coal-fired plants to reduce carbon dioxide emissions in the midst of the year’s biggest global climate summit.

One reason Murray Energy may have terminated its contract with Faegre Baker Daniels is that, under the Trump administration’s own ethics pledge, officials cannot meet with former employers for two years after taking office.

“It’s possible that if Murray Energy goes to another firm, they could get a meeting before Wheeler personally,” said Virginia Canter, chief ethics counsel at the nonpartisan watchdog Citizens for Responsibility and Ethics in Washington. “Another lobbying firm, if that’s where they went, might be in a better position to move forward on Murray Energy’s more immediate interests.”

The ethics pledge might not be an impervious firewall. Two weeks ago, CREW filed a complaint with the EPA’s Office of the Inspector General alleging that Wheeler may have violated his ethics pledge by participating in matters on which he previously lobbied and by holding meetings with his former clients. The EPA called the allegation “baseless.”

But Wheeler’s two decades working for Murray became a sticking point at his confirmation hearing before the Senate Environment and Public Works Committee, where Sen. Sheldon Whitehouse (D-R.I.) criticized a “sweet regulatory relationship” between the coal executive and the Trump administration.

It’s difficult to determine how Murray’s business is doing because it’s privately held and doesn’t publicly report earnings, but there are some signs indicating financial distress. In April, Murray Energy warned that utility giant FirstEnergy Corp.’s decision to close bankrupt coal-fired power plants would cost “thousands of American jobs” in mining. The company started negotiating with bondholders last spring as it began feeling the squeeze of interest payments on $2.8 billion in debt plus hundreds of millions of dollars in health and other benefits to retired coal miners, the Wall Street Journal reported last year.

In October, FirstEnergy announced plans to postpone the retirement of the Pleasants Coal Plant in West Virginia from 2019 to 2022. But in December, a federal bankruptcy judge approved a contract settlement between Murray Energy and FirstEnergy.

The financial woes “can’t be helping Murray in whatever it’s doing,” Steve Piper, an energy analyst at S&P Global, said by phone. “The point’s well taken that Murray himself has lobbied the administration and Andrew Wheeler, his former lobbyist, is at the EPA.”