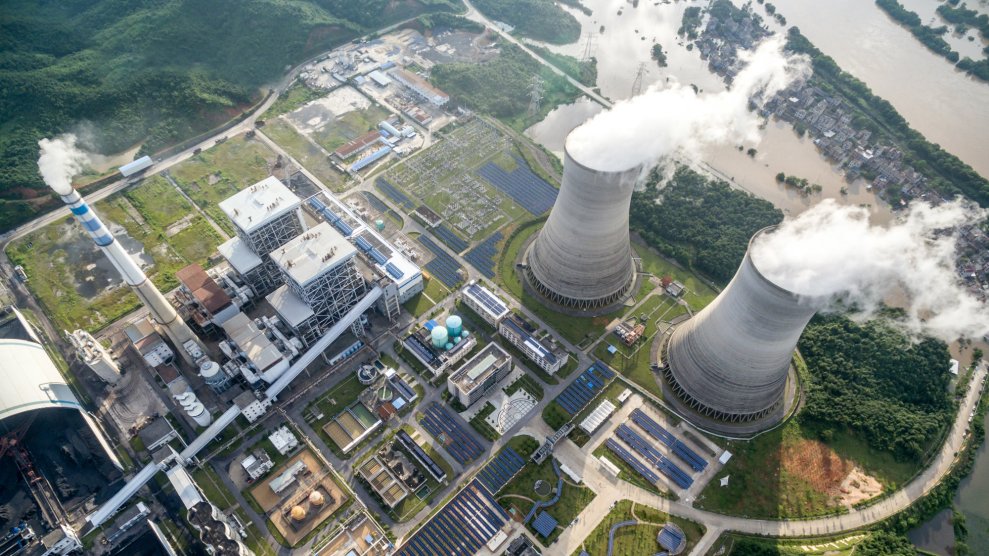 Fossil fuel companies have polluted the groundwater of communities across the country with poisonous chemicals. According to a new comprehensive study by the Environmental Integrity Project and Earthjustice, the groundwater beneath 91 percent of coal plants has been contaminated with coal ash, the byproduct of burning coal. The study’s conclusion? Coal-burning is not only contributing to climate change, it’s also doing widespread damage to the country’s water, and the Trump administration is making the problem worse.

“We’re facing a water crisis nationwide, caused by coal ash and perpetuated by the Trump administration,” Lisa Evans, senior counsel at Earthjustice, said on a national press call about the report. The report also found that the groundwater at 52 percent of coal plants had unsafe levels of arsenic, a neurotoxin that can lead to brain development issues in children. More than one-third of people in the United States rely on groundwater for drinking.

The country is producing “enough ash to fill train cars from New York City to Melbourne, Australia,” Evans explained. Each year, coal plants around the country produce 100 million tons of coal ash—which can contain a long list of pollutants detrimental to human health. For decades, companies dumped coal ash into unlined ponds and landfills, leaving the groundwater vulnerable to leaks and raising the risk of contaminating the drinking water.

The largest coal ash disaster to date occurred in 2008, when a retaining wall around the the Kingston Fossil Plant in Tennessee collapsed, releasing more than 1 billion gallons of the toxic material into two rivers. Seven years later, the Obama administration implemented a new rule that required groundwater testing near coal ash ponds, created standards for their construction, and required companies to clean up leaking coal ash ponds by the end of 2018.

This all changed with the Trump administration’s commitment to the revival of the coal industry and the appointment of coal lobbyists in key environmental agency roles. The first major rule signed by Andrew Wheeler, a former lobbyist and Scott Pruitt’s successor at the Environmental Protection Agency, was to roll back Obama’s coal ash regulation. “Wheeler is doing the bidding of dirty industry,” Evans said. Now, the coal industry can suspend groundwater monitoring at certain sites if the plant can prove it’s not contaminating it, and the deadline for cleaning up leaking ponds has been extended to 2020.

With more relaxed enforcement has come increasing pollution by coal companies. Near San Antonio, Texas, the San Miguel Power Plant is contaminating the groundwater with cadmium (a chemical classified by the EPA as a “probable” carcinogen) and lithium, a metal that can cause nerve damage. According to the report, the Peeler family, who owns a nearby cattle ranch, are worried about the pollutants seeping into their soil or the nearby river, which provides drinking water for several small towns. “We’re fighting San Miguel to clean up the mess they’ve made,” said Jason Peeler, a family member who spoke on the press call. In response, the company has attempted to use eminent domain to acquire the land. “Instead of cleaning up,” Peeler said, “they’re trying to just take away what my family has built for five generations.”

Researchers point out that even though it’s more difficult to determine exactly how coal ash contamination has affected the drinking water in nearby communities, there have been several instances. In 2004, the EPA declared Town of Pines, Indiana, a Superfund site after NIPSCO, a utility company, dumped coal ash into an unlined landfill and used the waste in roadway construction. The company provided clean drinking water to residents and removed pollutants from the town. In 2008, in Gambrills, Maryland, Constellation Energy was fined $1 million by the state, paid $45 million to the residents of this Baltimore-area small town, and provided an alternative drinking water source after it dumped coal waste into an old sand and gravel mine and contaminated their drinking water. More recently, Duke Energy, a North Carolina power company, agreed to pay $3 million after it spilled 39,000 tons of coal ash into the Dan River. The waste polluted residential wells and the company handed out bottled water to dozens of families who live near the plant.

The report paints a grim picture of just how much pollution coal plants are producing, but the authors say the full extent is hard to measure. According to the EPA, there are more than 1,000 coal ash disposal sites, and the authors of the report were only able to analyze 265 of them. According to Abel Russ, a senior attorney at the Environmental Integrity Project and one of the co-authors, “We’re understating the true scope of the problem.”