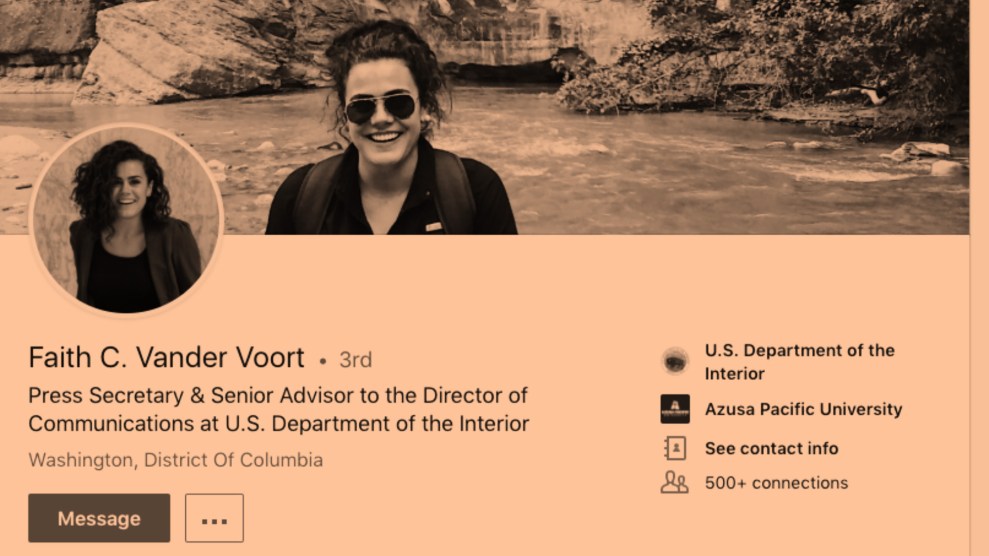 Faith Vander Voort, the newly promoted top spokeswoman at the Interior Department, voiced support for more surveillance of Muslim communities and argued that attacks by radical self-proclaimed Muslim groups pose a far bigger threat to society than climate change during a 2017 interview full of Islamophobic and anti-immigrant rhetoric.

The comments were made during a June 8, 2017, episode of “The Word,” a podcast of the now-defunct right-wing news outlet the Daily Nerv. Vander Voort co-founded the Daily Nerv in early 2017, about a year before she joined the Trump administration, and briefly co-produced and co-hosted the podcast, according to her resume on Interior’s website.

During the episode in question, Vander Voort says she does not believe it is a violation of individual civil liberties for intelligence agencies to monitor phones and internet activities—at least when it comes to surveillance of Muslim communities.

“I think that terrorists attacking us are the real infringement on our freedom,” she said. “Our freedom comes from our safety and ability to follow our dreams and live a happy and free life here in the United States. It doesn’t come from us being able to send whatever we want without anyone looking.”

The episode aired a few days after the deadly London Bridge attack—a tragedy that President Donald Trump used to promote his Muslim travel ban. It is chock full of the very anti-Muslim rhetoric that has emboldened extremists around the globe, and that is all but indistinguishable from white nationalist talking points.

HuffPost was alerted to the podcast last week, hours before a gunman opened fire at two mosques in New Zealand, killing at least 50 people. The suspect left behind an anti-immigrant, anti-Muslim manifesto in which he cited American white supremacy as an inspiration and called Trump “a symbol of renewed white identity and common purpose.”

The massacre brought into harsh light the alarming rise in Islamophobia. In the US, hate crimes against Muslims have skyrocketed, with civil rights organizations blaming Trump and his team for fueling bigotry against Muslims and other minorities. On the campaign trail, Trump embraced the idea of creating a database to track Muslims in the US and proclaimed, “I think Islam hates us.” For years, Muslim Americans have urged local and national political leaders to come out stronger and denounce Islamophobia, including by employees of the federal government.

Vander Voort has a history of Islamophobic comments. In a 2015 blog post that has since been deleted, she argued that a Muslim “could never serve” as president “because their own religion strictly prohibits them from taking an oath to anything other than Allah,” as HuffPost reported last year. She published the post while working as an intern for Rep. Steve King (Iowa), a GOP lawmaker who has repeatedly promoted anti-Muslim and white supremacist views. He has called on the US government to spy on mosques and said Muslims should have to reject Sharia law before entering the country. In another deleted blog post from 2015, Vander Voort called King “a man of principle” and said she “will always be proud to have my name tied to his for the rest of my professional career.”

In a statement to Politico after HuffPost’s previous story, then-Interior press secretary Heather Swift said it was “a new low for websites to attack a then-18-year-old college student for her journalism assignments.” Swift did not elaborate on what journalism assignment the post allegedly fulfilled.

The 2017 podcast aired shortly after Vander Voort graduated from Azusa Pacific University. In March 2018, she was hired as deputy press secretary to former Interior Secretary Ryan Zinke. David Bernhardt, the acting Interior secretary and Trump’s nominee to replace Zinke, promoted the 23-year-old to the position of press secretary earlier this month, as E&E News reported. Prior to joining the department, Vander Voort worked as a press secretary for Rep. Paul Gosar (R-Ariz.) and a political analyst for conservative Fox News commentator Angela McGlowan, according to her LinkedIn profile.

Along with the interview referenced above, Vander Voort co-hosted at least four early episodes of the podcast, according to information on the Daily Nerv website. Three of those episodes appear to have since been deleted from iTunes and the podcast platform Spreaker. The fourth, an interview with Ben Shapiro, a conservative pundit with a history of anti-Islam views, is among the vast majority of episodes still available online.

The first half of the June 8 show features host Eduardo Neret, now a contributor at the Washington Examiner, asserting that Islam threatens Western civilization. He says that terrorist attacks “are the same thing every bleeping time” and that “critical mass has been reached.” He blasts “dangerous apologists” who he says have “bent over backwards for Islam.” And he says “it shouldn’t be that hard” to turn away would-be Muslim immigrants “who we don’t know anything about” and “whose belief system doesn’t really match up with ours.”

After recounting that a London attacker reportedly said “this is for Islam” before stabbing one of the victims, Neret says it is “outrageous” that people continue to argue that Islam is a religion of peace and not connected to terrorism.

“You mindless, apologetic liberals. You enablers. You still think that this has nothing to do with religion?” he asked.

The second half of the podcast is a prerecorded interview with Vander Voort, who at the time was working as an intern for the House Republican Conference. She said “it’s become the norm” to expect attacks like the one days earlier in London and agreed with Neret when he said the “root problem” is “radical Islam and unvetted immigration.”

“I think that it’s completely asinine to say, ‘Oh, just expect terrorism,'” Vander Voort said. “This needs to change. We need to enact policy that changes this. We need to be tougher on immigration. We need to vet our immigrants and instill the ban that stops immigration from those six majority Muslim countries.”

Neret and Vander Voort later contend that Muslims must do more to help root out extremism.

“The Muslim communities need to speak out when someone is indicating that they want to hurt someone, that they want to act on these radical ideologies that are a part of the religion,” Vander Voort said. “We know that there are peaceful Muslims. And we need their help.”

It’s a call that not only suggests that Muslims have turned a blind eye to such behavior, but that Islam is the driving force of terrorism. Neret goes as far as to say that he not only wants to keep terrorists out of the US, but anyone who believes in Sharia law, the legal framework of Islam.

“To me, it’s just as dangerous, if not worse, in a different way,” he said.

Demanding that Muslims swear off Sharia law is an attack on religious liberty. And the notion that Muslims, a faith of 1.6 billion, are expected to condemn attacks by terrorists has been criticized by civil rights groups as hypocritical and “racist scapegoating.”

The interview also touched on Trump’s announcement a week earlier that he would pull the United States out of the historic Paris Agreement on combating climate change.

“We know the left has removed God from their core beliefs. And so to them, the planet is like their belief system,” he said. “The Paris accords, it was a way for liberals to remove guilt from themselves.”

Scientists the world over say that climate change is a growing threat to society and that humans are running out of time to stave off catastrophic warming. In a report last year, the United Nations warned that world governments must cut global emissions in half over the next 12 years to avoid warming of 1.5 degrees Celsius, beyond which climate change is forecast to cause $54 trillion in damages. And the World Health Organization estimates that climate change will cause an additional 250,000 deaths per year between 2030 and 2050.

Luke O’Brien contributed to this report.