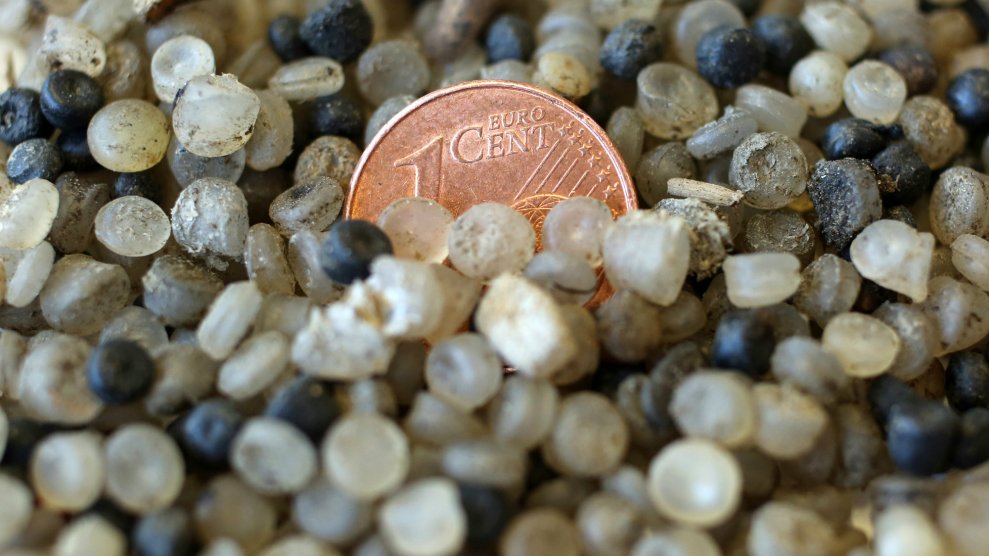 This story was originally published in The Guardian. It appears here as part of the Climate Desk collaboration.

Microplastic pollution spans the world, according to new studies showing contamination in the UK’s lake and rivers, in groundwater in the US and along the Yangtze river in China and the coast of Spain.

Humans are known to consume the tiny plastic particles via food and water, but the possible health effects on people and ecosystems have yet to be determined. One study, in Singapore, has found that microplastics can harbor harmful microbes.

The new analysis in the UK found microplastic pollution in all 10 lakes, rivers and reservoirs sampled. More than 1,000 small pieces of plastic per litre were found in the River Tame, near Manchester, which was revealed last year as the most contaminated place yet tested worldwide. Even in relatively remote places such as the Falls of Dochart and Loch Lomond in Scotland, two or three pieces per litre were found.

“It was startling. I wasn’t expecting to find as much as we did,” said Christian Dunn at Bangor University, Wales, who led the work. “It is quite depressing they were there in some of our country’s most iconic locations. I’m sure Wordsworth would not be happy to discover his beloved Ullswater in the Lake District was polluted with plastic.

“Microplastics are being found absolutely everywhere [but] we do not know the dangers they could be posing. It’s no use looking back in 20 years time and saying: ‘If only we’d realised just how bad it was.’ We need to be monitoring our waters now and we need to think, as a country and a world, how we can be reducing our reliance on plastic.”

The River Thames in London was found to have about 80 microplastic particles per litre, as was the River Cegin in North Wales. The Blackwater River in Essex had 15. Ullswater has 30 and the Llyn Cefni reservoir on Anglesey 40.

Microplastics have been shown to harm marine life when mistaken for food and were found inside every marine mammal studied in a recent UK survey. They were revealed in 2017 to be in tap water around the world and in October to be consumed by people in Europe, Japan and Russia.

“Microplastic has been found in our rivers, our highest mountains and our deepest oceans,” said Julian Kirby, a plastics campaigner at Friends of the Earth who helped collect water samples for the new UK study. He urged MPs to back legislation “to drastically reduce the flow of plastic pollution that’s blighting our environment”.

Research by the National University of Singapore found more than 400 types of bacteria on 275 pieces of microplastic collected from local beaches. They included bugs that cause gastroenteritis and wound infections in humans, as well as those linked to the bleaching of coral reefs.

Defined as smaller than 5mm in size, microplastics have also been found underground in limestone aquifers in Illinois, US, at a level of 15 particles per litre. This type of groundwater source provides about a quarter of the world’s drinking water.

Other recent studies have found microplastics in bottom-living creatures and sediments taken from the North Sea and the Barents Sea. High concentrations were also foundin the middle and lower reaches of the Yangtze River and along the Mediterranean coast of Spain.

Microplastics are shed by synthetic clothing, vehicle tyres and the spillage of plastic pellets used by manufacturers. The physical breakdown of plastic litter also creates them. Rain washes them into rivers and the sea, but they can also be blown by the wind and end up in fields when treated sewage waste is used as fertiliser.

Kirsten Thompson from the University of Exeter, who is working with Greenpeace on a survey of microplastics in the UK’s major rivers, said: “We hope our research will help uncover exactly where this plastic is coming from and what impact it may be having.”