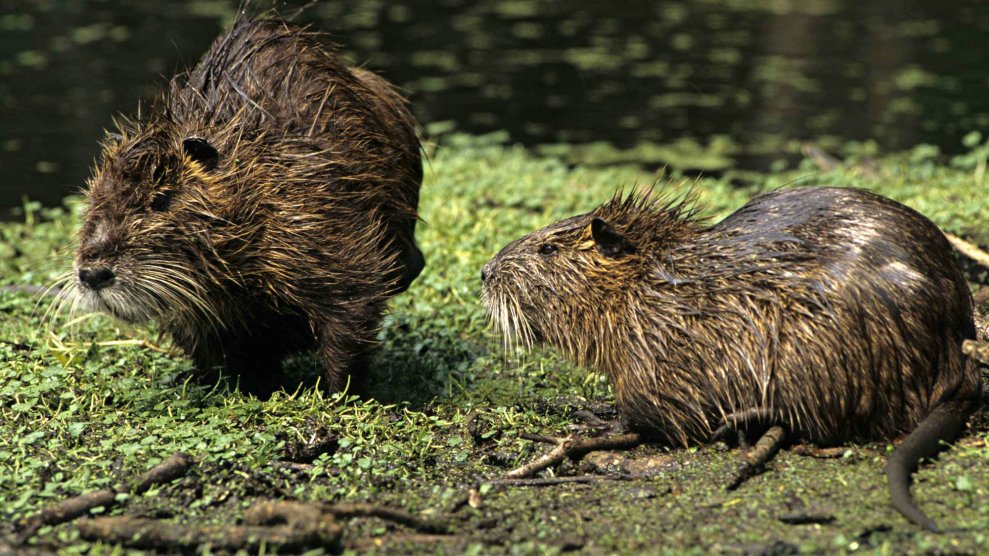 In 2010, an explosion on the Deepwater Horizon oil rig made an oil-soaked pelican the prevailing symbol of the precarious relationship between industry and the environment on Louisiana’s Gulf Coast. But long before the rig pumped 200 million gallons of crude oil into the Gulf of Mexico—and still today—the people of southern Louisiana have had another such symbol: Large, invasive, semi-aquatic rodents called nutria, which have been chewing up the marshes for decades.

A recent documentary, “Rodents of Unusual Size,” which premiered on PBS earlier this year and is now available on iTunes, explores the integration of nutria into Louisiana’s Gulf Coast through a host of characters. The documentary features nutria hunters, trappers, enthusiasts, and pelt-dealers. One nutria control specialist named Michael and his hunting dog George W. Bush track nutria on a golf course. Local New Orleans celebrities Kermit Ruffins, a musician, and Susan Spicer, a chef, each demonstrate how to cook their own version of the rodent. And women from a company called Righteous Fur prepare for a fashion show to demonstrate the sexiness of swamp rat.

The film’s primary protagonist, however, is a fisherman and trapper named Thomas Gonzalez, who participates in the state’s Coastwide Nutria Control Program, which has placed a $5 bounty on the rodent. Gonzalez lives on a shrinking patch of marsh in the community of Delacroix Island, 30 miles southeast of New Orleans.

By doing battle with the nutria, there is the sense that Gonzalez is fighting to maintain his way of life. But the precariousness of his situation also demonstrates the larger, unwieldy political, industrial, and environmental forces that the citizens of the region have been at the mercy of for years—forces that the new documentary touches on, but doesn’t explore in depth.

The excesses of the fur trade are part of a larger cycle, where coastal commercialization has come at an environmental cost. Even BP’s Deepwater Horizon oil spill, for all its damage, doesn’t capture the extent of the subtler daily degradation oil and gas companies have had on Louisiana’s wetlands. For decades, lax regulations from Louisiana’s Department of Natural Resources allowed the energy industry to dredge canals, drill wells, and extract oil. Between this industrialization and the effects of climate change, southern Louisiana’s situation is dire. According to the US Geological Survey, between 1985 and 2010, the state’s coast lost, on average, around a football field of wetlands every hour.

Mitigating the damage will take more than a determined band of rodent bounty hunters—it will require a concerted effort by the state, and eventually the nation at large, to commit to restoring and protecting wetlands, rather than treating them as collateral damage.

Native to South America, wild nutria established populations in Louisiana in the early 1940s after fur farms released the rodents intentionally, or the critters escaped. In the 1950s, the state encouraged the nutria to spread, to make up for the decline of the native muskrat population—the pelts of which were once the primary commodity of the local fur trade. The Louisiana Department of Wildlife and Fisheries (LDWF) argued nutria, “a docile and likable rodent,” would be a “Godsend” for the state’s economy. Whether or not anyone actually came to like the large rodent, which, on average weighs around 14 pounds and has long orange buck teeth, LDWF was right about the economic boon: Between 1962 and 1982, hunters and trappers harvested an average 1.3 million nutria each year in the Louisiana wetlands.

But a fur-market crash in the 1980s removed the incentives for trappers and left the nutria population unchecked. Initially, the state tried to save the marsh from the growing hordes of nutria by marketing the rodent as a culinary item, says Catherine Normand, a biologist at LDWF. The department enlisted celebrity chefs to create nutria recipes, and handed out samples at events along with stickers that read: “I ate nutria, and I liked it.” But the optics proved too great a hurdle. “It didn’t really take off,” says Normand, “because people can’t get over the fact that they have that long scaly tail that’s very, uh, very much like what a rat has.”

“It didn’t really take off because people can’t get over the fact that they have that long scaly tail that’s very, uh, very much like what a rat has.”

Following the nutria’s failed entry into the dining scene, LDWF tried another approach by replicating the conditions that had been keeping the nutria in check during the 60s and 70s. “They came up with the idea of essentially creating an artificial fur market,” says Normand. LDWF placed a $5 bounty on nutria and developed a system in which hunters and trappers sever the tails—which are distinctive from any other native mammals—and bring them to an assessor. Tails are also easier, Normand adds, to store in a freezer.

The control program enrolls around 250 active participants—many of them sustaining themselves between fishing and crabbing seasons, which have been greatly reduced thanks to both the BP spill and wetland loss—and aims to harvest 400,000 nutria each year. While the numbers fluctuate, Normand says the program has been quite successful in obtaining its goal of reducing nutria caused marsh damage. In 1999, before the program began, LDWF estimated that more than 100,000 acres of wetlands had been damaged by nutria. In 2017, the estimate was less than 5,900 acres.

Nutria rip out the stitching of the vegetation in Louisiana’s marshes, which allows the tides to hem the coast. The degradation is compounded: Without the root systems, when flooding occurs, and as sea levels rise from climate change, the marshes wash away. Because the marshes act as a buffer for hurricanes, the erosion allows storms to inflict more damage—on both the local communities and the wetlands themselves.

Because of the nature of this damage, “Rodents of Unusual Size” frames the participation of nutria hunters like Gonzalez as not just pecuniary, but existential. As the promotional blurb for the film puts it, the bounty hunters are “hellbent on saving Louisiana before it dissolves beneath their feet. It is man vs. rodent. May the best mammal win.” What the film briefly mentions, but does not explore, are the broader causes of wetland loss in Louisiana, which go far beyond the appetites of a single rodent. The film also fails to spell out how attempts to commercialize and industrialize the coast threatened to destroy it.

“When they were dredged, [the canals] may have been 50 feet wide, and now they’re three or four hundred feet wide. Some of them have just turned into open water, and you can’t even see where the canal was.”

While coastal degradation has happened, more or less, at the same time as the nutria expansion, there are multiple factors at play. “We’ve lost 1,900 square miles since 1932, when we first started seeing the issues of land loss,” says Jimmy Frederick, the communications director for the Coalition to Restore Coastal Louisiana, who points to several causes. The levee systems on the Mississippi River prevent necessary sediment from reaching the wetlands, which would normally restore the land. Oil and gas companies have dredged the canals, allowing saltwater to move north into the wetlands and accelerating erosion. “When they were dredged, [the canals] may have been 50 feet wide, and now they’re three or four hundred feet wide,” says Frederick. “Some of them have just turned into open water, and you can’t even see where the canal was.”

The extraction of oil and other minerals further depletes the fragile land. “In sum,” wrote Oliver Houck, a law professor at Tulane University, in the Tulane Environmental Law Journal in 2015, “oil and gas development had put Louisiana’s coastal wetlands in a double bind, torn apart on top and undermined from below.”

Just as hunters are being put to work by the state to limit the damage caused by the nutria fur trade, former oil field workers may also have the opportunity to rebuild the marshes destroyed, in part, by their former industry. In 2017, Louisiana presented its latest iteration of a Coastal Master Plan—an ambitious, $50 billion effort to combat wetland loss that is primarily funded, for now, with money from fines related to the BP oil spill. Louisiana claims the plan could create up to 10,300 new jobs on the Gulf Coast. “In addition,” the plan reads, “there is a good match between the skills that this work demands and the skills of many south Louisiana workers who have experience in the energy sector.”

Even with the master plan, hopes of returning Louisiana’s coast to its full natural glory have diminished. “What we’re hoping for, and what the science indicates, is that we won’t restore Louisiana’s coast to what it once was,” Frederick says. “But we can slow [erosion] down enough so that we can build land, and lose less.” To achieve even that moderated outcome, the plan will require federal tax dollars—which it currently isn’t receiving. “At some point that will have to change,” Frederick says.

“If we are going to complete this plan, we’re going to have to convince the rest of the country that Louisiana is worth saving.”

While “Rodents of Unusual Size” may simplify the issues, there is a certain satisfaction that comes from projecting the complex interaction of geologic tendencies, global climate change, corporate greed, governmental abdication, and lack of foresight onto a single giant rodent. And the temptation goes beyond explaining wetland loss. At one point in the documentary, Ruffins, the musician and amateur nutria chef, drives around the Lower 9th Ward giving the filmmakers a tour of his old neighborhood. He hits a bump in the road. “Potholes in New Orleans,” he says. “Probably the nutria.”