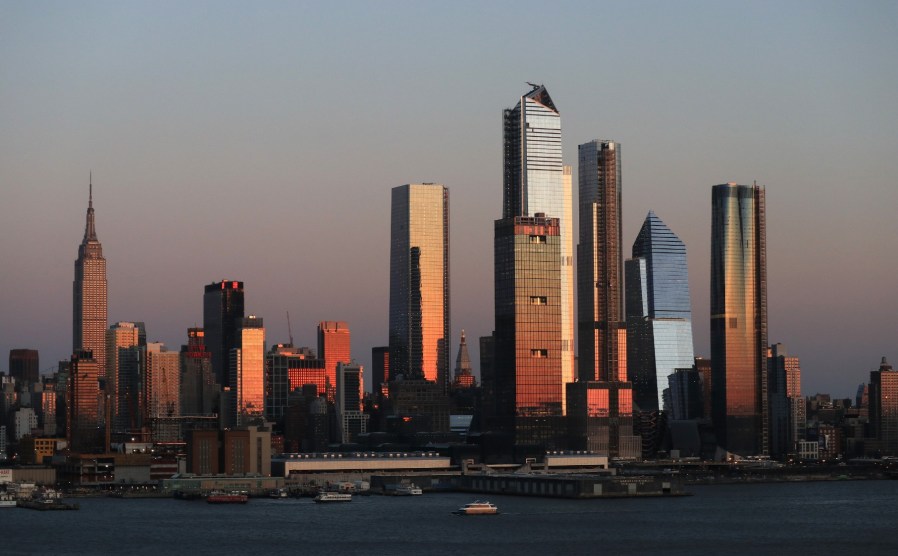 The City Council approved the legislation in a 45-to-2 vote Thursday afternoon, all but ensuring its passage by a mayor eager to burnish his climate bona fides ahead of a potential run for the Democratic presidential nomination in 2020.

“We are on the precipice of climate disaster, and New York City is acting,” Corey Johnson, the council speaker, said in a statement. “I hope other cities follow suit.”

The effort demonstrates one of the clearest examples yet of what a municipal version of the Green New Deal, the national movement for a multi-trillion dollar climate-friendly industrial plan, might look like. The legislation is forecast to spur thousands of blue-collar jobs and make it easier for the city to take advantage of future state and federal funding for clean energy projects and climate change-ready infrastructure.

“We are on the precipice of climate disaster, and New York City is acting. “

The measure, introduced by Councilman Costa Constantinides, a Democrat from Queens, is the centerpiece of a suite of six climate bills packaged together as the Climate Mobilization Act.

The legislation sets emissions caps for various types of buildings over 25,000 square feet; buildings produce nearly 70% of the city’s emissions. It sets steep fines if landlords miss the targets. Starting in 2024, the bill requires landlords to retrofit buildings with new windows, heating systems and insulation that would cut emissions by 40% in 2030, and double the cuts by 2050.

“This legislation will radically change the energy footprint of the built environment and will pay off in the long run with energy costs expected to rise and new business opportunities that will be generated by this forward thinking and radical policy,” said Timur Dogan, an architect and building scientist at Cornell University.

Its proponents bill the legislation as the largest single mandate to cut climate pollution by any city in the world. The new rules would create demand for more than 3,600 construction jobs per year, by one estimate, and another 4,400 jobs in maintenance, services and operations, fueled by the sheer magnitude of the investment required to meet the emissions goals.

“The market signals sent by this legislation are significant,” Nilda Mesa, a senior research scientist at Columbia University and a former director of the Mayor’s Office of Sustainability, wrote in Crain’s New York. “The largest real estate market in the U.S. will be seeking products and services to cut energy.”

The Climate Mobilization Act’s other components include a bill that orders the city to complete a study over the next two years on the feasibility of closing all 24 oil- and gas-burning power plants in city limits and replacing them with renewables and batteries. Another that establishes a renewable energy loan program. Two more that require certain buildings to cover roofs with plants, solar panels, small wind turbines or a mix of the three. And a final bill that tweaks the city’s building code to make it easier to build wind turbines.

The cost to landlords is high. The mayor’s office estimated to The New York Times that the total cost of upgrades needed to meet the new requirements would hit $4 billion.

There are loopholes for houses of worship and buildings with at least one rent-regulated apartment in hopes of preventing the law from triggering large-scale improvements that would allow landlords to jack up rent and evict working-class tenants. The Real Estate Board of New York, the powerful lobby that represents large developers and property owners, came out against the legislation last year, arguing it provided too many carve-outs for smaller buildings and put an unfair burden on big landlords.

But the lawmakers forged ahead anyway, vowing to update the legislation if state legislators in Albany win better protections later this year for the city’s dwindling stock of roughly 990,000 rent-regulated apartments.

The policies omitted from the Climate Mobilization Act are significant. The package does not include an existing bill that proposes creating a new city agency to direct and oversee New York’s adaptation efforts, or another mandating all-electric school buses. Those are expected to come up for a vote later this year.

Other proposals have yet to make it into legislation. Those include a plan to close the notorious prison on Rikers Island and convert the 413-acre facility into a solar farm, water treatment plant and a blueprint for a wind energy manufacturing hub on the rapidly gentrifying industrial waterfront of Brooklyn’s Sunset Park neighborhood.

Nor does the legislation set a 100% renewable electricity target for the city that goes beyond the existing rules for city-owned buildings—something New York City is likely to face greater pressure to do since the Chicago City Council voted to adopt a similar measure last week.

The bill is an imitable first step for a city with a gross domestic product large enough to rank in the top 20 economies. But it represents low-hanging fruit. Nearly 70 percent of New Yorkers live in Brooklyn and Queens, boroughs on the western tip of Long Island, a glacial moraine.

Still, backers of the bill were elated on Thursday.