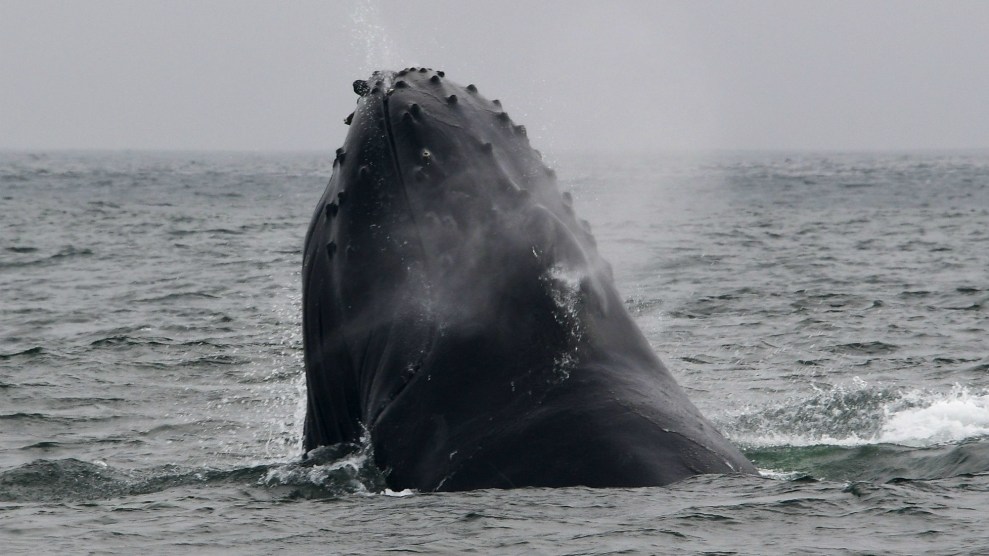 California’s Monterey Bay is one of the more pure, more dynamic coastal ecosystems on Earth. Otters—once hunted nearly to extinction—float among towering kelp forests, which themselves have rebounded thanks to the booming otter population’s appetite for kelp-loving sea urchins. Great whites visit from time to time, as do all manner of whales and dolphins. All told, it’s one of the greatest success stories in the history of oceanic conservation.

Yet it’s poisoned with a menace no amount of conservation can stop: microplastic. Today in the journal Nature Scientific Reports, researchers present a torrent of horrifying findings about just how bad the plastic problem has become. For one, microplastic is swirling in Monterey Bay’s water column at every depth they sampled, sometimes in concentrations greater than at the surface of the infamous Great Pacific Garbage Patch. Two, those plastics are coming from land, not local fishing nets, and are weathered, suggesting they’ve been floating around for a long while. And three, every animal the researchers found—some that make up the base of the food web in the bay—were loaded with microplastic.

To get their samples, the researchers used ROVs outfitted with specialized samplers, which pumped large volumes of seawater through a mesh filter. Plastics are so ubiquitous in human inventions, however, that they had to make sure the ROV itself didn’t taint their samples.

The researchers found the amount of microplastic captured at the surface is about the same as it is down at 3,200 feet. But between 650 and 2,000 feet, the counts skyrocket.

Scientists have suspected that ocean plastics aren’t necessarily concentrated at the surface, contrary to what you’d assume given the Great Pacific Garbage Patch. This is one big reason why they’ve scoffed at the idea of the Ocean Cleanup project, which is essentially a giant tube for catching surface plastic. It snapped shortly after its deployment in the Patch. But until now no one has gathered good data on what that distribution of plastic looks like up and down the water column.

“We know how much plastic is going into the ocean, and we kind of have a rough idea of what’s at the surface of the ocean, but those numbers don’t really match.”

“We know how much plastic is going into the ocean, and we kind of have a rough idea of what’s at the surface of the ocean, but those numbers don’t really match,” says oceanographer Kim Martini, who wasn’t involved in this work. “So from a budgeting point of view, it has to go someplace else, and we think it goes to the deep ocean. This is another piece of that puzzle.”

A still outstanding piece of that puzzle, though, is where this microplastic is coming from. By running tests in the lab, the researchers found that most of the particles they collected were PET, a component of single-use plastics. Then the question becomes, where are things like plastic bottles breaking down into microplastic in the sea? Does it happen at the surface, or do the bottles sink and then break down? How do the tiny particles swirl in currents? All important questions for future research.

What was clear from this work, though, is that the microplastic is weathered, suggesting particles had been floating around for perhaps years. “Just like a library book that’s been in circulation for 20, 30 years versus something that’s shrink-wrapped that’s just come in the mail to your front doorstep, their condition is very different, though they’re the same book,” says Kyle Van Houtan, chief scientist at the Monterey Bay Aquarium and a coauthor on the new paper.

These old plastics aren’t just floating around harmlessly—they’re making their way into animals. The researchers concentrated on two species, pelagic red crabs and giant larvaceans, bizarre critters that make mucus nets to catch food. They found that all specimens carried microplastic, suggesting that both currents and animals transport plastic around the ecosystem.

Take the pelagic red crab. “It’s like popcorn shrimp for bluefin tuna, humpback whales, migratory birds like albatross,” says Van Houtan. When a pelagic red crab becomes someone’s lunch, it can bring microplastic from the depths up to the surface.

Not helping matters is the fact that Monterey Bay is an extraordinarily productive ecosystem. “The largest migration on the planet is not birds flying south from the forests of North America to the tropics every year,” says Van Houtan. “It’s the vertical migration that happens every day in the ocean, where everything from zooplankton to even air breathers move up and down the water column.” During the day, smaller, more vulnerable organisms retreat to the darkness of the depths and return to the surface under the cover of darkness. In doing so, they’re dragging the food web through the water column, unwittingly spreading the plague that is microplastic.

Only recently have researchers begun to test what happens when creatures ingest the stuff. “They’ve reported effects on kidney function, liver function, reproductive effects, but these are mainly in laboratory settings,” says Scripps Institution of Oceanography researcher Anela Choy, lead author on the new paper. “So how that extrapolates to the real world, we’re not quite there yet.”

Organisms might not need to ingest microplastic to be affected by it. Last month, researchers published a paper showing how chemicals that plastics leach into the water, known as leachates, inhibit the growth of the marine bacteria that provide perhaps 20 percent of the air we breathe and also capture carbon from the atmosphere. But this too was done in the lab, so it’s hard to tell yet if it’s a problem out in the wild.

What is increasingly clear, though, is that few places on Earth seem to left untouched by plastics. Even supposedly pristine mountaintops collect microplastic blowing in the wind. Short of someone inventing a magnet that somehow attracts microplastic, there’s no way we can rid Monterey Bay of this disease. But this new analysis points a big finger at who we can hold responsible: makers of single-use plastics.

Short of humanity completely phasing out plastics, Monterey Bay will never be the same again. Once again, we’ve failed a treasure of the natural world.