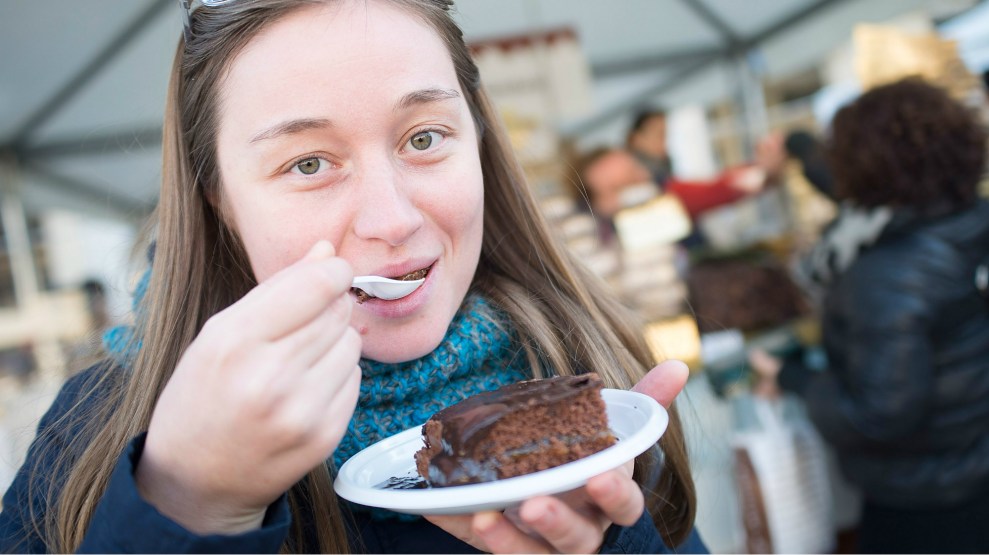 These chemicals take millennia to break down and have negative health consequences, and Tuesday the FDA revealed they exist throughout the US food supply. Concerns about per- and polyfluoroalkyl substances (PFAS), have typically been associated more with water than food. But when the FDA decided to look at the food supply, they found considerable levels of these “forever chemicals” in certain seafood, off-the-shelf chocolate cake, and some grocery store meats.

As Jamie C. DeWitt, a toxicologist who researches PFAS at East Carolina University, told Mother Jones, the FDA finding “tells us that drinking water is not our only source of exposure.”

According to the FDA, almost 5,000 types of PFAS exist. First developed in the 1940’s, they were seen as remarkably versatile since they do not allow grease, water, or oil to penetrate any material that had been treated by them. As a result, PFAS can be found in a broad range of products from stain- and water-resistant fabrics and carpeting, cleaning products, paints and fire-fighting foams, in addition to “limited, authorized uses” in cookware and food packaging.

Over time, however, it was discovered that exposure to PFAS chemicals can increase the risk of cancer, increase cholesterol levels, affect the immune system, and interfere with the body’s hormones, according to the Agency for Toxic Substances and Disease Registry.

Right now, the Environmental Protection Agency drinking water advisory for PFAS remains the only guideline the federal government has set for PFAS chemicals. By the end of this year, the EPA will propose a long-awaited regulation on PFAS. The FDA established an internal agency PFAS workgroup to establish base-line levels for PFAS in foods.

The FDA has expanded their testing over the past year to analyze PFAS levels in foods “typically eaten by Americans” and not sampled from specific contamination areas. The agency said this is the first time they’ve “tested for PFAS in such a highly diverse sample of foods.”

In their press announcement Tuesday, the FDA said they believed the PFAS contamination found in 14 samples out of 91 were “not likely to be [a] health concern.” Meanwhile, their testing revealed “forever chemical” levels surpassing 70 parts per trillion (the existing federal recommendation for PFAS in drinking water) in samples of turkey, tilapia, baked cod, salmon, steak, lamb chop, shrimp, chicken thighs, and catfish. The chocolate cake had levels over 250 times that of federal guidelines.

Federal agencies such as the EPA, have been slow to regulate chemicals, especially under the Trump administration, but there has been a recent bipartisan push in Congress to address PFAS, for example by banning new uses or development of PFAS chemicals, with at least 20 bills introduced this session, according to The Hill.

“These compounds are in the environment. We know that they build up in our bodies. They produce adverse health outcomes,” said DeWitt. “I think it’s time to make a decision so that people can be protected.”