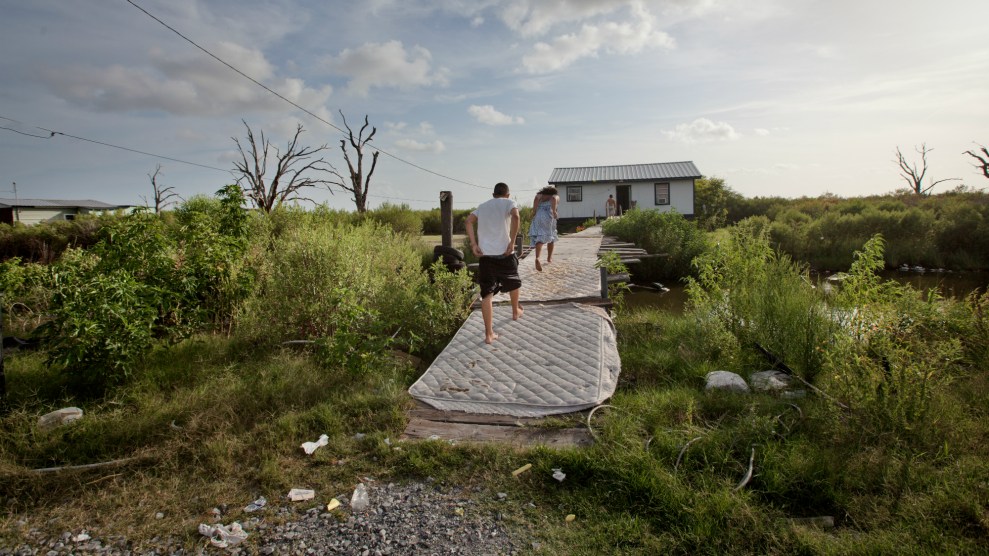 Children in the Biloxi-Chimacha-Choctaw tribe run over a bridge that crosses a bayou to get to their home on Isle de Jean Charles in 2012.Julie Dermansky/Corbis/Getty

In the 19th century, when the Indian Removal Act became law, Native Americans were forced off of their land. In Louisiana, some fled to what is now Isle de Jean Charles in Terrebonne Parish, which was then considered to be “uninhabitable swamp land.” For years, the community that mostly consisted of members of the Biloxi-Chitimacha-Choctaw tribe, worked as fishermen, oystermen, or trappers. But since 1955, because of a combination of oil extraction, hurricanes, and sea level rise, Isle de Jean Charles has lost 98 percent of its land. “Once 5 miles wide and filled with lush cypress groves and cow pastures,” the US Geological Survey reported in 2017, “barely a half-square mile of the island remains above water.”

In 2016, the Department of Housing and Urban Development recognized the severity of the problem and issued a $48.3 million grant to resettle the 99 residents of this community. The New York Times described the grant as “the first allocation of federal tax dollars to move an entire community struggling with the impacts of climate change,” calling the island’s residents America’s first climate refugees.

On Saturday, the National Weather Service projects Tropical Storm Barry will make landfall along the northern Gulf Coast, likely causing major flooding in parts of Louisiana, Mississippi, Alabama, and Arkansas. High winds and storm-surge flooding are expected in coastal areas. And those who still remain on Isle de Jean Charles are likely to be affected, although it is impossible to predict how badly.

“It is frustrating. Another hurricane season and we have to make sure people are safe,” Chantel Comardelle, tribal secretary of the Biloxi-Chitimacha-Choctaw, tells Mother Jones. She and her mother moved off of the island to Homa in the 1980s after their trailer flooded during a storm, but Comardelle’s grandmother still lives on Isle de Jean Charles.

“We would have hoped our folks would have been in the resettlement already and in a safe environment.”

“We would have hoped our folks would have been in the resettlement already and in a safe environment,” she says, adding that her grandmother, who is staying with Comardelle’s mom to ride out Barry is “ready to go home.”

The island’s vulnerability raises questions about the speed of efforts to relocate residents, as the region is bracing for yet another storm. Although the grant had first been announced in 2016 and the process of relocating an entire community takes time, the speed of impacts from climate change doesn’t take government’s red tape into account. In 2018, the Louisiana Land Trust, on behalf of the state, purchased the resettlement site, about 40 miles north of Isle de Jean Charles, consisting of 515 acres of rural land in Terrebonne Parish—a region of southern Louisiana that has been dubbed “the bathtub” because of its frequent flooding.

About 20 households still reside on Isle de Jean Charles, while another 20 already moved to live in apartments 25 minutes north of the island, awaiting the buildout of the new resettlement.

“We recognized in the beginning that we were going to have to make it through two or three hurricane seasons to get the new community built,” said Pat Forbes, executive director of the Louisiana Office of Community Development.

Terrebonne Parish President Gordon Dove has called for voluntary evacuation in most areas. “The more information we get, the more concerned we are it’s going to be an extreme rain event for large portions of the state,” Gov. John Bel Edwards said Thursday. There had already been heavy flooding in New Orleans earlier in the week as a prelude to the larger storm.

“It’s a beautiful day in Louisiana today actually,” Mathew Sanders, the manager of the Isle de Jean Charles resettlement, said on Thursday. “It’s a thing that tends to happen before we experience tropical events.” He noted that most island residents have already evacuated because of Barry’s imminent arrival, but a few families remained as of Thursday afternoon.

Forbes said that when last they checked, which was around noon Thursday, the only road that leads to Isle de Jean Charles was still passable, but the storm had not yet made landfall. The road becomes overrun with water often, sometimes on high tide. As the website for the Isle de Jean Charles band of Biloxi-Chitimacha-Choctaw Tribe observes, “Today, the land that has sustained us for generations is vanishing before our eyes.”